Driving in Portland, OR

Driving in Portland, OR 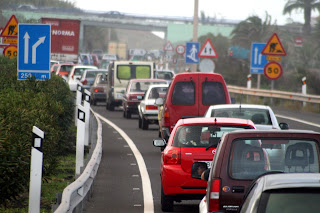 by Warren Bull
Do you remember the Missing Person’s hit Walking In LA?  It was written by Terry Bozzio.   The refrain I remember is “Nobody walks in LA.”  I’m in Portland Oregon for my nephew’s wedding.  Here it seems half the population drives and half moves about by foot, bicycle, wheelchair, skate board or by any number of contraptions that defy easy categorization.

It seems they mostly move where I would if I could.  Cyclists pedal around cars stopped at a red light to station their bikes in the front of the line.  I keep thinking there are places in the world where drivers would interpret that behavior as an offer to play bumper pool. If you have seen pictures of neurons firing inside an active mind, you have a rough approximation of the patterns of street construction. If you mentally add two rivers and street construction, you get closer.  Now imagine many one-way streets, some of which switch from two way to one way for no reason I’ve been able to conjer up.

Everybody is so friendly with parked cars and passing trains wanting to cuddle up right next to where I was driving. I flinch frequently. It becomes painfully clear that just because you figured out how to get somewhere, that doesn’t mean you know how to return to your original location.

Our rental car experience was a first.  Even though I’ve had many problems with rentals.  Once on Christmas Eve I showed up at an airport to pick up a rental. There was a problem. It wasn’t that they ran out of cars.  It was that the entire office had closed months earlier.  I was not notified even though I had reserved a car at that office over the phone. Another time I took a car with the inner tube bulging through a slash in one of the back tires. It looked like bubblegum. Thankfully, another driver noticed it and let me know.

This time the car was well maintained, the knobs and doohinkies worked.  The problem was the driver’s side seat would not move backward far enough for me to get into the car, read the instruments and turn the steering wheel.  My wife, who fits neatly right under my chin, had the seat at the maximum distance when she drove.

Mr. Toyota, your 2015 Corolla LE models do not fit many people who might like to purchase and buy them.  People, if you are considering buying one, bring everyone who might drive along with you.  I didn’t fit and I am less than six feet tall.

We replaced the car in lieu of replacing the driver. Although after driving in PortIand, I might have preferred the other option.
Posted by Warren Bull at 12:00 AM

I've driven in Portland a couple of different times, Warren. Indeed it is a bike-friendly city and the downtown area has lots of pedestrians. When I travel I bring my Garmin with me and "Sam" {short for Samantha, as we named the Garmin voice} does an excellent job (although not perfect) of navigating the one-way streets and construction.

As backup we also have map software on our phones, but generally find Sam is more accurate.

For us, Sam is the new don't leave home without it.

Rental cars are a nightmare. Each time we travel to England to visit family, we reserve a small rental car so that we can easily get around in small villages and narrow roads. Invariably, we get upgraded to a much larger car, which makes us a nervous wreck. This past trip, my husband backed into a low stone wall he couldn't see and we had slight damage. We paid for the damage, submitted the claim to our credit card company, and they reimbursed us. No problem. If we had known it would be that easy, we wouldn't have been so nervous all these years. Now we wish that damage had occurred on our first visit instead of all these years later. Note: Make sure your credit card provides collision damage waiver before you rely on this coverage. Also, reserve a small, less expensive car since they don't keep many of those in stock in London, and you will certainly be upgraded. That is, if you want to be.

Your description of driving in Portland reminds me of a pinball machine with people and cars pinging from point to point almost smacking into each other. And I thought driving in D.C. during tourist season was hazardous.