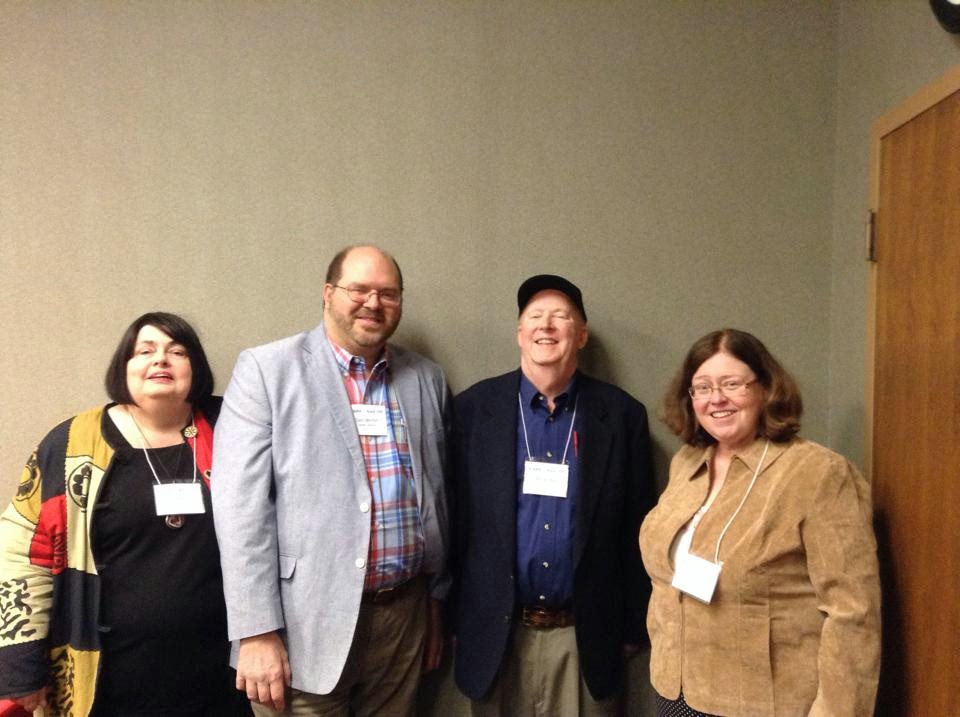 Have you ever been so hot and dehydrated on a blazing summer day, that when you stop for a drink, you can actually feel the chill of the water advance in your veins and replenish you?

I found, much to my delight, literary conferences have the same effect.

On February 7, I had the honor of participating in Murder in the Magic City, a mystery lovers conference held in Birmingham, Alabama. I appeared with fellow WWK bloggers, Paula Benson, Warren Bull, and Linda Rodriguez.

Hank is an investigative reporter for Boston's NBC affiliate. Winner of 32 EMMYs and 12 Edward R. Murrow awards, she is also the bestselling author of seven mystery novels. Hank has won several prestigious awards for her crime fiction: three Agathas, the Anthony, Daphne, Macavity, and the coveted Mary Higgins Clark Award. Her 2013 novel, THE WRONG GIRL, has the extraordinary honor of winning the Agatha Award for Best Contemporary Novel and the Daphne Award for Mainstream Mystery/Suspense, and is a seven-week Boston Globe bestseller. Her newest hardcover, TRUTH BE TOLD, is now nominated for an Agatha Award.

Just in case you’re wondering, the “Hank” moniker is derived from her actual name, “Harriet.” She said when she came of age, all the cool girls had in-vogue names like “Debbie.” So Harriet, a decidedly uncool name, became the very hip Hank.

Craig Johnson, a working rancher, lives in Ucross, Wyoming where only 24 other people live, one of whom is also named Craig Johnson, which turns out to be problematic at times. Why? Because he, the first Craig, is a author of eight novels in the Walt Longmire mystery series, which has garnered popular and critical acclaim, and is the basis for the hit A&E drama, Longmire, starring Robert Taylor, Lou Diamond Phillips, and Katee Sackoff.

His novel THE COLD DISH was a Dilys Award finalist, and the French edition won Le Prix du Polar Nouvel Observateur/BibliObs. DEATH WITHOUT COMPANY, the Wyoming State Historical Association’s Book of the Year, won France’s Le Prix 813. ANOTHER MAN’S MOCCASINS was the Western Writers of America’s Spur Award winner and the Mountains & Plains Independent Booksellers’ Book of the Year. THE DARK HORSE was a Publishers Weekly Best Book of the Year. Craig has won the Watson Award for a mystery novel with the best sidekick, and HELL IS EMPTY was selected by Library Journal as the Best Mystery of the Year. Two of Craig’s novels have reached the New York Times bestseller list.

Here’s where the replenish part comes in. These two magnificent authors are in a completely different stratosphere than the rest of us, but you would never know it. They were sincere and genuinely nice folks to mingle and talk with. They attended all the panels, and if they were not a part of the discussion, they listened to other authors’ presentations. They shared and laughed and seemed to enjoy our presence as much as we enjoyed theirs.

In the course of events, I learned the valuable lesson of how to murder someone in several different ways, some of which don’t even look like murder at all. I learned about voice, character development, and the popular resurgence of the short story as an art form.

But mostly I benefitted from delightful and insightful conversations with Warren, Larissa, Stacy, Robert, Paula, and Terrie to the extent that I couldn’t wait to get my fingers on a keyboard. I listened to Linda’s mellifluous voice, discovered her story, and imagined all the characters and scenarios I could base on her words alone. The conference both validated and inspired me, and I felt refreshed.

What are some of your favorite conferences?
Posted by Sam Morton at 12:00 AM

Sam, I'm so glad you enjoyed and gained inspiration from Murder in the Magic City. I have always loved this conference for the closeness and camaraderie between author guests and panelists and audience of authors and readers. The opportunity to be there with you and other WWK blogging partners made the event more special this year. Thanks for a terrific writing weekend!

I had a wonderful time last year participating in Murder in the Magic City and Murder on the Menu. They are fun conferences and I, too, got to meet people in person who I had only known online.

Jan and I had a great time at Left Coast Crime last year and are going back again this year. Of the conferences I have attended it is the best organized, bar none.

It was a great conference. I met a writer who used to wrestle professionally under the name "Southern Patriot." He was a hoot.

It sounds like a great conference, Sam, and one I wish I could attend some day. However, I am limited to no more than two a year and usually only one. And that one is Malice Domestic which is close enough to drive to in 8 hours. I've met many of the people you've met there and I agree no matter how well known an author is with numerous awards, you would never know it when talking with them. They're like the friend next door who might stop by for coffee and conversation. I wonder if this just applies to the mystery genre?

Murder in the Magic City sounds like an enjoyable and interesting conference. I love your descriptions, Sam. I always imagined that Linda's voice would be as beautiful as her writing.

I love conferences, but can only manage a few. Malice Domestic has been my favorite. I'm planning to go to Bouchercon for the first time this year.

So glad the conference "refreshed" you, Sam. I hope to attend one of these years.