I Dream of David Austin Roses

Shakespeare may have said a rose by any other name smells as sweet, but I beg to differ.  He’d never seen a David Austin rose catalog.

Just after the latest snow squall, our faithful mailman launched a hefty David Austin® Handbook of Roses 2015 catalog through the mail slot. What a jolt of color! As gray clouds blotted out the sun and sleet splattered the windows, I turned page after page of summer. 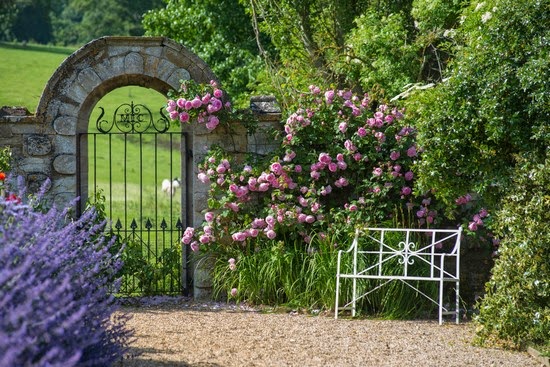 David Austin is a horticulturalist who combines science and art to conjure some of the most beautiful roses in existence. His English roses blend attributes of Old Roses and Modern Hybrid Teas and Floribundas into a rose that embodies charm, fragrance, and romance. Picture the perfect English cottage in the perfect English village. Now picture roses tumbling over the cottage wall or climbing an arbor over the front door. That rose of your imagination is made real by David Austin’s scientific artistry. And not only are the roses beautiful and fragrant (and expensive), they are resistant to disease.

Could one survive the Blackest Thumb in Virginia? My kids tease that I like the blackened petals that are the inevitable result of my gardening, and actually I do think there is an unexpected beauty in even my deadest victims, er, plants.

David Austin roses are essentially English. Their names evoke history and tradition: Thomas a Becket, Maid Marion, Scepter’d Isle. The Lichfield Angel, a creamy white, is inspired by the Lichfield Angel, a limestone sculpture panel from Lichfield Cathedral. The heavenly The Lark Ascending rose is named for the musical work by Ralph Vaughan Willliams.

In the David Austin® Handbook of Roses 2015, literary allusions tumble like visual poetry over a cottage fence: Tess of the d’Urbervilles (with a “lovely Old Rose fragrance”); the soft pink A Shropshire Lad™, named for the work by A. E. Housman; the flamboyant orange, red, and gold Lady of Shalott.

Jude the Obscure, named for the character in the Thomas Hardy novel of the same name, is a pale, almost shy, yellow. Heathcliff ™is a dangerously deep crimson. The catalog states “few roses are as popular as this one, and few so difficult to breed.”

The mystery fan in me wants the many-petaled Brother Cadfael™, named for Ellis Peters’ medieval detective.

Did you notice the ™? Many of David Austin’s roses are ™. I try not to let this intrusion, like an IRS audit at a tea party, pull me out of my springtime reverie.

David Austin roses may evoke English gentility, but there is a rose named for Horatio Nelson’s lover. The Lady Emma Hamilton rose, an indiscreet, fiery coral color, is, the catalog assures me, perfect for “creating a little excitement in the border.”

So, Writers Who Kill, do you have a black thumb or a green? How do you bring some color into these gray, snowy days?
Posted by Shari Randall at 12:00 AM

If plants can survive my lack of attention, they are tough in deed.

Shari -- one of the disadvantages of living with northern and southern abodes is the inability to have houseplants (I was great with hydroponics and African violets) or outside plantings that require any care.

I have to make do with what nature plants and fertilizes and waters and prunes on her own.

I buy enough paper white narcissus bulbs to last through the winter, filling the kitchen with their spicy scent. The potted amaryllis has lovely leaves; I'm wondering if a flower will ever emerge. I'm with you on the roses, though the logistics of growing them in Cincinnati defeated me; I have luxuriant knockout roses and beds of perennials.

Thank you for reminding us about the beauty of summer during these bleak midwinter days.

My thumb was greener when I lived in warm and sunny Southern California. Now that I'm in the D.C area I have enlarged photos of flowers in frames hanging on the wall for color. No need to water or fertilize them, just dust.

Warren, I've moved to succulents. So far I haven't been able to kill them. But stay tuned.

Jim - you've ended up in some places where Mother Nature spoils you! She is the great gardener.
Did I mention that when I nominated your book it had a "Hot" label? That must mean good things, right?

Margaret, I love the scent of narcissus too! Absolutely wonderful. I keep hearing about knockout roses - are they indestructible? Could be a better choice for me. Here in Virginia we've got to contend with clay soil - it's the pits. Thanks for stopping by WWK!

Hi Kara - Can't stop laughing! Yes, framed flowers may be the way to go. Or plastic, which my kids keep suggesting.

I'm terrible with plants -- I killed bamboo which is very hard to do. However, a friend gave me a houseplant of some sort in either 2008 or 2009 that is still alive. It survived a move from New England to northern Virginia. It survived neglect -- someone should call the plant police on me. It survived being divided into two pots. Scientists should study this plant. I'll give you a cutting, Shari.

Shari -- Yes the "Hot" label indicates which books on the Amazon Scout nomination program are recently receiving the most nominations.

I have been fortunate that since Ant Farm, entered the list five days ago, it has remained Hot.

I have every appendage crossed that this works out. Thanks for your nomination.


Shari, such lovely pictures. It makes me eager for late spring when my roses start to bloom. I have the Brother Cadfael rose,too. When I saw it in a garden center, I had to have it to put in my Saint Fiacre bed. Saint Fiacre is the patron saint of gardeners, but most people think it's St. Francis. I have a statue of him in my first book THE BLUE ROSE, and when I found a statue of him in that same garden center, I had to have that, too. Most of the plants in this bed have some type of religious name. I have the rose Our Lady of Guadaloupe in there as well as some daylilies like Mother Superior and Village Church to name a few.

Sherry, you killed bamboo! You are one bad hombre. I'll try that cutting - must be one very hardy plant.

Gloria - I am fascinated by St. Fiacre. Despite my Catholic school upbringing, I have an very vague memory of him. Your themed garden sounds wonderful. I hope you'll share pictures when it is in bloom.

I've got a big old cactus that seems to have survived my black thumb. I once had an apartment that faced southeast--anything I tried grew there. It spoiled me. Now, I have little luck at growing anything.

I found a cheap flight on Frontier airlines to Florida. Visiting my sister for two weeks might get me through the hump of winter.

Thanks for reminding us all of spring, Shari. Beautiful pictures!

I love daffodils and narcissus in spring. I have too many deer around to plant tulips--I end up with a lovely row of plants with nice stalks, the tulips buds neatly bitten off each one.

I used to intermix the daffodils with day lilies, which gave me two nice sessions of blooms, but then the deer discovered that the day lily blossoms are quite tasty.

At one point, we adopted a retired Seeing Eye dog. She was a wonderful, conscientious creature who tried hard to do whatever she thought a good dog should do. When we first got her, I had her out with me while I planted 200 daffodils in a utility cut that runs on the edge of our property. When I got done, I discovered that she had been following me, digging up the bulbs and piling them carefully by the front door. I think she thought I had lost them.

I had a dog follow me down the beach while I was shelling this summer. He thought I was holding dog treats. Where his owners were I had no idea (so much for leash laws). I finally held a shell out to him to convince him I had no dog treats--and he tried to eat the seashell! I got the shell away from him before he swallowed it. The dog must have had no sense of smell, which is very unusual. He followed me back to where I sat with friends--who had dog treats. Stupid dog finally got his treat. After he ate the treat, his owners ran up and got him. Funny timing.


KM, I should feel sorry for you for what she did, but it had to make me laugh. That was a lot of daffodils to replant.

KM, I can just picture that dog following you and digging up the bulbs. What a sweetie - he thought he was helping. I hope the deer stay away from any of your future plantings.

Shari, I don't have a green thumb, but I garden every spring and summer anyway. (I start seeds inside, which is fun.) I love receiving gardening catalogs while it's still cold out! Your David Austin catalog sounds amazing. Sherry's story about the bamboo is hilarious. I need a cutting of her everlasting plant, too.

Hi Susan, thanks for stopping by! Looking at the catalogs is so much fun - especially on days like today. I'm up for Sherry's indestructible plant. The only other plant I've done well with is Stella D'Oro day lilies, which have managed to survive living with me for quite a few years.

I love roses but they scare me. I'd hate to murder something so lovely with my neglect.