“You need to get up and get going”
“Going where?”
She jammed her hands on her hips. “Doing whatever private
investigators do. You told Tatum you’d start today.”
{chapter break}
Well, that would certainly teach me to never down another bottle of Jim Beam.
Lynn Chandler Willis
Wink Of An Eye (Page 52-53) 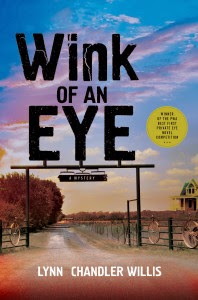 Lynn Chandler Willis’s books cover an array of mystery subgenres. But it doesn’t matter what subgenre she’s writing, her work wins awards. Her first book, Unholy Covenant, was true crime, based on a North Carolina murder. Published in 2000 by Atticus Books, St. Martins re-released it using the new title, The Preacher’s Son. Her faith-based mystery, The Rising, won a 2013 Grace Award. That same year, Lynn’s first PI manuscript, Wink Of An Eye, won the PWA First Private Eye Novel Award. Few women have won the award, and Lynn was the first woman to win in over ten years. Minotaur released the book this past November. You can read more about Lynn at her website.
Reading The Rising and Wink Of An Eye were pleasures. Please welcome Lynn to WWK.                                E. B. Davis

What were you doing from 2000-2013? Perfecting craft, squirreling away plots, creating characters, storing up energy, and waiting for just the right moment to emerge to win awards?

Something like that! I spent a lot of “writing” time publishing a bi-weekly small town newspaper called The Pleasant Garden Post. I was the chief reporter, editor, graphic designer, and ad salesperson so there wasn't a lot of creativity left at the end of the day. It was very difficult to work in both fiction and non-fiction worlds. The words “apparently” and “according to” kept finding their way into my fiction!

Before the contest manuscript, had you ever toyed with writing a PI novel?

I've always had an interest in the “art of detecting” whether it was with a detective in a police department, a government agency or the lone guy working by himself. When I came up with the character of Gypsy Moran, I knew I didn't want him to be confined, so to say, by department policies and procedures. I felt being able to work independent of a formal agency or department setting would be more in line with his character.

How much did the editors at St. Martin’s Minotaur markup your manuscript between the contest and publication?

To my surprise, not very much! I was actually quite pleased and beyond humbled that there 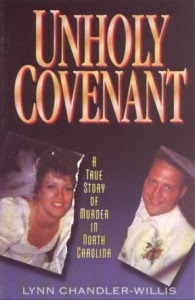 wasn't that much that needed changing. There was only one scene that my editor had a slight concern over and I was more than fine with changing it.

Please give our readers a short synopsis of Wink Of An Eye.

Twelve-year old Tatum McCallen hires reluctant PI Gypsy Moran to prove his father didn't kill himself. Gypsy, on the run from his own set of problems, soon finds himself in the middle of a case involving eight missing girls, a cowardly sheriff, and undocumented workers. Aided by a sexy reporter, Gypsy begins unraveling secrets buried deep in his tiny hometown of Wink, Texas. Secrets so deep, exposing them threatens the only woman he's ever loved, and the very life of Tatum.

Gypsy Moran, your main character, reminds me of Susan Rogers Cooper’s Milt Kovak in personality, always ending up in the most awkward situations—some—self made. Are you a Milt fan? How did you dream up Gypsy?

I'm a sucker for a bad boy, especially the ones with big hearts and a touch of vulnerability. Gypsy gets into some of the situations he does because, although he'd never admit it, he is at his core a good guy. He's jaded, but wants to see the good in people. He's a guy's guy yet will be the first to “scream like a girl” when he's in pain. When I developed his character, I wanted him to be an average guy—someone most guys could relate to. He's not strapping tall nor does he have bulging biceps. He can throw a punch, but feels the pain when he takes one, too.

Milt returns to his hometown of Wink, Texas on the run from Vegas. Why did he run from Wink twenty years ago to Vegas?

A need to see what else was out there, and a lack of jobs other than in the oil fields or ranching.

Wink and Kermit, TX—you can’t make it up. Are these real towns outside of Odessa? Why set your novel in Texas when you live in North Carolina?

Yes, Wink and Kermit Texas do exist. Kermit is the county seat of Winkler County. They're about 40 miles west of Odessa. When I was developing the story, I knew I wanted it to be set in the southwest, I just wasn't sure exactly where. Then I saw the movie “No Country for Old Men” and fell absolutely in love with the setting. The bareness of west Texas really spoke to me and I knew I couldn't put Gypsy anywhere else. The loneliness, oppressive heat, and nothingness of that area fueled Gypsy's restless nature. I started researching small towns in west Texas and when I found Wink, I knew Gypsy had found a home.

Gypsy has a knack for choosing conflicted women. Is it a reflection of himself? Or does he have an obsession for trouble as the rest of his family contend? 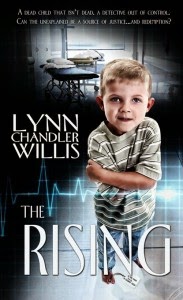 I think in some small manner, Gypsy is ruled by passion more than he would ever like to admit to. Not just the sexual, heated passion but a real passion for just the art of living. And usually with great passion comes great conflict so he learns early on he has to take the good with the bad.

Rodney surprised me. From how Gypsy’s sister, Rhonda, described him, I thought he would be a wimp. Is that her perception of him, or does working with Gypsy give him more confidence than he normally possesses?

I don't see Rodney as a wimp but rather someone who doesn't enjoy conflict. In one section Gypsy describes Rodney as being “safe” and says Rhonda had “settled for safe.” Rodney is former military who went on to become a cop so he bleeds red, white and blue. But, like Gypsy, it was important to me for the characters to be real so Rodney wasn't in special forces or the chief homicide detective in his police department. He was a good soldier when he served and he's a cop who writes more traffic tickets than investigating crime scenes.

You write men very well. How did you develop that ability? What advice can you give other female writers?

I have an adult son and a son-in-law and listen to them when they think I'm not. I worried about if the voice was right, if it was too much and needed to be reigned in, but I had a few male beta readers that said I “nailed” it so I relaxed a little. I think what makes Gypsy different than other male characters written by females is that Wink of an Eye is written in first-person so every thought, every sentence, had to be from Gypsy's point of view. In one scene, for instance, he's walking behind sexy reporter Sophia Ortez and what's the average, 38 year-old red-blooded guy going to notice? He wasn't looking at her shoes. My advice to other women writers trying to capture the male voice is to listen and watch. You have to think of it like writing any other character—if you're writing from an elderly point of view, you need to observe the elderly. The same with a child or a teenager, or someone from a big city as opposed to someone from a rural setting. You have to be able to see things through their eyes.

In The Rising, a boy pronounced dead rises without a scratch after main character, Ellie Saunders, a police detective, saw his battered body in an alley. Is Lazarus Syndrome real?

Yes, the Lazarus Syndrome is a real medical phenomenon. There are many documented cases of people being pronounced dead but coming back to life. When writing The Rising, I needed a scientific explanation to balance the miracle aspect and discovered the Lazarus Syndrome.

Ellie’s lack of understanding about her own history surprised me. Why didn’t she ask questions at the time? 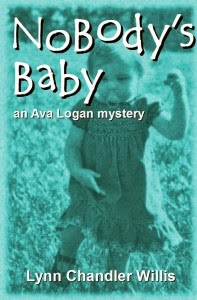 That I think goes back to a very strict religious upbringing where questioning “why” is frowned upon. In a lot of situations, one is just supposed to accept things as they are and not question why, as doing so is questioning God. It's not until Ellie's older and learning to think for herself that she does begin to question why things happened the way they did.

I thought the next book would be the second in your Gypsy series, but it’s not. What is the plot of NoBody’s Baby?

I was already deeply involved with NoBody's Baby when Wink of an Eye was picked up, so there was a real drive to finish it. NoBody's Baby is set in a small town in the North Carolina mountains where widowed single-mom Ava Logan is the owner/publisher of the local newspaper. After babysitting a friend's toddler, Ava takes the baby home and finds her friend has been brutally murdered. A past romantic relationship with the local sheriff complicates the situation as Ava goes from being the local media to a murder witness, and then a target herself. Complicating her life even more, Ava takes in the toddler to avoid the baby going into the foster system.

Will there be another Gypsy book? Will we find out Gypsy’s real name? Will we discover why Gypsy’s father left? What happened between Gypsy’s mother and that awful Mr. Kinley?

I'm working on Wink II now so hopefully St. Martin's/Minotaur will pick it up as a series. There has been a lot of interest from readers in more “Gypsy” adventures so fingers crossed! Book two does reveal how Gypsy got his name and also delves more deeply into Gypsy's “daddy” issues, which are in fact connected to the evil Mr. Kinley. 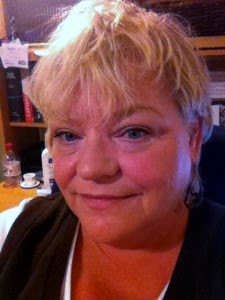 If you enjoyed hearing about Lynn’s books and are interested in learning more about Lynn as a person, hop over to my blog for yesterday where she answers 10 questions. Here's a direct link to her guest blog. [NOTE: the link will take you away from this page, so read the other comments before clicking it -- Blogger doesn't let the link go to a new tab :( ]

What interesting characters. New additions for my "to be read" pile of books.


Good interview. I keep a little notebook beside my computer to write down the books I want to order and read. Lynn, I wrote your name and books in it.

Thank you Warren and Gloria! I do hope you enjoy them. Gypsy is such a fun character to write :) and Jim - thank you so much for having me as your guest earlier!

Lynn, you have been on my want-to-read list for a while. I'm hoping I can talk you into making the trip to Greenville and being a guest at our SinC meeting. All your books sound intriguing.

By the way, another great interview by E.B. Davis. She always knows her subject and her subject's books. Double cheers.

Thanks Polly. I've still got Greenville in the back of my mind :)

Lynn, reading your books was a pleasure. Congratulations on winning the contest. Please announce on the Guppy email list when your next book is released. I'm now a fan!

Great interview! Thanks for sharing with us. Your characters sound fascinating.

Thanks everyone for the kind comments. I'll shout it to the world when Gypsy's next adventure is finished. And a big thanks to WWK for having me. I enjoyed the interview so much!