Some Thoughts on Voice in Fiction 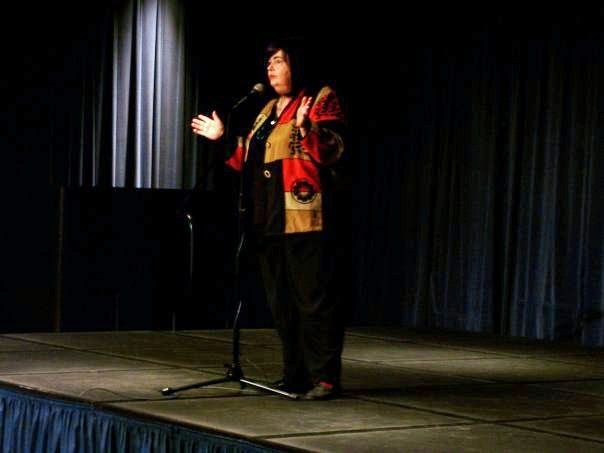 As you read this, I’m driving home from two conferences in Alabama—Murder in the Magic City and Murder on the Menu. I’m writing this post before I leave for them, for obvious reasons. While I’m getting ready to leave, I’m also thinking about one of the panels I’ll be on, “Murder: How Do You Give It Voice,” and about the whole problem of voice in fiction.


I often find confusion surrounding the issue of voice in fiction. It may be mixed up with point of view and with the voice of one or more characters. Narrative voice in fiction is what allows us to identify a writer’s work, even if one book or part of a book is told in one character’s first-person viewpoint and another book or part is told in a different character’s first-person viewpoint. The two character voices will be different from each other, but the writer’s voice will be apparent throughout.  The writer’s voice, the narrative voice, is comprised of the author’s values, control over the material, narrative structure and strategies, attitude toward characters, tone, and the distinctive way the author employs language. This last item is also called style, and I place it last because I’ve seen so many new authors struggle to “develop a style.” The truth about style is that it’s usually and at best unconscious, a result of all those other choices a writer makes.


I’ve written fiction in first-person and in third-person viewpoints. My first-person viewpoint characters have ranged from a child in a troubled family to an elderly middle-class African American man who loves to garden to a young hillbilly seamstress who’s a battered wife during World War II to the strong female Cherokee campus police chief protagonist, Skeet Bannion, in my mystery series. Each of these characters has had a different voice, a different way of seeing, talking to others, and telling the story, but any perceptive person reading them all would realize they were written by the same person.


A writer’s narrative voice involves her obsessions, the topics of interest that she returns to again and again to explore. A writer’s voice involves where he stands on various issues, even if his characters disagree. If a writer is innovative and reckless or careful and controlled with the material she’s working with and the narrative strategies she chooses to employ, her voice will vary accordingly. A writer’s tone and attitude to his characters play heavily into the way in which he manipulates the language he uses and heavily influence his voice.


I know of writers who decide to imitate the work of authors they admire, trying to attain their style, but style is as individual as a fingerprint, and all they end up doing is failing at being the admired author while they also fail at being the writer only they could be. A failure on both counts and doubly sad.


The best way to develop your own unique voice, the one only you can offer the world, is to read a lot and write a lot, always trying to get better at the craft of writing, learning new techniques and trying them out to see if they are a fit for you or not. The more you write, actively trying to improve at the craft all the time, the more you will find yourself settling into your own way of doing things and thus developing your own individual voice, that one thing that, in the final analysis, is all we writers really have to give to the world, our own unique vision.


Are there writers whose narrative voices you really admire and enjoy even as their character voices are different? I think of Margaret Maron, whose Sigrid Harald books are so different from her Deborah Knott books, and yet I think no one could ever think anyone but Margaret Maron had written either of those series of books.
Posted by Linda Rodriguez at 12:30 AM

I hope you had a great time in Birmingham and Wetumpka; I sure did last year.

I remember submitting a short story to an anthology and getting a comment back from one of the judges, who had received the material with the author information stripped. About ½ of the way through he had a footnote to the effect that “This is Jim Jackson’s story; I’d recognize his style anywhere.” That was when I realized I had developed my voice, for better or worse.

My favorite voice is actually an Alabamian, Robert McCammon. As weird as it sounds, I could just crawl into his literary voice and curl up, it's just so comfortable and perfect.

Excellent depiction of voice. It is the one thing that follows us, and gives us away, no matter what we write. A literary fingerprint, if you will. I have two series characters, Catherine Swope and Hayden Kent. Each has a different character voice, but the overall tone of the books can be identified as my voice.

When I was in college as a late non-traditional student taking many extra literature and writing classes, I had more than one professor say I had Dorothy Day's voice. It was years later when I picked up a book by her and read some of her essays. I don't know if I still have elements of her style in my writing mysteries, or not.

One of the things we as writers have to watch out for, I think, is that some of those who edit our work aren't so much editing for errors, but in someway trying to change our voice to mimic there's.

I've seen a lot of mystery writers trying to copy Janet Evanovich's style of writing and most of them don't succeed, in my opinion, even though they manage to get published, it still doesn't resonate with me.

Great essay! I'm thinking of PD James, whose narrative style and voice ring true through not only the Dalgliesh books, but her two Cordelia Gray books, her dystopian novel, and finally, her Pemberley novel. Unmistakable and not to be imitated, but I've always admired her giving the setting of her books the role of a major character.

Hope you had fun, Linda! Love the photo of you speaking with your audience.
Elizabeth Peters came to mind when you started talking about voice. I think I would have read laundry or grocery lists if she'd written them.

The voices I enjoy that come to mind are, interestingly, both British. One is Edith Pargeter (I love the Cadfael series, which she wrote as Ellis Peters)and the other is Margaret Yorke.

Jim, I'm curious--was the story where the judge recognized your writing accepted for that anthology?

It was nice to see you and Ben.

Robert Parker struck me. I just finished Margaret Maron's new book, up for an Agatha. You're right. Her voice is wonderful. There's a new writer who I'm interviewing, Amy Metz, whose voice is vocal. I hope to evoke her voice during the interview. You'll see what I mean. The South. You gotta love it.

I'm understanding voice (author and character), but what about style, Linda?

I'm late to respond to comments because some of the momentary wifi I had counted on (at a hotel) was down when I tried to use it--and the trip took a whole lot more out of me than I expected.

Jim, Shari, and Warren, yes, I had a marvelous time, and it was fabulous to get together with some of our own WWK bloggers, Warren, Sam, and Paula.

I love the examples you're giving of voice, Sarah, Kait, Margaret, Gloria, and KM. Shari, have you read Elizabeth Peters' wonderful book on writing, WRITE AWAY? Nonfiction and how-to but you'd recognize her voice as the same in the novels.

Elaine, style--unless you're going for what I think of as bad literary fiction (and contrary to what they'd like us to believe when they're putting down genre, there's plenty of that to be found)--is an intrinsic part of and one of the major building blocks of voice. If you're trying consciously for a "distinctive" literary style, you're probably writing bad lit fiction. Style involves your language, diction (word choice), idioms and syntax, whether you favor concision or loquaciousness (which is not always a bad thing, but it's tough to do well). All of those decisions involving which words you will use in which order create style, and they should be coming out of character and narrative voice and not be consciously overlaid. Gloria gives a good example of the problems of that last with all the imitators of Janet Evanovich. With Evanovich, it's voice and distinctive and original. With the imitators, it's a contrived "style" and never convinces us completely.