Kindle Scout and Me

Have you heard about the relatively new Kindle Scout program? If not, I’ll tell you about it in a minute. If so, I’ll tell you why I chose to try it.

But first, here’s how I came to my decision to try to qualify for this Amazon publishing venture and here is the link where you can nominate my book, Ant Farm.

The situation before Kindle Scout

The Seamus McCree series is published by Barking Rain Press (BRP), a small publisher. The books have generated positive reader reviews. The few professional reviews they have received have also been positive. But BRP does not have the resources for any kind of major publicity campaign. While I have done what I can to promote the books, one aspect I have not had any control over (nor would I in a traditional publishing contract) is the ability to aggressively price books to generate a larger reader base.

I have confidence that if I can get people to read a book in the series, they will want to read more about Seamus and friends and the scrapes they get into. If I were persistent and produced a book a year, by the time I had five or seven books in the series, I would have built a bigger following and the series might have traction. Was there a better way?

My electronic equivalent of the bottom drawer contained the first novel I wrote with Seamus McCree. I referred to it as my practice novel because, through its dozen drafts I learned how to write a mystery. It was good enough to garner an agent offer, but not strong enough to be published, and so six years ago, I put it aside. Last fall I reread it. Ant Farm had good bones, but needed major work to bring it up to my current standards. With effort, I could make it an excellent read.

If I self-published that reworked story, I could use it as a marketing device to help bring readers into the series. It could be a loss leader for the series. I could hook readers with Ant Farm and continue to provide good stories with Bad Policy, Cabin Fever, and Doubtful Relations (the manuscript I put aside to rework Ant Farm). Done correctly, I could build the Seamus McCree “franchise” more quickly.

After hemming and hawing at this change in plans from finishing Doubtful Relations first, I decided to tackle Ant Farm. I rewrote, re-edited, sent to beta readers, re-edited, proofread, and now it’s ready to go.

While I was revising, Amazon announced the Kindle Scout program. Briefly, it is a way for Amazon to get great content for their Kindle ebooks and Audible audio books based on reader nominations. An author submits a complete book in one of three genres, Mystery/Suspense/Thriller, Romance or Science Fiction/Fantasy. Amazon staff reviews the submission, which includes a book cover, logline, blurb, author bio and some optional questions the author can answer. If they appear reasonable, within a couple of business days the book is listed and available for nomination. My direct link is https://kindlescout.amazon.com/p/3IATL9SA04ZS2

Submitting to the Kindle Scout program cost me no money and only a bit of time to jump through their hoops.

Unlike traditional publishing where the publisher produces the book cover, for Scout I had to submit one. Since I had planned to self-publish anyway, I already had a cover prepared. However, I had to develop a logline with a maximum of 45 characters, a short blurb (max 500 characters), cram my author bio into another 500-character limit, and choose three questions to answer, each in 300 characters.

I can use the logline for promotion, and the other stuff didn’t take too much time, and I had no extra cost, so the process was not much of a burden.

Recall that one of my reasons for independently publishing Ant Farm was to maintain pricing control so I could generate free and reduced price opportunities to introduce people to the Seamus McCree series. Amazon, as the publisher, controls all pricing decisions. They will decide if the book is $2.99 or $5.99 or whatever. They’ll decide whether to provide free days.

If selected, Amazon determines when the ebook version of Ant Farm will be published. If I am not selected, I could have had the ebook available a month earlier. That possibly cost a bit of revenue, but not much.

If accepted, my ebook will be available only in the Kindle format sold by Amazon or loaned through their Prime and Kindle Unlimited programs. No Barnes & Noble, no Kobo, no Scribd or Oyster. Amazon generates about 75% of my ebook sales. That means hooking my wagon to their horse gives up 25% of that potential revenue if all things are equal.

But will they be equal? I don’t think so, which brings us to the advantages as I see them. 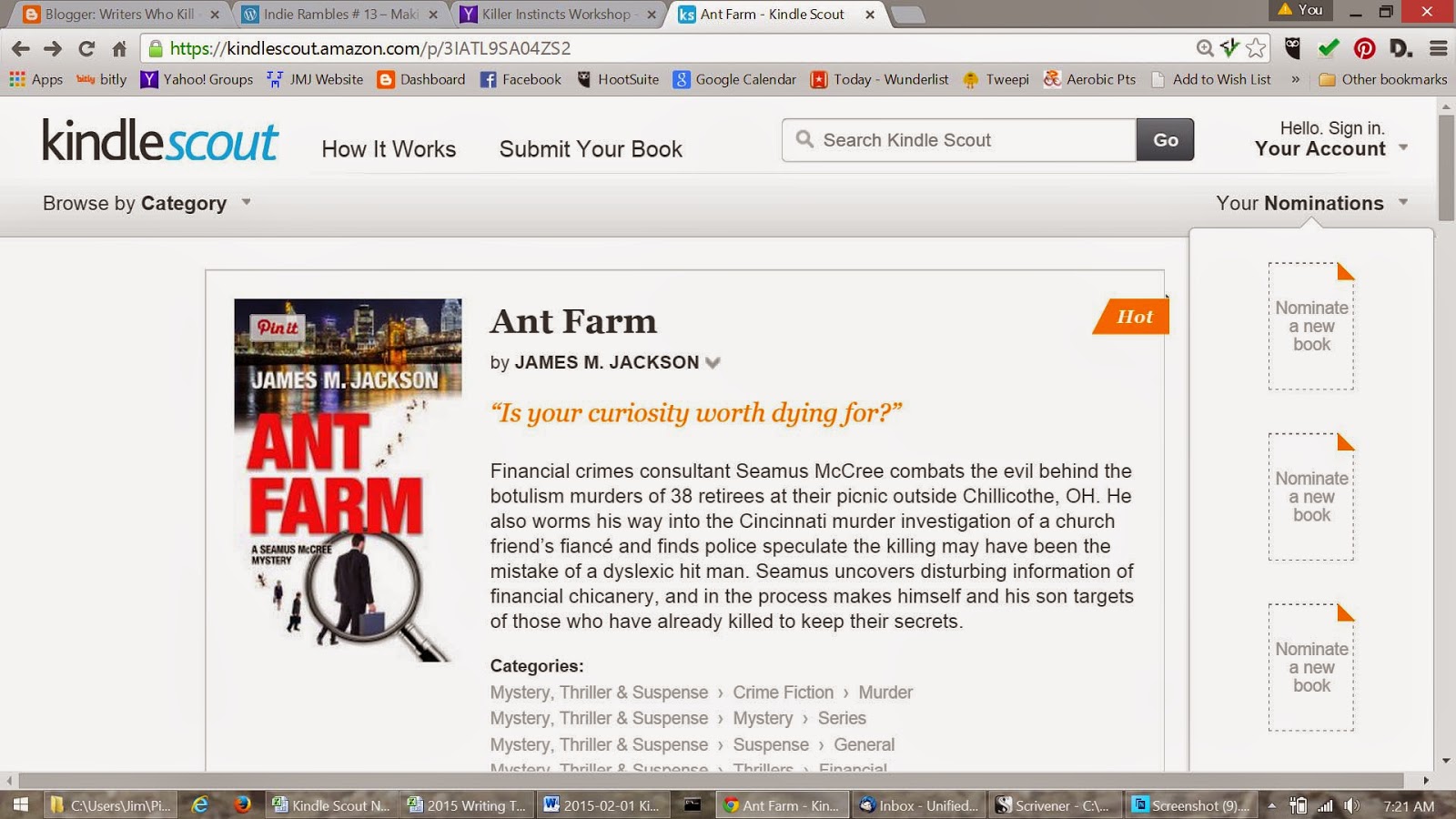 The primary reason I wanted to independently publish Ant Farm was to generate more readers for the Seamus McCree series. I believe (no facts on which to judge as the program is too new) that Amazon will want the early books to succeed. As of this writing, the Kindle Scout program has selected eight books in November, eight in December, and so far only one in January.

If they select my book, it will be one of the first published, and I believe they will make sure those books will do well. They will promote the heck out of them, and they can do that much better than I, because they have the platform for it.

The Kindle Scout program pays a $1,500 advance for books they publish. That advance would cover the editing and book cover costs I’ve incurred. Whatever royalties I earn would be profit.

Participating in the Kindle Scout program provides 30 days of free publicity for Ant Farm and by extension the entire series. Even if not selected, at the end of the 30-day period those people who nominate the book receive an email from me thanking them for their interest and inviting them to keep in touch with an email address and link to my website.

Plus, during the nomination process I will use social media to generate interest in Ant Farm’s participation in the program. If others retweet and share Facebook posts, it provides additional content for new people to learn of the series.

As the saying goes, “There is no such thing as bad publicity.”

The initial contract with Kindle Scout is five years. However, if the ebook does not meet defined monetary goals, an author can cancel the contract in as few as two years. My contracts with Barking Rain Press have a three-year lock in. In reading Kindle Scout’s contract, it’s clear they intend the authors to be successful and if not, let them out of the program. So, if it is a bust, I can exit after two years, self-publish on all the platforms, and move on.

It comes down to giving up total control and ebook retailers to gain Amazon’s marketing power. Given my current level of sales, I think it provides a good risk/return tradeoff. Others may be in different places in their writing careers and could come to a different conclusion for them.
In case I haven’t been obvious. If you haven’t nominated Ant Farm yet, I hope you will. If you have, then thank you very much. I am offering extra praise for those who help publicize Ant Farm’s quest by letting others know.

It’s a good book, although I am a bit prejudiced.

You've got my nomination, Jim! Best of luck with your campaign! (I'm biased, but I have nothing but good things to say about the Kindle Scout program.)

Thanks for the explanation. Good luck with your book.

I know most readers and writers hate Amazon for their almost monopoly, but once you get past that, for writers, it is the best market. Good luck with getting into the program.

Even with its flaws, I love my Kindle. I'm one reader who won't go back to paper. I read too much to house the physical books, the cost is cheaper, and some books will never show up in the library--and I read a lot of those books. Besides, I can adjust the font, lighting, and it's not as difficult to hold. It saves trees, and I don't have to find a bookstore to buy books, wasting time and gas, etc.

Keep us updated on your progress, Jim. Getting Amazon promotion is the best part of the program.

Thanks, Jim, for distilling this for those of us whose minds just go bonkers when we try to figure out what is going on with Amazon's changes.

I don't think I would be able to take advantage of this (still have trouble doing even the most basic things on Amazon's author page. When I can figure out how to access it.) but your explanations help quite a bit.

Alan -- thanks for the good wishes and the nomination. I know your bias and am looking forward to reading the whole of your book soon.

KM -- Submitting to Kindle Scout does not require much technical expertise (no more than cutting and pasting into their online form.)

Thank you for the thorough analysis, Jim. Best of luck with Kindle Scout and Ant Farm.

I have one book in progress, and I'm considering Scout. Right now, I have some fixing to do before I can consider this a finished book. I've been interested in your journey, Jim. I voted for you.

Kara - thanks for the good wishes.

Polly -- I'll let you know what happens. I can already say that the exposure from the Kindle Scout program has resulted in sales of the other books in the series -- so the promotion part is already having a bit of an effect.


Jim, thanks for the input on Kindle Scout. I'm still not sure if I want to go that route, though I just nominated you. And got a message saying something like Radical to show that it went through.

Good luck with it. If it works well for you, I may go that route with my next book.

Gloria -- Thanks for the nomination.

Yeah about that radical. When I first saw that I thought, "Hey, Dude, like what does that mean?" :)

Nominated! Your book had a tag that said "Hot" which I hope means you're getting a lot of votes.
Thanks for sharing your thought process and experience. It will be interesting to see your journey - you analyze so thoughtfully I think we'll get the real scoop instead of just hype. Good luck!

I hope this works for you. I sent in a nomination and am crossing my fingers. I, too have a small publisher, and I know exactly what you're saying about the marketing.

Susan -- thanks for the nomination. The conundrum of publishing does not become any easier as choices multiply.

My philosophy is to take my best shot, work with that and keep moving forward.

Thanks for the rundown. I'll be watching this space to see what happens. Best of luck to Ant Farm!