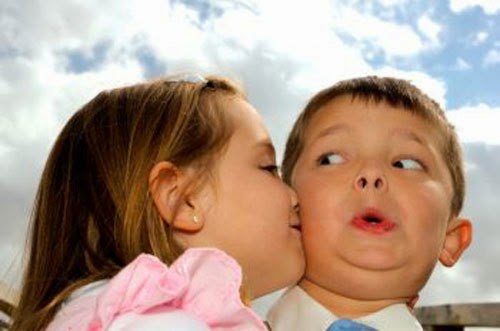 Do you remember when you were a kid and your best friend dared you to kiss a lizard, a frozen light pole, or a boy named Johnny? With your honor on the line you stupidly agreed…and it didn't turn out well. Johnny ran away screaming about girl cooties then gave the other boys on the playground cootie shots. The lizard ran up your arm and got caught in your frizzy hair. Your lips stuck to the pole and your “friend” laughed and snapped a photo.


But can a dare be useful? I never thought so, but I changed my mind after reading that challenges have been the catalyst for an author to break out or begin a career.


Agatha Christie wrote her first book, The Mysterious Affair at Styles, as the result of a challenge from her sister, Madge, who dared her to write a detective story that kept the reader guessing the killer’s identity until the end. Christie accepted the challenge with gusto. Her book featured detective Hercule Poirot who would appear in twenty five more novels. As an aside, Madge also enjoyed making up stories and told tales about a fictional, mentally deranged sister.


William Spaulding, director of Houghton Mifflin’s educational division, dared him to “write a story that first-graders can’t put down.” He wanted it to contain only 225 words selected from a first grader’s vocabulary list.


Ultimately, Dr. Seuss used 236 unique words and it took him nine months to write what became The Cat in the Hat. The story was supposed to be about a king and queen cat but “queen” wasn’t on the acceptable word list. “Hat” was, and it rhymed with cat, so he made a story out of it.


Another challenge was issued by his editor, Bennett Cerf. He bet one dollar per word that Dr. Seuss couldn’t write a book using fifty unique words or fewer. Green Eggs and Ham resulted from that wager. According to some sources Seuss won the bet, but Cerf never paid up. Since the book was a best-seller he probably didn’t need the $50.


When Stephen King first began writing, his short stories were published in risqué centerfold magazines such as Cavalier. This earned him a reputation as a writer just for men and criticism from readers. “You write all those macho things,” one said. “But you can’t write about women. You’re scared of women.”


King took it as a challenge and Carrie was born.


Why were these dares successful? I’m not entirely sure, but they have a few things in common:

-          The author was held accountable for the end product and might have been ridiculed if it was bad.

-          The dare encompassed specific parameters or goals for what would be considered successful.

-          Each author had a problem to solve. My guess is the subconscious mind was constantly working to find a solution.

-          It wasn’t a competition. The writer didn’t compare her/himself with anyone else.


So, I double dare you to write one sentence of that scene, book, or short story that you have been procrastinating because it’s scary or overwhelming. Even though I can’t pay you, success is its own reward.


Has someone ever dared you to do something?
Posted by Kara Cerise at 12:00 AM

What great stories. I am working on a rewrite of Doubtful Relations, the fourth Seamus McCree mystery and am daring myself to take risks to make it stronger. We’ll see how I do.

Many of my best stories come after I challenge myself to attempt something I have not done before. Writing is always risky.

There's a saying, "No guts, no glory." Jim, I bet Doubtful Relations will reflect your risk-taking. I look forward to reading your book.

Warren, I like how you challenge yourself to try something you've never done. I think beginning a new story is always a risky journey into the unknown.

Fascinating, Kara! I'm writing an ambitious, risky novel right now. I've told my agent that, if I can't pull it off, I'll just write another novel--I have more ideas for books than I'll have years left to write them. If I don't take this risk, though, my writing will suffer. So keep your fingers crossed for me to be able to meet the challenge I've set myself.

So good to hear about people taking risks with their writing. I don't think I'm to that point yet.

My first impulse was to respond with the story about when we were kids. One type of bushes grew small red berries. We called them "poison berries" for no reason anyone could remember. One day we decided to see if they were, in fact, poison, and dared my brother Tommy to eat some. He was just a little kid, and pleased with the attention of the older kids, he ate some. Then we all sat around waiting to see if he'd die. I'm happy to report that he didn't. Not even an upset tummy.

Good blog, Kara. I don't remember any dares as a kid, but I do know I was a champion tree climber so maybe it was because my younger brother dared me.

I've taken risks in my life not so much on a dare as because I wanted to attain something, like deciding to go to college for the first time in my early forties to become a teacher. Was it scary? Yes because it had been 25 years since I'd graduated from high school.

Another time I talked my friend into taking clogging lessons with me just because I thought it looked like fun. We had no idea that we would be forced to perform on stage.

Although my younger sister didn't dare me, she did suggest we take up backpacking after reading Bill Bryson's "A Walk in the Woods." I was 60 years old at the time, but I agreed to it and kept it up for another nine years, I only stopped because she couldn't do it any longer.

As for writing, it was a bit of a risk to decide to go Indie and not count on an agent and/or a publisher to take care of all the details. It was a risk to head to a Malice Domestic Conference without ever having gone to any conference or knowing anyone who would be there, too.

Linda, I'm intrigued about the novel you're writing and hope that you will be able to tell us about it one day. I'll keep my fingers and toes crossed for you!

KM, I'm glad your brother didn't get sick from eating the berries. I wonder what they were. When I was child a friend and I challenged each other to eat mud pies made from real dirt. I don't know why in the world we did that, but we're still alive.

I'm impressed you went back to school when you were in your forties, Gloria. Also impressive are your backpacking and writing challenges. You get "gut points" (my high school teacher used that term) for being scared but doing things anyway. I think that's the definition of bravery.

I laughed about clogging lessons and being made to perform. Sometimes things backfire.

Great post - I had to laugh at the Stephen King one though. Did you know he wrote for the True Confession magazines in his earlier days. He wrote and published in them, his wife (who is a fine writer in her own right) couldn't get past the editors. Now that's a go figure. Dares, you don't want to know. Lets just say I know that you can get out a second story window by tying sheets together. Thanks for a thought provoking and dynamic blog.

Kait, what an interesting story. I wonder why Stephen and Tabitha King haven't co-authored a book.

You piqued my curiosity about a dare to tie sheets together and exit a second story window. Hmmm

I loved these stories, Kara! I love thinking about Agatha Christie's sister daring her to write the story - she must have had a sense that her sister could do it. That sense of challenge is quite a motivator. Like Gloria I went back for a masters in my 40s and like Kait, I've climbed into and out of some places I shouldn't have been! A good "what the heck" keeps things interesting.

Shari, my guess is that Agatha Christie was motivated to write a top-notch story since her mother had been encouraging her to write. Nothing like a little pressure to light a fire.

How wonderful that you went back for your masters in your forties. That's a challenge!