Maira Kalman's Looking at Lincoln - Portrait of a Favorite President 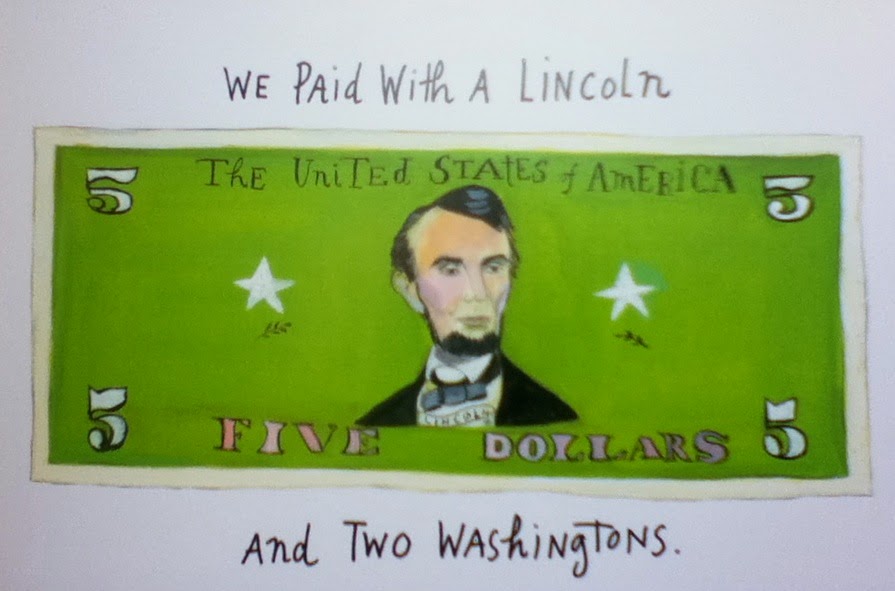 It’s Presidents Day! Or maybe not where you live. February 16 is an official federal holiday – George Washington’s Birthday. States are not required to adopt federal holidays, however, and in many places the presidents with February birthdays, Washington and Abraham Lincoln, are forced to share a celebratory day, the mashed up Presidents Day. One wonders what these two men, the gentleman farmer and the country lawyer, would have made of this forced sharing. One thinks of kids unlucky enough to have a birthday on Christmas. There just doesn’t seem to be enough attention to go around. Somebody’s short-changed. 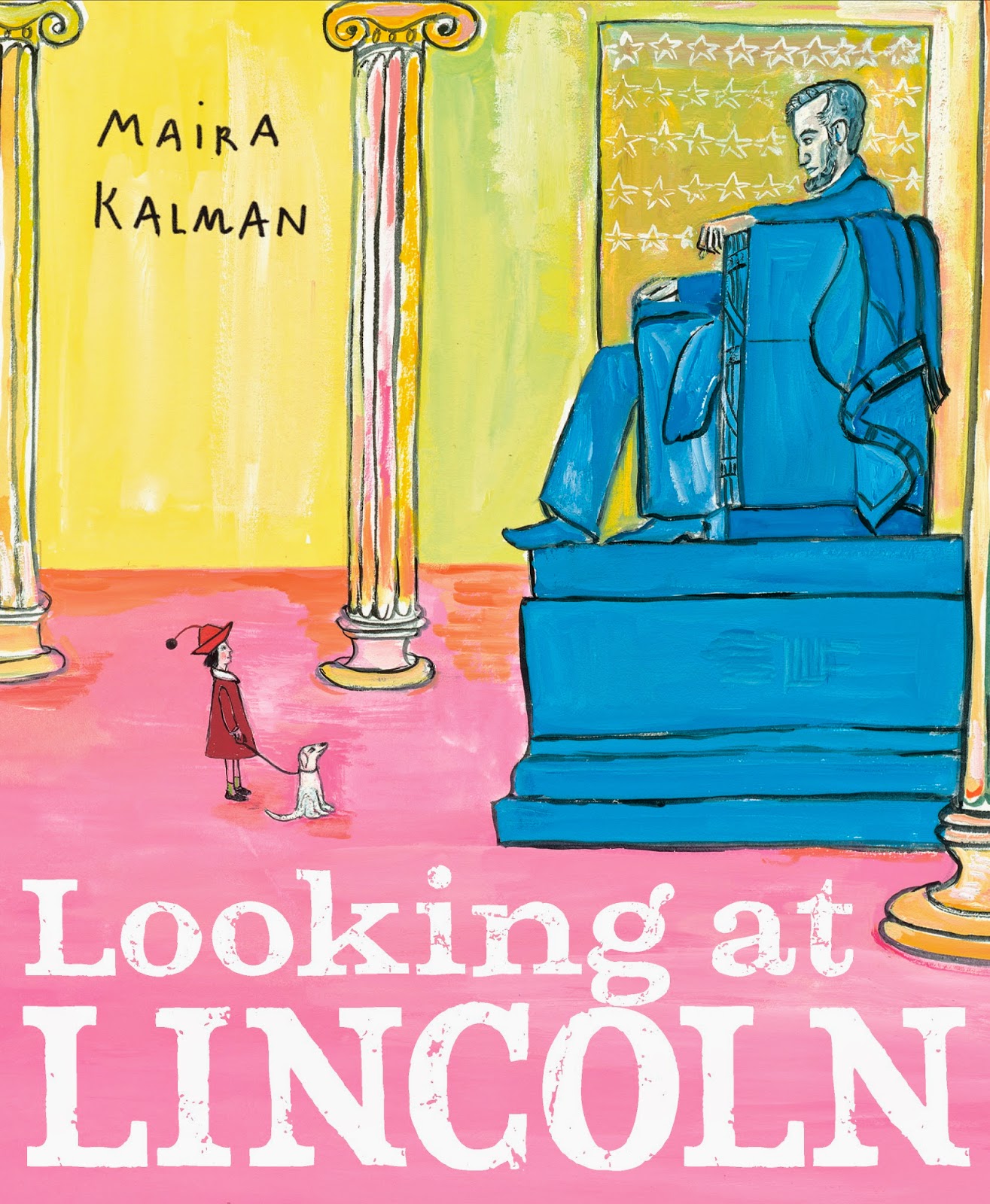 As we do on most American holidays, we’ll shop sales or go to the movies, or just work as usual. But if you’d like to do something president-related I hope you’ll consider spending a few moments sharing a very special book with a child. Many books about historical figures claim to “bring history to life.” Maira Kalman’s Looking At Lincoln conjures Lincoln, with all his complexities, joys and sadnesses, in a children’s book that transcends category.

Something interesting happens when you ask a poet or artist to do a historian’s work. Kalman, an artist, writer, and designer whose work appears in The New Yorker, approaches Lincoln with an artist’s eye. She admits up front that when she started to research, she fell in love with Abraham Lincoln. Not a confession you’ll hear most professors or historians make, and I wondered if the book was going to get a little weird, but no worries. One cannot help but agree with Kalman’s taste. Lincoln was a fascinating man.

What does this book offer writers? Kalman shows us the details that, like brush stroke after brush stroke on canvas, build the most colorful and intriguing portrait. Unlike a historian, she conjectures with a child’s curiosity, which draws you into the text. You can’t help but feel that you know Lincoln better, know the real Lincoln, after spending time with this book. 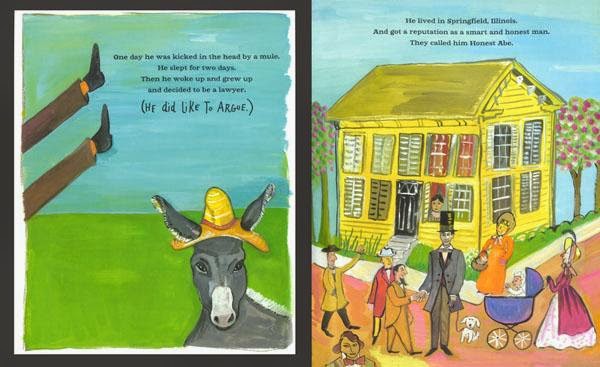 We all know the Lincoln of history books: born in a log cabin, became a lawyer, wrote the Emancipation Proclamation, preserved the Union. The great orator. Honest Abe.

In this book, we see the homely details that a child would want to know – and if we’re honest, the kinds of details that we all want to know. Kalman tells us Lincoln always had an apple on the table where he worked. Was kicked in the head by a mule and was unconscious for two days. Loved the vanilla cake that his wife made. Enjoyed Mozart, especially The Magic Flute. Stuffed notes into his hat so he wouldn’t forget things. Loved his dog, Fido. Fido had crossed eyes.

So, Writers Who Kill, who was your favorite president?
What details define your character?

There are too many who are fascinating to say which is a favorite. Easier to say which ones I care very little about.

The oldest is Martin Van Buren, and I have to say I am less interested in the ones I lived through, so that excludes Truman through Obama.

A few years ago, I finally toured Mount Vernon. Washington had so many trials to overcome. I had had no idea of his business failures, his experiments in commerce, his health problems, or of his remarkable wife.

I can't say who my favorite president is, but my favorite historical figure is Ben Franklin. He seemed to know how to live life to its fullest. That's an art.

I'd have to go with Lincoln. I live in the Gettysburg area, so almost by osmosis, I know a lot about him (teaching American history to inner city special ed kids for a few years doesn't hurt, either. Or does being married to someone who teaches American political science in a community college and sometimes tries out his class preps on me.)

Lincoln was a class act.


It's Abraham Lincoln. I've read at least three biographies of him and each one only increases my admiration from him. I like his lack of pretension, his humor and how he managed to get people to work together if not always, certainly better than most presidents. Also, he was always a caring husband and father.

This past Saturday a woman portrayed Mary Todd Lincoln and another woman portrayed her seamstress, who had been a former slave and managed to buy freedom for her and her son. Both were good, but the woman who portrayed the slave was fantastic. Lincoln's wife has not always been treated fairly by both he media of the time or today, unfortunately. I read a biography of her, too, hat treated her better.

I see what you mean, Jim. Living through some of these modern presidencies has proved to be pretty dispiriting.

EB, I'm with you on Ben Franklin. What a bon vivant! We need more of that - though the modern press would have a field day.

KM, I'd like to do more reading on Lincoln so if you or your husband could recommend good books I'd appreciate it.

Gloria, that play sounds great. What was it called? Mary Todd Lincoln has gotten harsh treatment, today and in the past. Her own son committed her to an institution….though goodness knows he had his own trials. The more I learn about what Lincoln went through, the more impressed I am by his inner strength.

Shari, I always love your telling us about new books you share with children. This is one I intend to read. I had the opportunity to shake Gerald Ford's hand, and will never forget how he focused on me for that moment, making me feel like we were the only ones in the room. Since that time, I have read a gret deal about him . A most impressive person.

Sorry. That should have been great!

Sometimes I learn more from children's books than from reading history books for adults.

I feel like I know more about Lincoln's life--his personal and professional trials--than other presidents because so much has been written about him. I'm impressed with his strength of character.

Hi Paula,
How cool that you got to meet a president. Ford always seemed like a real person to me (maybe it was those Chevy Chase impressions?)

Hi Kara,
I think you're right - and the movie Lincoln also has probably introduced him to those who won't find him in books. Loved that movie - Love Daniel Day Lewis!