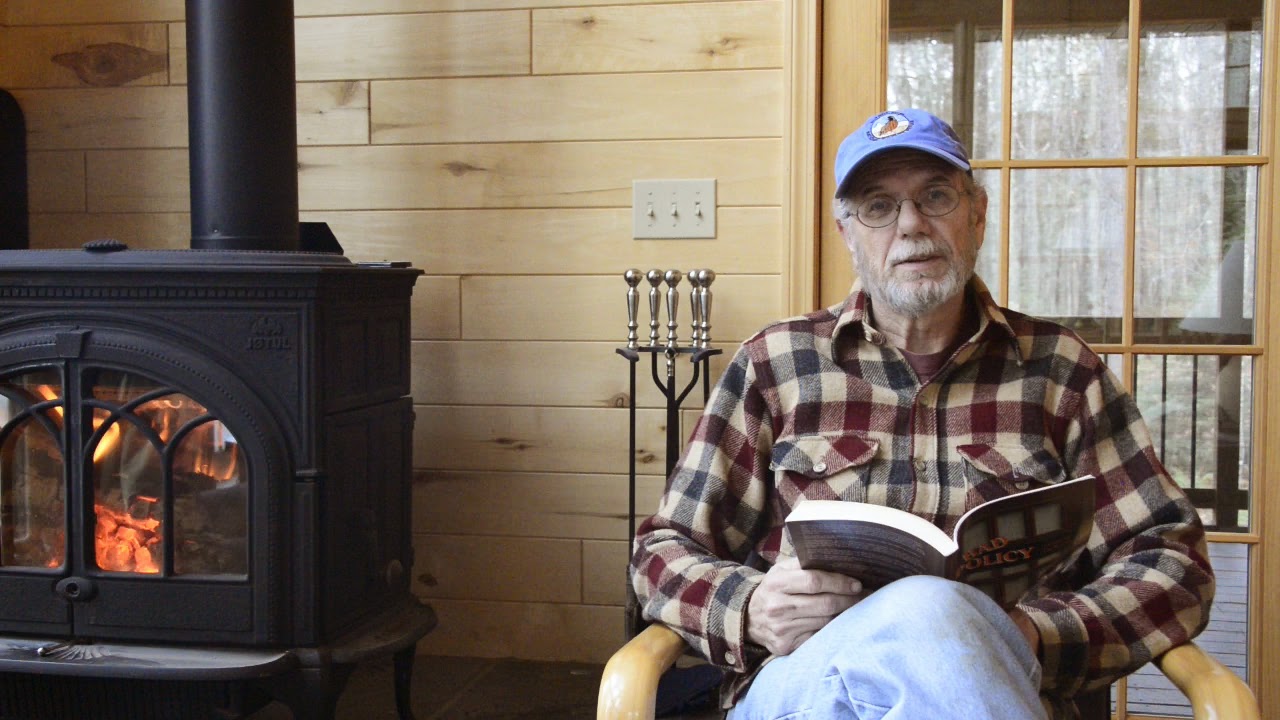 I confess the blog title reeks of hyperbole, but what better way to announce that I am now in the video business? In a day and age where three-year-olds post selfies to Facebook and kindergartners make YouTube videos from their smart phones, I am perhaps a bit behind the curve. I decided to rectify the matter and create YouTube videos of me reading the opening scenes of my Seamus McCree novels.

While my son, Brad, was vacationing at our camp in the U.P. in September, he and I experimented with taking videos using my Nikon camera. Our first attempt used the lake as the background. That produced a fine picture of the lake with trees on the far shore in high color. Unfortunately, I was so underexposed as to look like black death.

We tried the woods, which fixed the exposure issues, but the microphone picked up each leaf as it crashed to the ground. Too distracting.

Next we tried the screened porch of our cabin (backlight problem again). Finally we waited for a day with no wind and recorded a great take of me reading the first chapter of Cabin Fever out in the middle of our woods. By then, Brad had figured out the optimal distance to maximize hearing my voice and minimize background noise; he’d figured out the zoom so I was not too big and not too small. He had it nailed—except the budding videographer neglected to focus the shot. The tree behind me was in exquisite focus; I appeared as if painted by Monet.

I put the project on the back shelf, and we enjoyed the rest of his vacation exploring the woods on our ATVs. In mid-October, Jan was gone for a few days visiting family and I had the camp to myself. What better time to try this again? The opening picture of this blog is a still taken from me reading Bad Policy.

It took a few test shots for me to figure out the framing, focus, etc. I had already decided I would need to edit out errors and had some simple software to accomplish that task. A few hours later, I had two movies—but they were huge space hogs. (The Nikon takes HD video.) YouTube does its own compression, but whenever I tried to load one of the videos, it would almost complete the process and then return an error message.

So, I downloaded free video compression software, squeezed the file to manageable size, and performed the YouTube uploads. Here are the two files if you are interested:

Will having YouTube videos available on my website bring me more readers? Who knows, but they are available if someone happens to stumble across them.

A time/value analysis would undoubtedly indicate I would have been better off spending the time writing the next book. But hey, who said everything in life should be about the most efficient way to use my time? I had fun and who can resist the fire in the background?

Jim, I listened to you read most of the first chapter of Cabin Fever. Nice job! Since I've already read and enjoyed both of your books, I didn't need to hear all of it. I hope you get a lot of hits on your new endeavor.

Thanks Gloria -- it was a fun project to accomplish. ~ Jim

It's neat that you are expanding your expertise.

This sounds like fun, Jim! I listened to them, and you do a good job. You're right, the fire does wonders for the image--it gives the whole thing a cozy let's read feeling. Makes me want to light the fireplace, get a mug of cocoa, and warp myself in an afghan with a book.

Thanks KM. It was down to 16 two nights ago and still below freezing today, so our stove is being put to good use keeping the house toasty. ~ Jim

Very inviting video - and your reading was great! I hope this brings you lots of new readers.

I hope you pull in lots of new readers, Jim. Whenever anyone reads to me, I'm reminded of kindergarten reading circle. The teacher read to us from her chair. We were in a circle on the floor. Problem is--I always fell asleep. If I listened to audio books while driving, I'd be a menace on the road.

Glad everyone isn't like me--I think they are actually popular. Have you thought about making an entire book audio?

EB -- Well at least now if you need to go to sleep you have a choice of two more YouTube videos! I've considered the possibility of audio books. If you are going to do it, I think you need a professional to voice the characters. Listening to me for ten or twelve hours would probably not work well. Amazon's Audible is less attractive since they have reduced the author royalties.

I enjoyed your readings, Jim! I thought the fire in the stove was a perfect choice for the background.

Loved the setting and reading "Cabin Fever" is perfect. But mostly I loved the efforts you and your son went to! Don't think I could manage video, my daughter complains I cut everybody's head off in a still!
Hope you have a bazillion YouTube downloads.

Michele -- You solve the headless author problems by using a tripod and test shots -- although do notice Brad and I were the ones trying this all out. Jan shares your "talent" for "cropping." Remember at LCC how much she didn't want to take a picture of our panel using my camera. ,grin.