On a recent walk I spotted this bumper sticker. (Who knew a candidate with an anti-zombie platform ran for president in 2012?)


Last year I watched “Zombie Apocalypse” on The Discovery Channel. Shockingly, some scientists are studying if humans can turn into zombies. Also, there are “zombie preppers” who believe humans can turn and are ready for the inevitable in their underground bunkers. (I had no idea the undead were such a problem.)


However, excessive fear of the undead can lead to hazardous situations. In May, a man stole a big-rig in Temecula, CA causing several accidents which injured a number of people. The rig then flipped over on a freeway, blocking traffic for miles. When caught, the man said he was running from zombies. 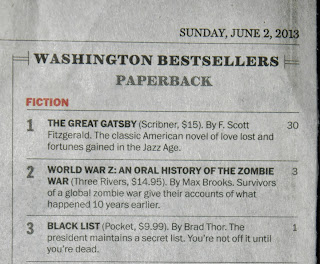 Zombies are alive and well in books too. This summer, #2 on the Washington Post Bestseller was World War Z: An Oral History of the Zombie War. It ranked above a Brad Thor book and was only surpassed by the classic, The Great Gatsby.


Jumping on the zombie craze, my county library held a talk by Isaac Marion, author of a teen zombie romance. They also taught kids how to make zombie pillows, apply special effect makeup to look like a zombie, and fed them pizza.


Surprisingly, The Centers for Disease Control and Prevention (CDC) uses zombie-mania as a promotional opportunity to encourage a new audience to visit their website and learn about disaster preparedness. They released a couple of tongue-in-cheek "zombie warnings," which are really disaster-preparedness stunts .


Then there are the practical jokers...  In February, the emergency alert system at a Great Falls, Montana TV station was hacked, interrupting a broadcast of the Steve Wilkos talk show. A message broke in announcing that "dead bodies are rising from their graves" and residents should seek shelter. It’s unknown how many people believed the message and took action.
But what is the definition of a zombie?


After hours of mindless research to answer this crucial question, I learned that a zombie is an undead person incapable of fatigue who will persist at any cost; a rote automaton powered by a supernatural force. 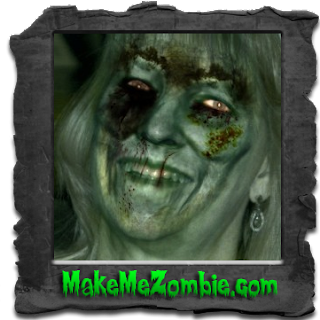 Not to be left out of a trend, I decided that October was the perfect month to embrace zombie writing.


Well, it’s a term I made up, but for me it means I pledge to give up distractions such as over-researching and reading for pleasure in order to concentrate on my writing. Like the indefatigable zombie powered by an otherworldly force, I will persist at any cost. I’ll keep writing and finish those stories that are languishing on my computer.


Perhaps I may even turn into a zombie.

Kara, I'm ready to join your movement. What do we call ourselves? Zombie-heads? Or maybe, Zombie-hands?

I like the Zombie Cheer:
What do we want? BRAINS
When do we want them? BRAINS

Thanks for the laugh, Paula and Warren. The brain cheer fits perfectly with zombie-heads!

Love this blog, Kara! No wonder Gary Johnson didn't get anywhere with his run for president, even though Zombies seem to be popular now. Is it because they're growing in number? From Warren's Zombie cheer, I think maybe there are more of them now that I think about it.

Kara, I think you would make an outstanding zombie. Your blog makes me wonder, though... do we have some zombies in Congress?

Your picture is down right scary, Kara. I'm not a Zombie fan. I tried reading an updated Wuthering Heights with zombies and couldn't stand it. I'm definitely into humans, with all the idiosyncrasies of humans. There is actually a drug that some unwitting tourists are injected with that turns people into zombies--really it attacks the brain. Here's the link to the article. The whole thing is nasty. http://www.globalpost.com/dispatch/news/regions/americas/colombia/130614/colombia-scopolamine-drug

Gloria, it’s interesting how a word becomes popular and then part of the lexicon. I just watched a segment on the news about pilotless F16 fighter jets that are called F16 zombies.

Shari, I desperately need BRAINS today as I struggle with my writing.

E.B., that was a frightening article about the zombie drug scopolamine. How awful to lose both your memory and free will. I understand why it’s called the world’s scariest drug.

Interesting discussion of all things zombie. All I can say is better you than me. 