I could, and thank you for inviting me to Writers Who Kill today.
Final Catcall is set around a theatre festival. The title is a play on final curtain call. It’s NOT the last book in the series, by the way.

The New Horizons Theatre Festival has been moved to the Stratton Theatre because of a fire at the theatre in nearby Red Wing, which means there are a number of actors and directors in Mayville Heights, including Detective Marcus Gordon’s sister, Hannah. Kathleen didn’t know Hannah was an actor. On the other hand, Kathleen’s relationship with Marcus seems to be over, so it doesn’t really matter anymore that he’s so secretive. Plus she has to deal with her ex-boyfriend, Andrew, who has shown up, trying to woo her back to Boston and back into his arms. When Kathleen and Andrew find prickly director Hugh Davis’s body out by the town marina, Hannah becomes a suspect in his death, and even though Kathleen and Marcus are supposed to be over, they keep ending up in each other’s lives as they both try to catch the killer.

In the last book, Cat Trick, Kathleen’s Walter Mitty like fantasies of tackling and seducing Detective Marcus Gordon show her frustration with him. Although Kathleen isn’t a fast and loose woman, in today’s hookup world, what’s his problem?

He’s a little slow, a little rigid, and not the most trusting guy. And in his defense, she keeps poking her nose into his cases!

As the series progresses, Kathleen communicates more easily with her cats. Is this due her increasing familiarity with them, or do they possess more intelligence and comprehension than she suspected?

Both. She’s come to realize just how special Owen and Hercules are and she’s getting more comfortable with that. She trusts her instincts when it comes to their abilities even though it all seems to defy logic.

Your setting of Mayville, a small town in Minnesota, has an active artisan community. It’s a

characteristic that I find realistic since I’m familiar with small towns. Do you think the isolation of small towns fosters artistic creativity or because of the isolation, people are driven to artistic pursuits?

I grew up in a small town and I think it’s a bit of both. Many creative people like the space and fewer distractions of a small town. As well, since there aren’t as many diversions, small towns can also inspire people’s creative sides.

Kathleen’s parents are actors. Her brother is a musician, and her sister is a filmmaker. Kathleen claims to have no artistic talent. Do you think solving mysteries is an art form? Is Kathleen in denial?

I think Kathleen’s artistic side shows in her ability to talk to people—and cats—and make them feel comfortable talking to her, and since that helps her solve mysteries, in a sense it is an art form for her.

Like Kathleen, you practice Tai Chi Chuan, a form of exercise. Could you give us the history and description of it?

Master Wu Chuan Yau, who was a member of the Imperial Guard, was the founder of Wu Style Tai Chi Chuan. He learned Tai Chi from the founder of the Yang Style. His son, Master Wu Chien Chuan modified the form and made it more like the Wu Style we practice today.

There are 108 movements in Wu Style Tai Chi. Cloud Hands has always been my nemesis so I made it Kathleen’s as well. I find that practicing tai chi has been great for my balance and it’s also become a form of meditation for me. It’s helped me develop more focus.

As Darlene Ryan you also write YA books. Between the two series, you’ve averaged having two books published per year for the last three years. You have to have a secret—no vacations? How do you do it?

My secret is that I used to write radio commercials. I shared a small office with two other people and

the radio station was busy and noisy. From that I learned how to write fast, how to write when I wasn’t particularly inspired and how to write almost anywhere. So I write in the dentist’s waiting room. I write in the car when I’m waiting for my husband or my daughter. I write on my exercise bike. As long as there’s somewhere to put my Alphasmart I can write. Yes, I can and have written standing up.

Publishing houses frustrate me. I tried to look for you under Obsidian, your publisher, but found you listed as a Berkley Prime Crime author. I assume Obsidian is an imprint, but why the subterfuge? Is there an advantage for the publisher to operate under an assumed name?

As I understand it, imprints evolved as a way for booksellers to know quickly where to shelve books in their stores. For example seeing Puffin Books on the spine tells me it’s a children’s book. Tor says science fiction and fantasy. I think as physical bookstores (sadly) disappear we’ll probably see some of the imprints merging.

Of your two genres, which do you prefer?

I like both for different reasons. The YA books are much darker. I enjoy being able to use that part of my brain. I like writing about issues that teenagers are dealing with. I like being able to talk to my daughter’s friends about their take on the world.

With the cozies it’s fun to write about a more idealized world. I enjoy having an excuse to spend more time with my friends’ cats. I like coming up with the puzzle of the mystery.

Your YA publisher, Orca Book Publishers, is a Canadian company. Is there a reason you chose them (or they chose you)?

They seemed like the best fit for my first YA novel. They have an excellent reputation and a great distribution system. Several of my books are being used in the school system in the southern US. One of them is also available in Spanish, which has given me another new audience. 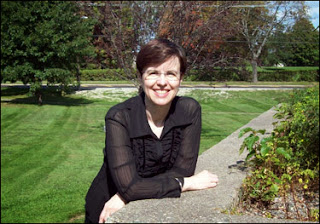 Do any cats own you?

Not at the moment, but I like to say there’s more than one that rents me. My husband is extremely allergic to cats so I can’t have one, although I always had a cat growing up. I’m very lucky to have friends who happily share their cats with me—and cats that are willing to be shared. One is right across the street and two are around the corner. Until she moved on to the next life, my neighbor’s cat, KC, used to spend part of the morning in my office with me. (Yes, that meant my husband never came into my office.)

Bonus: Which is your preference, beach or mountains?
Beach. I love the water.
Posted by E. B. Davis at 12:00 AM

Thanks for sharing on WWK. I admire your ability to keep two series going. Your books sound like a lot of fun to read.

Nice interview, Sofie. Your cat series sounds like a fun read. I have almost always had at least one cat. Right now I have two house cats, sister tabbies, and one barn cat that came as a stray and I know my house cats would not accept. I hope you do
well on both series.

Your series sounds great - I always like a librarian main character. Thanks so much for stopping by!

So great that you manage to keep two different sets of books going--the YA and the cozy mysteries! As soon as I get the edits, etc, done on the one I'm working on, I hope to branch out on a new venture, but I'd hate to leave Jesse, my protagonist from the series, behind. I hope I can handle that as well as you seem to be!

I'm embarrassed to admit I have 6 cats at the moment--none of them deliberately acquired. And my husband almost brought home a stray kitten the other day (thank goodness someone else decided to take her) When one shows up, I can't stand to see it hungry or try to chase it away--I get it "fixed" & a rabies shot, then turn it loose again. If it sticks around, it's added to the collection, and becomes a house cat if it chooses. If it takes off, I hope it's found a good home.

Thanks for the interview Darlene/Sophie. I've enjoyed reading your books and interviewing you. Good luck on the rest of your series and on your YA series.