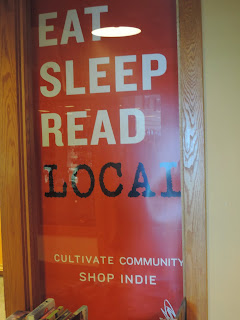 Jan and I took a wonderful trip around Lake Superior. We got to explore more deeply some areas of the Upper Peninsula of Michigan and to see a lot of country we had not seen before. One of the neatest things we did was to visit all the independent bookstores near our route (as well as stores in a regional chain, Book World).

My purpose was three fold: (1) introduce myself in the hopes they would remember me when CABIN FEVER comes out next year, (2) give them a copy of my novel BAD POLICY in the belief that if they read it they will like it, and (3) support the local stores by buying a book from them—not just any book, a book they recommended that was preferably by a local author who was unknown to us or a book set in the local area.

We visited eleven bookstores and here’s what we found: 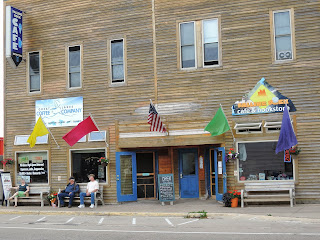 Falling Rock Café & Bookstore in Munising, MI was our first stop. Eli, the manager, made it easy for me. Since it was my first stop, I hadn’t yet figured out an approach, but it turned out he had a camp not far away from us and knew some of the locales used in CABIN FEVER. He thought about my request of a book to buy for a bit and decided on Bonnie Jo Campbell’s Once Upon a River. She’s an author from the Lower Peninsula of Michigan. I’ve found the time to read that book and enjoyed it quite a lot. 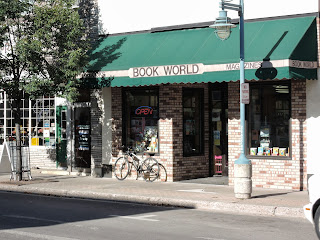 Our next three bookstores were in Sault Ste. Marie, MI. Because CABIN FEVER's setting is in Michigan’s Upper Peninsula, I included stores from the regional Book World chain in my visits. Local managers run each store. Although the corporate level makes some buying decisions, each manager does have some discretion, so I figured, “what the heck?” In the Sault, I met Norma who would pass BAD POLICY on to the manager. She recommended Ellen Airgood’s South of Superior, which I have not yet had an opportunity to read. 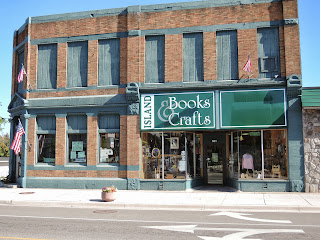 Next in the Sault came Island Books & Crafts. We had a good time talking with Pat. He wasn’t the “reader” of the family, but he’d pass my book along. When asked for a local author, he walked to a display and said something to the effect that locals like it because it’s set right here, but it’s not very well written. Needless to say, we didn’t buy that one. But the experience again proved that there are a lot of different things that make a book sell. 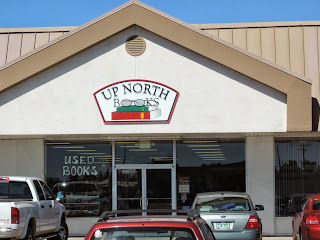 The third bookstore in the Sault was UP North Books owned and operated by Mike. The store contains mostly used books, but he has a section for “local” authors in which he stocks new books. He not only bought a copy of BAD POLICY, he recommended that we make a detour and catch a couple of stores not on our list. Mike is a great talker and we could have stayed for hours, except now we had two more bookstores and a couple hours of extra driving to do. Based on Mike’s suggestion and my interest in history, I picked up Drummond Island’s Part in the War of 1812 by Jill Lowe Brumwell. 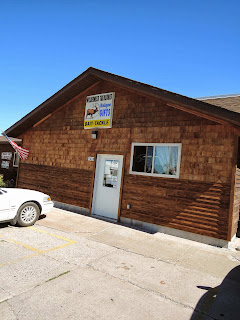 Our next stop was in Pickford, MI at Wilderness Treasures run by Karley and Tom Ball. It’s a combination, bait shop, shoe store, bookstore, and general merchandise shop. Tom is an author as well, and we had a good time talking about publishing and the U.S. Civil War. Tom bought a couple of copies of BAD POLICY and I traded another copy of my book for his, Guardians of Hallowed Ground Gettysburg. I did have a chance to read this alternative history novel of the battle of Gettysburg with the unique premise that five modern soldiers and their weapons appear in Gettysburg just in time for the 1863 battle, and it’s a good thing they are there because without them the battle would not have turned out as history records it. 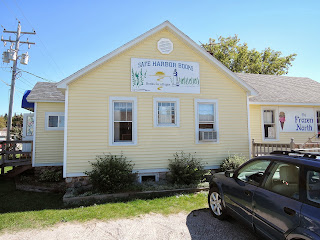 From Pickford we continued south to Cedarville, MI where we stopped at Safe Harbor Books. We met the owner Katie, who indicated the shop is seasonal. She took a couple of books on consignment and when we said we had not read PJ Parrish’s Heart of Ice, which is set in the UP, she suggested we pick that one up, which I did, and it now sits in my TBR pile. 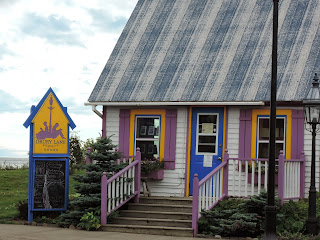 After crossing into Canada at the Sault, we traveled around the top of Lake Superior and reentered the U.S. in Minnesota. Our first two bookstores were in Grand Marais, MN. Drury Lane Books is owned by author Joan M Drury and so my selected book was one of hers, an award winner, Silent Words. We talked to Linda who was minding the store at the time. She pointed out that Joan had had to rearrange the store because she kept enlarging the mystery section. I thought that was a good thing. J She also mentioned that Joan had made a trip a number of years ago to all the independent bookstores in the Northwoods—but there were a lot more then than now. 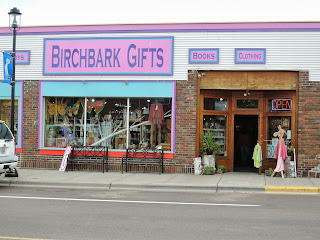 Also in town is Birchbark Gifts and Books. I met Judy, who is the bookstore manager. They have a whole area devoted to Lake Superior in one manner or another. Unfortunately, I’d have to stretch the truth a bit too much to justify putting CABIN FEVER into that niche. However, it turns out they have a very large mystery section and their definition of “local author” extends into the U.P. She had a number of recommendations for us and we chose Wolves by Cary J Griffith, which I have just started reading. 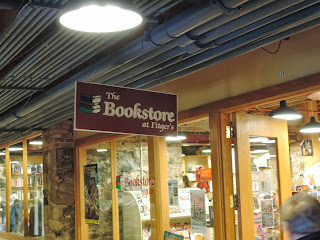 I entered Duluth with the names of two bookstores, but one no longer exists. That left The Bookstore at Fitger’s. They have a fine selection of Minnesota authors and a large mystery section. The clerk highly recommended Nancy Webb’s The Fate of Mercy Alban, which I haven’t gotten to start yet.

Both Ashland, WI and Ironwood, MI have Book Worlds. In Ashland I bought Mashiki Rapids by local retired schoolteacher Anne Rud Miller. In Ironwood I bought the nonfiction book Death’s Door by Steve Lehto, which tells the tale of a deadly fire in a Calumet, MI nightclub and suggests it was murder. Both books are on my TBR pile.

By the end of the trip this shy author had his patter down to introduce myself to whoever was running the store. We loved talking to people who love books and now have the opportunity to learn of several new-to-us authors.

Perhaps next year when CABIN FEVER comes out the visits will smooth the way for book signings and book placement. Even if that turns out not to be the case, we had a great time, met wonderful people and plan to do more bookstore visiting on future trips.

What an interesting trip. I immediately had to look at a map to try to follow your route. How long did your trip take? Do you know what the mileage was?Don't ask why I find such things fascinating. I just do.

And were there no bookstores along the lake in Canada? (It seems so quaint to call Superior a lake, considering its size. Yes, I know that size is irrelevant to whether something is a lake, but in my mind, I picture lakes instinctively as much smaller.)

We went slowly and took a bit over two weeks for the entire trip. That included spending three days in Thunder Bay while I played in a bridge tournament. Total mileage was just under 2,000 miles.

I only turned up one bookstore in the various Canadian towns we drove through and that was a used bookstore in Thunder Bay. Everyone I talked with at the bridge tournament relies on the library or online purchases - reading apps are very popular now.

From the bookstores you were probably able to get most of our route in the US, except that while we were in Grand Marais, MN we took the Gunflint Trail out and back, and after Ashland, WI we spent a day in the Porcupine Mountains (in Michigan by Lake Superior) and then wandered our way back home to the woods north of Amasa.

In Canada you would have missed our side trip up to Hearst, ON since there was no lodging in Marathon, ON (fall colour tours, eh?)

Nice to see your inquiring mind at work, Barb.

Loved your tour, Jim. Smart move to introduce yourself early in the game so they will be more inclined to book you for signings when Cabin Fever comes out.

Such a fun trip! I hope it results in the bookstores both buying Cabin Fever and suggesting it to customers (with none of the "not very well written" comments!)

All those wonderful book stores! I hope they all survive and thrive (and have copies of CABIN FEVER on their shelves when it comes out)

What a delightful theme for a trip! And how classy you are to buy a book, as well as offer a book. Your journey sounds like the perfect combination of marketing and fun, which is how we all want to do it, isn't it?

Thanks for the inspiration!
Anna Castle

Really nice article, Jim, and wonderful trip to boot. As Claire said, I also think it was a great idea to introduce yourself that way. Puts a face to the work for the indie book buyers. I'm guessing you live in Michigan (been there, done that), because your descriptions of places I've been to bring me back. Off the topic question, did you have any trouble getting into Canada? (Or perhaps the government was not shut down when you traveled across the border.)

cj - the trip was in September, so no problem with government shutdown.

Getting into Canada would not be the problem, since you just drive out of the U.S. Getting back in you need to go through U. S. customs. I suspect that Customs is deemed essential and are working, but I don't know that for sure.

Years ago it took me forever to get back in the U.S. With a name like James Jackson, there is always at least one bad guy with that name on their list. I often had to show my distinguishing scars or go through a bunch of ridiculous questions.

I suspect age is now in my favor because I almost always sail right through customs.

What a great trip, Jim, and I loved the pictures, too. When traveling with my siblings, we always look for bookstores, and I try to buy something in every one of them, too.
I didn't even think of bringing any of my books on my last 4 day camping trip because we were pretty well packed with camping supplies. It didn't stop me from buying books, though. I may copy your itinerary for the next long trip my siblings and I take.

What a good idea. For us lesser-known writers, it is the book store staff members who hand-sell our books.

What a great idea for a "working" trip! I'd love to do that. I hope it really works out for the new book.
Ana