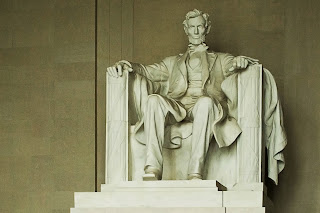 I don’t know if the experiences I had are common to historical fiction writers or not but I feel certain they have happened before.  When I wrote Abraham Lincoln for the Defense, a novel based on an actual murder trial in which Abraham Lincoln acted as one the defense attorneys, the available historical documents left some issues unclear.  I developed three possible scenarios and chose the dramatic for the book because it was also the most probable.

The story line required me to make certain assumption, or more accurately certain guesses based on flimsy evidence or no evidence at all about two men who played major roles in the trial.
SPOILER ALERT: Stop here if you want the mystery to remain a mystery.
One man was James Maxey.  In history and in my novel, he was the deputy sent to pick up William Trailor. In historical records I noted that other suspects living in or close to Springfield, Illinois were brought to jail by more than one lawman.  William Trailor lived the farthest from town.  He was rumored to be one of the killers and the mastermind of the crime.  Yet Maxey was sent alone to pick him up and return him to Springfield for trial.  Based on that one detail I decided to portray him as an experienced deputy with strong ethical beliefs.  I even had him decide to run for the office of Sherriff. With the names of the historical persons etched into my mind, some years after the publication of my novel I chanced across a mention of James Maxey and discovered that after the trial the Deputy Sherriff became a Marshall and served in that position with distinction for many years.  My guess of Sheriff was close to reality.

The other man was Josiah Lamborn. Both in history and in my novel he was Attorney General of the state of Illinois and prosecutor in the murder trial.  I had almost no other information about him.  Without going into boring detail, it advanced my plot to describe him as an alcoholic.  Again some years after the novel was published, I found an obituary for him that included the information that the promise he once showed was destroyed by his excessive use of alcohol. Again, sadly my guess was right on the money.

So, historical mystery writers out there, have you had similar experiences?

Wow, Warren! That's amazing. I'm a beginning historical fiction writer, and I invented an arsonist for a fire that was started accidentally. I think!

That's eerie. You must be a very good judge of character, though, even if you only have scraps of information to work with.

What a fascinating experience, Warren. I have a friend who writes historical fiction and is always telling me about her discoveries. I guess you can learn about history both through speculation and research!

Human nature doesn't change much over time. I write about Blackbeard. After my research and reading, I've inferred who he was and why he behaved in a particular fashion. There isn't all that much except for his final three years. His early years--nothing. So although crouched in fiction, our conclusions are based on what the literature supports given the period and the character. Extrapolating from that into our fiction--sometimes you make a reasonable prediction, other times you get lucky.

Interesting, Warren. Human nature doesn't change that much, does it.I started a middle-grade paranormal story based on actual historical figures in the small town I taught in with a fictional young boy, who died there when trappers and early settlers were just arriving. His father buried and left him there, and the ghost of the boy follows the settling of Hiram, Ohio. Someday I hope to get back to it and actually finish it.

it shows that you were really in tune with your period and the historical characters you were dealing with, Warren. Fascinating!

My novel that turned into reality is not historical but also interesting.

The theme is Japan starting a nuclear weapons program to deter an ever menacing China and what would the U.S. do about it.

It seemed very far fetched when I wrote the novel and I continued to wonder if readers would say, ridiculous.

Then these headlines appeared in The Wall Street Journal six months after the novel came out.

The novel is called The Pac Conspiracy. If you wnt to read the inspration for the novel and the characters please see my website; www.silklegacy.com

That's amazing, Warren. I love historical fiction based on real life events. I began writing some stories and made outlines for others. But, I never get beyond the beginning stages because I'm concerned about portraying the actual characters and situations correctly. Maybe I should try my best to interpret the research accurately and then take a leap of faith?

Between Occam's Razor and anecdotal information, it's not so farfetched a conclusion!

Did your research include the Washingtonian Group? (There's a Lincoln connection there, though slight)