Salad Bowl Saturday welcomes Matt Iden today to talk  his experience of finding the right place to set his novels.

For some reason I still can’t explain, when I started writing, I set my novels in places I’d never been, or only had been once….briefly. I had a particular penchant for choosing Phoenix and rural New Mexico, though I once plunked a detective down in east Philly (for the record, I’ve been to Phoenix once for four days, New Mexico never, and the only part of Philadelphia I’ve seen are the suburbs an hour west of the city where my mother-in-law lives).

I had the sense, which I think we can all relate to, that my own environment was too boring, too pedestrian, too known to be the setting for a whiz-bang story. How could I possibly thrill the reader—and make the setting as character—with such a ho-hum, try-not-to-yawn location?

Where does this guy live, you ask yourself. The Gobi desert? A bubble? The moon?

I live across the Potomac River from Washington DC.

Yes, you read correctly. Washington DC. The most powerful city in the world. The home of the Lincoln Memorial, the Washington Monument, and other Neo-Classical buildings used on the cover of far too many spy novels. The murder capital of the country, once upon a time. This was the place that I was afraid wasn’t thrilling enough to keep my readers’ attention.

Even more importantly, I didn’t have a sense of the other places at all, the ones that I thought were more interesting. I was using Google Earth, travel blogs, and local newspaper websites to cobble together the feel for places I was pretending to know intimately.

As wonderful as these resources are, they don’t give you the little details that often make the story. What’s the local grocery chain? Where does traffic back up at rush hour? What neighborhood can you visit during the day…but not at night? Where other writers were getting stuck on character or plot, I was getting tripped up—maddeningly—at a much more basic level: where my book took place.

The epiphany hit when I found myself at the library, looking for Lonely Planet guides for Arizona and New Mexico. This was stupid, I said to myself. I wasn’t going to get my setting from a book or a website. I needed to find it by putting my shoes on and walking it. And I could only do that, for the most part, in the place where I lived.

Since then, I’ve set four novels, one novella, and several short stories in and around D.C. Readers who know the D.C. Metro area often cite the accuracy of my descriptions, while people who don’t, say they feel like they do after reading one of my books. From my side of things, I’ve stopped agonizing about the where of my scenes and instead get to spend time on the quirky and memorable details of a setting instead.

Sure, I hear you say, you live in one of the most identifiable cities in the world. Setting is easy. I’ll admit, it’s easier to plug into reader expectation when you’re dealing with a place like our nation’s capital than trying to describe a failing steel town outside Pittsburgh or fisherman’s village on the Chesapeake Bay.

But I actually find myself avoiding the clichés of my city. The Capital building is stunning at night, but what use is it when describing a murder scene? We all know what the White House looks like from news reports, but it might as well be in Phoenix for all I know about it personally (like Phoenix, I’ve only been there once).

So, instead I’ve found myself walking the DC waterfront or the revitalized neighborhood around the new baseball stadium. I’ve discovered landmarks that never make it onto the six o’clock news, like the moving National Law Enforcement Officers Memorial, which figures prominently in my second novel, Blueblood. I get the feel for a neighborhood by being part of it, not by ordering up tired views of monuments the world knows already from CNN.

If you’re having trouble with setting, my best advice is: go for a walk. Write where you know. Someday you may be lucky enough to take a research junket for that thriller you’ve set along the canals of Venice, but until then, I guarantee you’ll find it more rewarding—and your reader will, too—if you write where you are taking place. 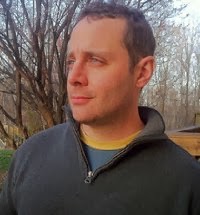 I agree totally, and yet as I say that I used Paris in a recent book, and have never been there. Sometimes Google earth, maps, and other peoples vacation photos are all you have.

The pull of the exotic and foreign might be great, but to write about a place, you must be able to feel it. I doubt if pictures will afford a writer a three-dimensional understanding of a setting. To feel a place, you must live there. If you don't--natives of the setting will not agree with your depiction and your integrity will be blown. The alternative--create a setting. Give it any attributes you want--no one can dispute you.

Matt, thanks for this important reminder. It's so exciting to find a story close to where you live. It gives you a new perspective on your community and a mini-vacation of sorts. Now, there are so many places I pass that I associate with stories as well as experience. Thanks for being here at WWK!

Matt, many thanks for sharing your insights into setting. I love it when a book immerses me in a place (and time) so fully that I feel like I am there among the characters.

Thanks for joining us today, Matt.

I agree that if you are using a real place you had better know it well. However, readers are happy to "live" with your characters in an imaginary place and there you need to paint it well and consistently.

Welcome to WWK, Matt. I agree with you about using a place you're familiar with for your books, although you can create a fictional town in the area you live and still get a strong sense of place. I've done that with my books.

However, I don't think it's as important for short stories. I've visited New England a lot and love it so I set many of my short stories there or in some vague place like near a lake and a fictional town. For short stories character and plot seem more important than detailed descriptions of place.

Good advice, Matt. As far as I know I am the leading writers about the mean streets of Manhattan...Kansas.

Thanks, everyone! I've found a personal attachment to setting important for all novels, but especially for a series, where those little touches I mention become oh so important to really communicate the feel for a place.

Gloria - for short stories, I agree, it's not nearly as important, but we all know those single, telling details are so helpful and never more so than in shorts. I've learned to stay on the lookout for those things--meaningfully observing those precious details--that help me with shorts. "Intentional looking," I guess you could call it.

It's when I'm sitting around, trying to turn vague, vacation memories into concrete fictional details that I know I get into trouble!

I do think you need to have a strong sense of place to write convincingly about it, and that's it's much easier if you're very familiar with a place.

Like Gloria, I usually use a fictional town set in a real region, combining elements. It's based on Hagerstown and Taneytown, MD, with a bit of Fairmont, WV thrown in.

That accomplishes two things--it lets me put a riverfront & other in an older "rustbelt" city which has a prison complex as a major employer, and it means that when I place McDonalds three blocks away from the courthouse, I won't get a raft of people telling me it's really four blocks in the other direction, and not on a corner at all.

I admire people who can weave a background out of a real place, and have everyone agree it's accurate.

I know all of the places you named since my son went to Frostburg, worked in Cumberland, and he married a young woman from Flintstone!

Cumberland has a fairly newsprison complex, too--but it's mostly maximum security. And it has death row. When they had to break up the Deadmen, Inc. gang they changed WCI to maximum & special, including a lot of protective custody.

Yes, KM. That's why they are in Atlanta now. He's getting his doctorate. She's a physical therapist, working so he can study.

We got a little off topic here, but I had to say something when you mentioned all of those places. So--there are those who know the areas where you write--wherever it maybe, so no fudging, writers!