Thank You Erle, For The Reminders! By Jule Selbo

Erle Stanley Gardner’s books lined my father’s bookshelves. My dad, like Gardner’s most famous character, Perry Mason, was also an attorney, and he was of Erle’s era: women were meant to be wives, daughters were expected to obey, and men were in charge. (My dad, fortunately, by my high school years in the 1980s, had evolved.) I’ve been re-reading Gardner’s most popular series for the last months – and despite the evident 1930s, 1940s and 1950s chauvinism, the sporadic political incorrectness and racial stereotypes, and the proliferation of women hiking their skirts up above their knees to show a shapely gam, I’m taking away some “swell” reminders for my Dee Rommel Mystery series. 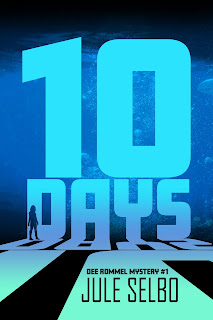 Even Gardner’s description of Perry Mason in The Curse of the Careless Kitten (1942) is inspiring in its thorough ability to give us the author’s version of a perfect protagonist: “Perry Mason had that peculiar, confidence-inspiring magnetism which is so frequently found in tall men. In repose, his features and his manner had the weathered patience of hard granite. But… in critical courtroom crises, he was a fast-moving, quick-thinking force, molding men’s minds, out-thinking (all) antagonists…” And Gardner upped the character stakes by making sure Mason did not do all his “lawyer-ing” in the courtroom.

Parnell Hall, author of the crossword series The Puzzle Lady, writes, “Perry Mason was always doing such outrageous, outlandish and downright illegal things… a Perry Mason book was not so much a whodunit, as a how-will-he-get-away-with it? (He’s) skating on thin ice, finding evidence, concealing evidence, juggling evidence, and planting evidence.” Now, that’s fun.

The first book in my crime mystery series, 10 Days, A Dee Rommel Mystery, was released August, 2021; it’s been well-reviewed and many readers have pointed out their delight with Dee’s tendency to head straight into trouble. Since I’m working now on 9 Days, A Dee Rommel Mystery, I use my reading of the Perry Mason books as a reminder that cool logic, reasonable caution, cerebral out-thinking are not the only goals. It’s to have “a gas”, to push Dee Rommel to the edges of danger and challenge her in emotional, physical and psychological ways. I imagine I hear Gardner’s coaxing “…let Dee make the wrong choice, at times. See what happens. See how (or if) she can right the ship.”

Gardner’s series also serves as Reminder #2 - to embrace a little aggressive chaos – and relish it. In Case of the Careless Kitten, Mason turns down a big-money, boring equity dispute to take on an if-come case because, he says: “(it) sparkles with mystery, adventure, romance… it’s cock-eyed and crazy... It’s one hell of a swell case.” In 10 Days, even though Dee Rommel begins as a “reluctant hero,” she ends up diving in because puzzle-solving, for her, is addictive.

Reminder #3: Keep the story paramount. Gardner didn’t spend much time on describing his California locations; they’re quick and concise. He writes: “… the car climbed rapidly, the screaming siren alternately roaring back in echoes, then being swallowed up in the vastness of the deep mountain canyons…” Case of the Careless Kitten (1942). He also describes characters sharply, sometimes teasing the reader into a smile. Such as: “She flowed across that office with the rippling, effortless progress of a cylinder of jelly sliding off a tilted plate.” The Knife Slipped (1939). In 10 Days, my protagonist Dee has a chip on her shoulder, and it’s hard to win her trust, so characters are always seen through her semi-cynical lens.

Reminder #4: As a reader, I enjoy hearing the opinions of characters; Gardner often allowed his characters to share their philosophy on the human condition. “When a man starts running away from things in life, he builds up a whole chain of complexes and fear.” The Case of the Grinning Gorilla (1952). In his Cool and Lam books, Gardner allowed his hard-smoking, obese private detective Bertha Cool to vent, “… people are sheep, made to be sheared. They love to worship public officials who play politics. Every eight years, the people swallow some politician hook, line, and sinker and make him president. They hold him on the political stomach for about six years. Then they commence to get indigestion because the politicians quit pouring the soda bicarbonate of publicity into their stomachs. At the end of eight years, they vomit him up in order to swallow someone else, and the process is repeated.” The Knife Slipped (1939). Bringing this back to my book, 10 Days, one 5-star reviewer on Amazon commented: “…the mystery focuses around AI and tech industries, it was fascinating and freakishly timely.” Dee Rommel has definite biases on this topic (mostly having to do with privacy rights) – and the antagonists disagree. It was fun to explore the pros and cons in this topical arena.

Reminder #5: Gardner, even after he closed his law practice to commit himself totally to writing, was inspired by real cases. Many pitted the desire of women wanting independence from domineering men or the false assumption of the wealthy and privileged that they could   with murder. Other plots were inspired by the program Gardner founded: “The Court of Last Resort”; a legal aid project dedicated to help those who had been convicted due to careless or malicious actions of prosecutors or police. Gardner has inspired me here too – I cull though police and prison records to remind myself that greed, vengeance, jealousy, lust, psychoses, and countless other societal maladies are active – and dangerous - parts of our society. That reality can certainly inspire fiction.

So, thanks, Erle for the great reads and “lessons”.

Erle Stanley Gardner wrote 155 books and more than 400 articles before his death in 1970.

Jule Selbo’s crime mystery novel, 10 Days: A Dee Rommel Mystery (Pandamoon Publishing, August 2021) is the first in a series. Jule absconded from Hollywood and her work there as a produced screenwriter to Portland, Maine to concentrate on writing novels. After writing three award-winning historical fiction books, she has now worked up the courage to dedicate herself to her favorite genre – the crime/mystery. She’s near completion of the second in the series: 9 Days, A Dee Rommel Mystery.  https://www.juleselbo.com

We had a bunch of Earle Stanley Gardner books on our shelves at our summer cottage. They sat next to Rex Stout, Agatha Christie, which all fed my love of mysteries.

Congratulations on your debut mystery!

Great take-aways from Gardner, Jule. Your post made me dig out my old copy of Secrets of the World's Best-Selling Writer: The Storytelling Techniques of Erle Stanley Gardner. Thanks! And thanks for stopping by Writers Who Kill.

Congratulations on your debut! Like Jim, I read my grandpa's Rex Stout, Ngaio Marsh, and ES Gardner books at my grandparents' Cape Cod cottage.

Nothing like reading the old masters for entertainment and enlightening.