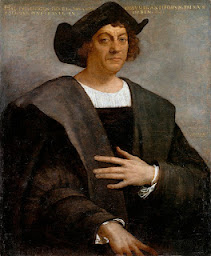 October, in the United States, is the month when we observe Columbus Day, celebrating the rapist, enslaver, torturer, and murderer who accidentally landed in the Caribbean while trying to find India. Apparently, not the brightest bulb on the planet, either. (This day used to be known as Lost Italian Day in my family.)

In many cities and states, however, enlightened people have chosen to celebrate Indigenous People's Day, in honor of all those who were robbed of lands, killed, and enslaved by Columbus and those European invaders who followed his lead and of their resilience and that of their descendants.

As this holiday comes around again in our ever more divided nation--with many people who now say publicly that they would willingly emulate those people like Columbus who killed and enslaved Native people--here is my Columbus Day poem.

Sometimes in the fall of the year,

for they do more ravening

than any natural animals

who would be ashamed

to make welcoming people into slaves,

rape women and girls before killing,

for the vicious excitement,

the sense of power.

Power, it’s always all about

power—and gold and sex and land

in the name of Catholic Christ

and empire. Land, millions of miles,

because no one else discovered

it, not even the millions living on it.

With a wave of a papal pen,

use for rebellious Natives.

from sea to shining

with sales and parades.

Sometimes in the fall of the year,

I grow so tired

of anger and tears,

the bitter stink of history.

Thank you, Kait. As you might be able to tell, I feel quite strongly about this issue, as do many of my Native relatives and friends.

Very moving. Thank you for publishing it on WWK.

I'm afraid this is just one example of man's inhumanity to man. History is full of such happenings, although not often on such a grand and public scale.

Very appropriate that representatives of those who have been wronged should speak out and call attention to our outrageous attempts to whitewash and glorify such erroneous and one-sided records.

Sometimes I despair of us ever climbing out of the pit into which we have fallen.

Km, you are so right. Fortunately, the mayors of a number of cities have been listening to their Indigenous citizens and are switching this day in their cities to Indigenous Peoples Day. Bit by bit, progress is happening.