Saralyn Richard and I are both members of the Blackbird Writers. We've discovered we have many things in common, among them we were both teachers and we both write mysteries and books for kids. Her mysteries are well-written and have won several awards.

How did your earlier career in education influence your becoming a fiction writer?

It really didn’t. In fact, my career in education delayed my writing for several decades. The years I was a teacher, administrator, and school improvement consultant, I had to put writing on the back burner. I didn’t have the time or discipline necessary to tell stories.

Those were not wasted years, however. I was fortunate enough to be surrounded by thousands of diverse, interesting people, whose lives offered insights about human nature. Getting to know people and helping them address their challenges is a fertile training ground for an author of fiction.

I also believe that there is a strong similarity between the acts of teaching-learning and writing-reading. In both cases, you can’t have one without the other.

Inspector Parrott, the sleuth and protagonist of your mystery series, is a wonderful character. How did you go about creating him?

I’m so glad you enjoy Detective Parrott as much as I do. Parrott actually appeared to me, fully-formed, when I was writing Murder in the One Percent. He’s African-American, male, and just starting out in his career—all things that I am not. He is, however, well-organized, morally grounded, and serious about righting wrongs—all things that I like to think I am. Having worked in mainly urban high schools, I’ve known and nurtured many “Parrotts.” I understand his struggles and ambitions, and I enjoy exploring them in each of the books. Because I want him to be authentic, I sometimes rely on my former colleagues and students to help vet particular details.

Now that I’m writing the third book in the Detective Parrott mystery series, I know his character as well as I know my own. He inhabits my dreams and whispers to me quite often. He always has a lot of fascinating things to say.

Why did you set that series in Pennsylvania?

I mentioned earlier that I’ve been collecting ideas for novels for a long time. Some years ago, I attended an elegant birthday party at a country mansion in Brandywine Valley. The area impressed me as so lush, so peaceful—the last place you’d ever expect a murder to take place. The night of the party, after a nine-course meal with wine pairings, I turned to my fellow guest and said, “This would be the perfect setting for a murder mystery.” That was the seed for Murder in the One Percent and then A Palette for Love and Murder.

One of the things I love about the series is that Detective Parrott is an outsider in this community that he serves. The ultra-wealthy people who inhabit that community, many of them horse enthusiasts or artists, have different ideas and different ways of behaving. Yet his outsider perspective is exactly what makes Parrott so successful in solving cases.

Your books include a variety of settings, topics and occupations. Bad Blood Sisters, the book I've just finished reading that's scheduled to come out in March, has a protagonist whose family owns a funeral home. How did you research for this profession?

Because I write murder mysteries, my books often have funeral scenes in them. Whenever I’ve had questions about funerals, I’ve gone to professionals for information. That’s how I met a Pennsylvania mortician, who has become a friend. I also know a local funeral home director in Texas who answers my questions whenever I have them. Through my conversations with them and others, I became intrigued by the question, “What if a woman working in death services were faced with having to prepare the body of her estranged best friend?” That was the seed for Bad Blood Sisters.

I find it interesting that you alternate each Parrott book with a stand-alone mystery. How did you come to write your books in this order?

I didn’t plan this pattern, and, in fact, the writing order was not exactly the same as the publication order. The alternating writing order just evolved. I must say, though, that I like returning to a new Parrott novel after I’ve been immersed in a different world with a standalone novel. I believe that writing a new setting and new characters ignites my imagination and allows me to grow as a writer. After a “vacation” from Parrott, I’m always looking forward to coming home.

I used to claim to be a pantser. I don’t outline, beyond having a general idea of beginning and ending and the main character’s arc. I like the spontaneity and freedom to let the story go where the characters take it. Over the years, though, after painting myself into more than a few corners, I’ve understood the value of having story anchors. So now I would say that I am a planter.

What do you think is the most effective way to reach your readers?

I teach creative writing to adults, and one of the most important things I encourage my students to do is to write from the heart. If an author tells her best story the best way she knows how, and she enjoys the writing experience, that passion and effort will flow through to the reader. For me, connecting with readers is the best part of being a writer.

Who are some of your favorite mystery authors that you love to read?

Some of my tried-and-true favorites are Agatha Christie, Michael Connelly, and William Kent Krueger, but I love finding new favorite mystery authors. I can highly recommend many of my fellow Blackbird Writers and members of The Stiletto Gang, including someone you know well, Allison Brook.

What advice do you have for someone first starting out as a new mystery writer?

Think of your book as an intellectual and emotional puzzle. The way you unveil the various pieces can make or break the experience for the reader. As in so many other artistic endeavors, timing is everything.

Many of Nana’s fans have clamored for a series. They’ve suggested lots of interesting ideas:  Nana Goes to Hollywood, Nana Goes into Outer Space, Nana Finds a Best Friend. I’d love to pursue some of these, and I also want to write the story of a tame cheetah I once met. And then there are contemporary topics like day care, staying healthy, and dealing with violence. I’m full of ideas but short on time, and right now my adult novels are keeping me super-busy.

What new books do you have coming out or are planning to write?

My most recent release, A Murder of Principal, goes behind the scenes of an urban high school when a new principal upsets the status quo. Next will be Bad Blood Sisters, in which a young woman’s past comes back to haunt her when her former BFF is killed, and what she’s buried puts her in extreme danger.

Currently I’m writing the next Detective Parrott mystery, still untitled. This one will be released in August, 2022. 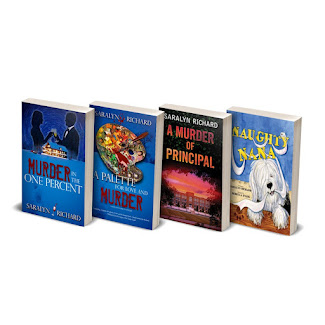 Posted by Marilyn Levinson at 12:30 AM

Email ThisBlogThis!Share to TwitterShare to FacebookShare to Pinterest
Labels: A Murder of Principal, A Palette for Love and Murder, Murder in the One Percent, Saralyn Richard

I love your seed for Bad Blood Sisters. It's great when those intriguing seeds turn into full-fledged novels.

I enjoyed reading your path to publication. Wishing you continued success.

Saralyn,
I'm so glad to have you as our guest today.

Many thanks to Marilyn Levinson for this fun interview! Marilyn is one of my favorites, so it was pure joy. Thanks, also, Jim Jackson and Margaret S. Hamilton. I'm glad to connect with you here.

Great interview. Really pleased for an introduction to a new writer! I'll have to look into these.

Thanks for reading, KM. I'm pleased with the prospect of a new reader, too!

I enjoyed this interview--great questions that give readers a glimpse into Saralyn and her work.

Thanks for taking the time to visit, Yvonne. :)

Interesting and informative interview, Saralyn. When I saw your name on the blog, I just had to read! You've contributed a lot to our Encircle Happy Hours. Good luck with your next books!