It was the fall semester of junior high in 1959, a year in which I experienced a traumatic situation that has stayed in the storehouse of my memory, while other events of my early years of schooling have slipped away. My typing teacher, Miss Miller, was hardly five feet tall, but she welded a seven-foot aura of discipline, and we thirteen-year-olds were impressed. This was a time when teachers were not your friends, and if you got in trouble at school you were in double trouble at home. Looking back, I don’t blame Miss Miller for doubting me, but the trauma of being called a liar stayed with me for a long time. I’d like to think I’ve taken this experience and softened its hardest edges into traits and skills I use even now as an adult.

We had been in school for several weeks of the semester. Now it was finally time to take our first timed typing test. You could sense the anxiety hanging heavily in the air. Miss Miller tapped on a bell and the typing commenced. All we could hear was the clickity-clacking of keys as my fellow eighth graders hunched over their typewriters, squinting at the sentences they were supposed to replicate. It was the “touch method,” typing while not looking down at the keys.

The bell dinged again, and everyone stopped. We traded papers with the person sitting next to us, and we counted the number of words and errors. Then Miss Miller called on each of us, and we dutifully repeated the results. Aloud. When she got to the student who had checked mine off, she said, “Sixty words. One error.”

I would like to think everyone gasped, but my memory didn’t record that distinctly. Suddenly, Miss Miller was on her feet, walking back to inspect my work. She plied me with questions about whether I’d secreted this paper in my notebook and replaced the actual test with this result. When I replied that I hadn’t cheated, she said, “We’ll see.” Then, she had me repeat the test all by myself while twenty-five students silently watched. I don’t think I replicated the timed test exactly, but it was close. The bell rang, the others left, but I had to stay and explain. 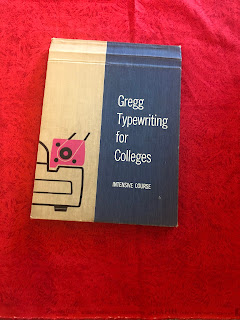 Our conversation has melted from my memory, but I know Miss Miller was finally satisfied by my answers. You see, the past summer I was bored, and because I could only read so many books over so many hours a day, I decided to teach myself how to type. I bought a book that taught me in endless steps, how to type by touch. Every day I practiced and practiced. It was the most amazing thing, as if you were taking a class on your own at your own speed. I’d never done anything like this before, but I was determined to apply myself and finish it before school began again.

Little did I know decades later computer keyboards would come into my life, and because I could type quickly and accurately, they’d be a cinch to learn. Little did I know I’d become a teacher myself and remember what not to do when I doubted a student’s word. Little did I know that my motivation in taking that typing course would translate to my perseverance in writing a three-hundred-page mystery manuscript. Little did I know that I’d create mysteries with heroes who were known for their sense of justice and their anger at their honesty being questioned. 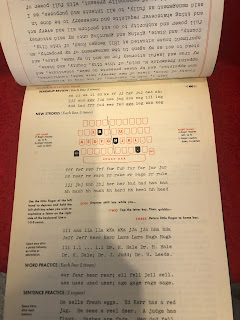 As an adult, I’m so grateful that I learned to type well and accurately because that single skill has taken me a long way in life. Miss Miller refined some of my errors from trying to learn on my own—like typing numbers easily without looking—and she never questioned me again once she learned about my summer project. In fact, she was kind when I saw her one day as I was walking home from a job when I was in high school. She was sitting outside on her front porch knitting. We had a pleasant conversation—she was retired then—and neither of us mentioned that horrible day in her class. She probably didn’t even remember it.

Even now, as I type a blog post for Writers Who Kill, I can see her face and smile because the memory of that day has translated in my head to traits that have helped me over a lifetime.

I'm grateful I learned to type as well. But no one would ever have accused me of cheating on my typing tests! I thank goodness every day for the backspace and delete keys!

I, too, taught myself to type, but much later than you. It was the summer between junior and senior years in high school. I figured it would be a good skill for college -- and it was. It might have been better if I took an official course, because things like numbers and symbols still require me to peek at the keys.

Thankfully you took that horrible situation Miss Miller put you in and made it into a positive.

Annette, I agree on favorite keys, and nowadays would add copy and paste.

It's great that you've taken something positive away from a negative. I bet Miss Miller did remember that day. I bet she felt bad that she didn't believe you. But as you said, it was different back then-- as a rule, adults didn't apologize to children. Perhaps your honesty taught her a thing or two, as well.

But still, Jim, you learned a skill that not only helped you in college but also with computers. Sometimes we fall into great things, but you should smile and say you saw those computer keys coming.

Yes, Molly, that would be a Hallmark moment, although there would have to be a boyfriend involved to I suppose! No, no apology, but she wasn't so scary after that.

I'd like to think you are right, Korina. I've had those moments as a teacher, and often thought about them later.

What a story! I hated junior high typing class, but by high school, was typing notes, letters, and dreary poetry. Somehow, the words came faster and easier when I was typing.

Like you, I taught myself how to type. Now it's something I do throughout the day. I valuable skill, even if I didn't master the numbers.:)

I've always said typing was the most important thing I learned in any school, from kindergarten through graduate school. Kudos to you for perseverance and for learning so many lessons from an upleasant experience.

Margaret, This sounds a lot like my experience too.
Marilyn, I’m with you. What a practical skill we learned.
Judy, I have a poor memory, but something like this sticks around because it’s attached to emotions. As always, the rearview mirror conclusions are easiest.

These memories from childhood crop up and haunt me on occasion. I wish there was a way that we could zap selected memories never to be bothered by them again. I'm glad you were able to turn this one into a positive one .As far as typing, I'm so glad I learned to type well. But there was a period of time in my career where women learned to say they couldn't type. If you admitted that at a meeting, you were always the one assigned the task of typing the meeting minutes. And it was the women who ended up with the chore.

You're so right about everything, Grace. We did live in a different time when it comes to various typing events. Even now, it seems like women end up with the secretary spot when it comes to recording minutes. Old ideas die hard.

When my brilliant, great student, destined-for-great-things sister entered high school, my aunt discovered that the school did not have a typing class. Obviously this child would be going to college and would need to type. She brought a typewriter and a typing program in the form of a book and put it in our room for my sister to use. I was not supposed to "mess" with it. After the first two weeks, my sister grew bored with the whole project & pretty much abandoned it. I, however, set about going through the lessons and taught myself to type. I don't think anyone but me ever realized that, but being able to type (keyboard now) reasonably well has been a tremendous asset.

Well, Kathleen, did your sister ever learn to type? You seem to have gotten the best of that deal!