The Rest of the Story by Connie Berry 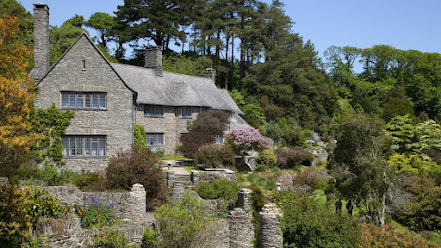 In The Shadow of Memory, the fourth Kate Hamilton mystery (May 2022), Kate’s wise and sensible mother says, “Truth is always more interesting than fiction, Kate. It’s more complex as well.”

Three days ago I returned from a long-awaited trip to England. My specific purpose was research for a new Kate Hamilton mystery, but I always remain alert to unexpected insights. One of them came on a visit to Coleton Fishacre, a lovely Art Deco National Trust property set in a wooded valley on the south coast of Devon.

The site was chosen as a country retreat by hotelier, theater owner, and impresario Rupert D’Oyly Carte and his wife Lady Dorothy, the younger daughter of the Earl of Cranbrook.

Construction began in 1925, and the D’Oyly Carte family—Rupert, Dorothy, their son Michael and daughter Bridget—moved in a year later. The charming house remains exactly as it was in the 1930s. The setting is idyllic, with hills rolling down to the sea, a tidal pool, and extensive gardens, one of Lady Dorothy’s main interests in life. The day my husband and I visited the sun was shining. What a glorious place to live, I thought. 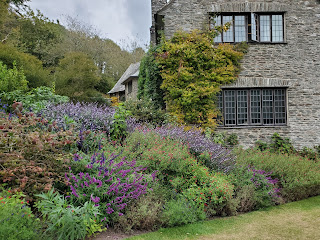 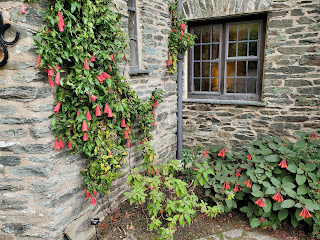 Then I learned the rest of the story.

Tragedy struck in 1932 when Michael, age 21—the oldest child, favored by his mother and indulged by his father—was killed in a car crash in Switzerland. The car had been a gift from Michael’s father, purchased over the strong objections of his mother. Reports at the time claimed Michael was headed for the gambling tables of Monte Carlo.

The family never recovered. Rupert and Dorothy separated, and in 1936, divorced. Bridget, who idolized her brother, refused to sleep in the house. For years, while visiting her father at Coleton Fishacre, she stayed in a caravan (a camper). As soon as her father died, she sold the property to the National Trust.

For me, Coleton Fishacre, the lavishly beautiful, sunny retreat on the south Devon coast, will always be connected with tragedy and the resulting devastation of a family.

What we see on the surface of things is never the whole truth. That’s what mystery fiction is about, after all—uncovering the complex and unexpected story behind the façade. Telling the rest of the story.

What unexpected insights or experiences have shaped your writing?

What have you learned about life through reading?

Very interesting, Connie. Scrape away the surface of anything and we find its painted-over scars and therein lie the tales.

Fascinating family story and the gardens! On my list for my next visit to England.

The more I write about my main character, the more I learn about her. I'm reading WKKrueger's latest, with a 12 year old Cork O'Connor solving a case. I'm freewriting my main characters at age 12, hoping to gain insights into their on the brink of adolescence characters.

What a sad story. It seems some families, and locations, attract more than their share of tragedy.

How I miss the trips my husband and I used to take to England! So many wonderful memories. Your recent visit brings it all back.

We all know that many things happen in life that are much too improbable to include in our fiction.

The pictures bring to mind the 9/11 tragedy, when horror flew out of a stunningly beautiful blue sky. Looks can be deceiving.

Such a sad story. Did you get a feeling of melancholy while strolling the grounds?

You've captured the essence of mystery stories in this insightful, poignant essay, Connie. This shows why your books are so good.

Really This goes far beyond the commenting! It wrote his thoughts while reading the article amazingly ​
80D Preventive Health Checkup Dependant Parents

Very interesting , good job and thanks for sharing such a good blog.
Which Team Has Most Fans In Ipl