An Interview with Krista Davis by E. B. Davis

To be honest, I was glad I didn’t have friends who would

send me a human skull. I frowned at it.

With Halloween just around the corner, the fall colors in Georgetown are brilliant. As manager of the Color Me Read bookstore, coloring book creator Florrie Fox has arranged for psychic author Hilda Rattenhorst to read from Spooktacular Ghost Stories. But the celebrity medium arrives for the event in hysterics, insisting she just saw a bare foot sticking out of a rolled-up carpet in a nearby alley. Is someone trying to sweep murder under the rug? Florrie calls in her policeman beau, Sergeant Eric Jonquille, but the carpet corpse has disappeared without a trace. Then in the middle of her reading, Hilda chillingly declares that she feels the killer's presence in the store. Is this a publicity stunt or a genuine psychic episode? It seems there's no happy medium. When a local bibliophile is soon discovered missing, a strange mystery begins to unroll. Now it's up to Florrie and Jonquille to expose a killer's true colors . . . 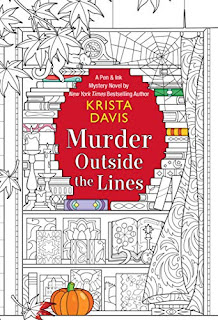 In this third episode of the Pen & Ink mysteries, Krista Davis writes a spooky Halloween mystery set in Georgetown, a historic area of Washington, D.C. I went to college in D. C. and spent many fun times there so reading this series is a treat and a walk down memory lane. In Murder Outside the Lines, Krista gives us a roaming skull, spiritual mediums, disappearing corpses, not disappearing corpses, and community spirit during a time of haunting spirits.

Thank you! It’s a pleasure to be here again. If you are reading this and wondering about the cover, it’s designed to be colored. Read the mystery inside, and color the cover outside! Both the front and back covers can be colored. And there are clues hidden in the images. The idea is to make the book your own and color it the way you imagine Florrie Fox’s world.

Main character, Florrie, has pets. Do they both go to work with her? Please tell our readers about her pets.

Florrie has a cat named Peaches, who goes to work with her some days. If you look carefully at the upper left corner of the cover, you’ll see Peaches lounging in the bookstore window.

Frodo, the golden retriever, belongs to Florrie’s parents and generally only stays with her when they are out of town. He is always welcome at the bookstore.

Not only does Professor Maxwell own Color Me Read, the bookstore Florrie manages, but she also lives in the carriage house behind the Maxwell mansion. How did that happen?

The first book in the series, Color Me Murder, is all about how she came to live there. Anyone familiar with the greater Washington D.C. area knows very well how expensive it is. Florrie had just about given up searching for an apartment close to Color Me Red bookstore in Georgetown when the professor offered her the carriage house so his abhorrent nephew wouldn’t live there.

The action starts when a deliveryman plunks down a crate addressed to Professor Maxwell containing a human skull, Harry, named by the private investigator who sent it. Florrie wonders if it is legal to possess a human skull. Maxwell states that only three states have laws about possession of human skulls. What states are they and what do the laws state?

I’m not an expert on this. From what I have read, Georgia, Tennessee, Louisiana, and now New York have laws that prohibit selling or ownership of human remains. In addition, there may be laws in those states as well as others that consider detaching human parts as desecrating a corpse. There are generally exceptions for medical and scientific purposes. Apparently, you can buy skulls online. I can honestly say that I have not tried to buy one, nor do I wish to have one. 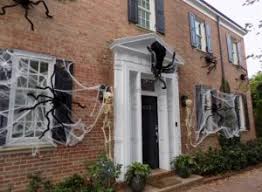 I haven’t been to Georgetown in a while. Do the stores and residents decorate in a big way for Halloween? There is a scene in the movie The Exorcist set in Georgetown. Why is it a spooky place?

Georgetown is fabulous and probably more romantic than spooky, but a lot has happened there over the years, good and bad. The famous stairs in The Exorcist are sort of creepy because they are long and steep and set outdoors between two tall buildings.

Halloween is huge in Georgetown! They go all out. There’s a photographer who takes a lot of photos in Georgetown and Old Town. You can find her blog here https://www.thatjanebird.com/blog/ or look for thatjanebird on Instagram. You’ll not only see the charm of those locations but also lots of pumpkins, ghosts, and witches!

Eric, Florrie’s policeman manfriend, remarks that he likes a good ghost story and finds it remarkable that there is no scientific proof, and yet everyone seems to have a ghost story. Is that true? Do you have a personal ghost story?

This is a topic that I find fascinating. Many of us reason that ghosts and spirits in any form are nonsense. Other people swear they have seen ghosts. In my own family, people who didn’t believe in ghosts have changed their minds. I’ve had some odd mists show up on photographs. Those are long stories and not all that interesting except they weren’t on the photo before or after the one with the mist, and they were taken in locations that were connected to someone close to me who had died. It is odd that people around the world, in all cultures, have seen ghosts. And it is also strange that many of their stories sound similar.

What is the historical significance of the Maxwell carriage house?

It was once a real carriage house and part of the Underground Railroad. A tunnel where people could hide connects it to the mansion.

Yes. I imagine it depends on the amount of venom and the type of snake, but they can become delusional. 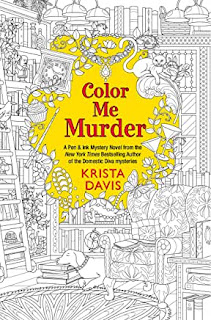 Mr. DuBois, Maxwell’s butler, normally stays in the mansion. But he suddenly trumps up reasons to stay at Florrie’s carriage house during the day, even though he isn’t a cat fan. Why has his behavior changed?

Mr. DuBois is agoraphobic and never leaves the property. He is fine outside on the grounds and in the carriage house. A big fan of true crime TV shows, he imagines murder everywhere. After a psychic held a séance at the mansion, he thought that a new ghost had arrived and remained in the mansion. Consequently, he did not want to be there alone.

Are there apps that enable people to make phone calls that appear to be from another phone number? Does it have to be a landline? Is this like phishing email?

I am sorry to say this is true. It’s hard to believe, but apparently, it can be done. I don’t think it has to be a landline, and it is sort of like phishing email. It’s ideal for pranks.

I went on a Halloween Ghost Tour in Leesburg one year. It was surprisingly spooky. Your characters go on one in Georgetown. Does Georgetown have a ghost tour as well or did you make that up?

I made this one up to suit the story. But Georgetown has been around for a long time and there are loads of ghost stories. Many of them are about historical figures. I’ve heard that the stone house has many ghosts!

If you are visiting the area, you can find ghost tours here. https://freetoursbyfoot.com/washington-dc-ghost-tours/

On the ghost tour, Florrie literally trips over another corpse. She also discovers the cemetery staff pulls a gag on its ghost tour visitors. What did they do?

Do you really want me to give that away? Let’s just say they made the ghost tour more fun!

Is the story about Lincoln true?

I wasn’t there, so I can’t swear to it. But that’s what they say! I have found several references to his behavior following the death of his son Willie. Interestingly, Willie died just about the time that methods of embalming were being tried, and he was embalmed. 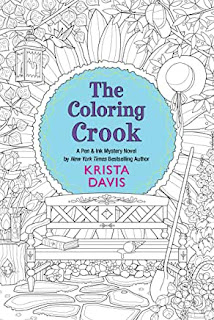 
I had no idea until I started to do research. His name is Prince Henry Charles Albert David Duke of Sussex (or Mountbatten Wales or Wales, apparently his last name is complicated).Whether sociopath or psychopath, it seems we all have had close encounters. But why is it that we feel like fools after we finally discover their true natures? They have to be more common than we’re led to believe.

Many people who are murderers or commit other crimes can be surprisingly charming. That aids them in eluding authorities or raising suspicion. Ted Bundy springs to mind. While we would like to think that we might recognize malicious people by their evil eyes or menacing expressions, there are those like Ted Bundy who don’t concern us until a pattern emerges.

What is next for Florrie, Frodo, and Peaches?

The next book in the Pen & Ink Mysteries is A Colorful Scheme and it’s all about writers! Frodo will be snoozing happily at home, away from the murder and mayhem. But Florrie and Peaches will be in the middle of a big celebration and the murder of an aspiring author.

Great interview, I am looking forward to reading this.

Delightful and I love the color the cover concept. I'm currently reading and enjoying The Diva Spices it Up and I'm looking forward to visiting Georgetown during Halloween.

Hey Krista -- what a fun story. Speaking of fun, I still look back with smiles at our speed dating joint session we had at Malice or Left Coast Crime (those details are a little sketchy).

So much fun, Krista! Nice to have you on the blog today. Congratulations on the new book!

Thank you, everyone! It's always a pleasure to be here.

Jim, we speed dated at Malice. Seems like ages ago and another time, but we made a good team!