What made you decide to write a book? By Kathy Manos Penn

Do other authors get this question? I hear it from friends, former co-workers, and folks I meet out and about. People who’ve known me for years learned long ago that I could write and were accustomed to my crafting corporate presentations and training manuals along with, in later years, weekly newspaper columns.

It’s the shift to writing fiction that surprised people. Heck, it surprised me. When I retired, it was an easy decision to publish a collection of my newspaper columns, and, with the encouragement of a former boss, a fun book based on blogs I co-wrote with my dog. He’s quite the wordsmith. Never in my wildest dreams, however, did I think of writing a “real” book.

Until … with the dog hard at work on book two, I met a marketing consultant. She interviewed me, read fifty pages of the dog book, and very politely told me it wasn’t worth the effort. She had a different idea. “Why don’t you write a cozy mystery?” she asked. My reaction?  “A cozy mystery? What on earth do I know about writing fiction, about coming up with characters, much less a plot?”

But I loved writing my columns and writing blogs with my dog, so I convinced myself a mystery could be fun—something to try in retirement. If it turns out I’m awful at this, then no harm done. Who was I kidding? I’m pretty much a type-A personality. I don’t do things in half measures nor take failure well, so it was never a lark. Thus began my cozy mystery journey.

I considered my likes and dislikes as I pondered where to start. As an Anglophile who had just taken a 3-week bucket list trip to England, choosing the Cotswolds as the setting was a no-brainer. My new consultant friend knew the cozy mystery tropes inside and out. I, on the other hand, had to look up the word trope.

Armed with the superficial knowledge she spoonfed me, I came up with the main character— Leta Petkas Parker, a career woman in her fifties, who loses her husband in a tragic accident. A year later, in a carpe diem moment, she decides to retire early and follow her life-long dream to move to the Cotswolds. She’s an avid reader who takes yoga, walks daily with Dickens the dog, and is known for her Greek cooking.

I based her and the other female characters on the smart, mature women I know, and I added the twist of Leta being able to converse with her pets. Writing the dialogue for Christie, the sassy cat, and Dickens, the happy-go-lucky dog, may be the best part of crafting this series.

I was halfway through book one when my friend asked, “So, have you thought about book two?” Of course, I hadn’t. And now I pinch myself daily because I can’t believe book five came out in September, and book six is with my editor.

The other question I get is, “How do you come up with ideas?” I struggled to answer that until finally, I had an aha moment and realized that I loosely follow the 5W+H method I learned in my corporate days. Who knew it would come in handy for writing fiction? Over and over again, I ask who, what, where, when, why, and how as I work through several steps.

Step 1: Jot down random ideas that flit through my mind while I’m driving, reading, watching TV, or waking up in the morning. At this point, I don’t force it. I just let things come to me. Those ideas lead to research and often a tumble down the internet rabbit hole. Trust me, I had no idea my first book—Bells, Tails & Murder—would involve a J.M. Barrie manuscript. I was simply researching something I’d heard about the Peter Pan playwright, and one thing led to another.

Step 2: Settle on the surround—my word for the setting. Will it involve a literary festival? Or a yoga retreat in Cornwall, as it does in Book V, Castles, Catnip & Murder? Because a book club meeting is always included, a book that connects to the plot is a must. The Once and Future King, for example, was the choice for Castles, and I had a grand time weaving bits of Arthurian legend into the story.

It was supposed to be a relaxing vacation. Now, this legendary location could be

hiding a killer in its battlements. 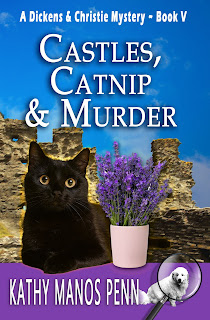 By the time I write the first line, my story may have nothing to do with the random thoughts I started with. And, because I’m a pantser, not a plotter, there’s no telling where my characters will lead me before  I get to the end.

No matter where I wind up, the one thing I’m sure of is that I’ll have a ball along the way. Ten years ago when I wrote my first column, I realized I’d discovered my passion. Little did I know that writing mysteries would be even more fulfilling—so much so that it’s difficult for me to take a day away from writing. Dickens, Christie, Leta, and the rest of the gang seem like old friends, and my readers tell me they feel the same way.  I guess that means I better start pondering the next plot! 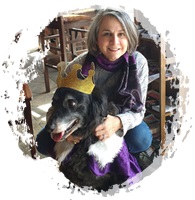 As a corporate escapee, Kathy Manos Penn went from crafting change communications to plotting page-turners. Adhering to the adage to "write what you know," she populates her Dickens & Christie cozy mysteries with well-read, witty senior women, a sassy cat, and a loyal dog. The murders and talking pets, however, exist only in her imagination.
Posted by E. B. Davis at 12:30 AM

It's great to find the kind of work you enjoy and share it with others.

I enjoyed your path to publication story.

What fun, sounds like a delightful series. Finding your passion makes all the difference.

So glad you found your passion! That almost always comes through in the writing. Sounds like a great combination of traditional and imaginative themes.

Thanks for sharing your writing story, Kathy. Your series sounds like a lot of fun!

This sounds like such a fun series -- another for my list. I love hearing how authors came to be.

Terrific tips, Kathy. Thank you. I plan to follow them when coming up with ideas for my fourth book. I need all the help I can get.