WAITING FOR AN AGENT? WRITE A SHORT STORY 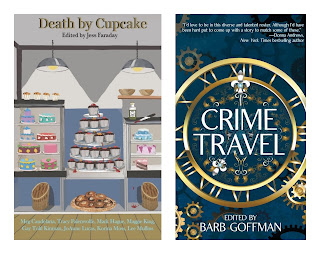 So you’re in the midst of the agent querying process, you’ve re-written your first chapter no less than eighty-seven times, and you’re getting carpal tunnel from hitting the refresh button on your email to check for agent responses. You have ideas for your next book, but you find yourself hesitating to start another big project, still invested in this current manuscript that has yet to find a home. Can I give you my unsolicited advice? Write a short story.

Crafting an intriguing story within the confines of a small word count is a great way to shift your focus and hone your writing skills. Short story authors are a little like magicians—there’s a lot of craft and preparation involved to entertain readers with what appears to be a “simple” story, but there’s nothing simple about it. It’s a worthy challenge, but don’t be daunted. If you’re not a regular short story reader, peruse the latest Ellery Queen, Alfred Hitchcock, or Black Cat Weekly mystery magazines or pick up a mystery anthology before tackling your own short story.

If you’re a writer motivated by publishing goals and deadlines, you can keep an eye out for writing contests or upcoming anthologies. As a member of Sisters in Crime (SinC), I often come across announcements for new anthologies in need of stories. Anthologies and contests often have a theme, which I prefer, because it gives me a place to start rather than spending most of my time trying to decide which idea might make a decent story. Another plus to submitting a story to a contest or an anthology is that a lack of publications or social media following has no bearing on how your story is judged. In fact, it’s a good way to get your first publication and bulk up your bio for those query letters.

While I was in the waiting phase of querying my first book, I saw a call for cozy mystery stories with cupcakes as a theme, titled Death By Cupcake. That sounded right up my alley, so I thought I’d give it a shot. My humorous story about a murder that occurs at a Little Miss Cupcake pageant set in the fictional town of Epping Springs—the cupcake capital of Florida—during their annual cupcake festival, was accepted. Not only was “Little Miss Cupcake” a fun story to write, but I’ve kept the characters I created in my back pocket, hoping I’ll have another chance to someday bring them to life.

While a member of the SinC Guppies chapter, I learned about Barb Goffman’s intended anthology that merged time travel with mysteries, titled Crime Travel. I’d never written anything in the realm of science fiction, but I approached it as a mystery set in another era and worked in the time travel aspect. My story, “On the Boardwalk,” which finds two unlikely best friends traveling back to the 1975 Jersey shore to change the fate of a missing brother, was accepted into the anthology. Although challenging for me to execute, I ended up grateful for the opportunity to sift through memories of my own childhood to write this story.

Whether the outcome of your short story experiment is something you want to submit for publication or not, you’ve spent your time writing, challenging yourself, and learning about your writing process. There’s no doubt your writing will improve because of it. And BONUS, you’ve no longer been fixated on something you can’t control—when you’ll hear back from those agents. Give it a try!

Are you a reader of short stories? Have you written any? Tell me about your experience.

You can read “Little Miss Cupcake” in Death By Cupcake, edited by Jess Faraday, available now.

You can read “On the Boardwalk” in Crime Travel, edited by Barb Goffman, available now.

Great attitude, Korina. My approach has always been to start writing the next novel, but I don’t write many short stories.

Congratulations on two short publications! Writing shorts are fun, and because they can often be drafted in a day or two, a wonderful way to cleanse your writerly palate or see if characters have what it takes to populate a longer work.

Congratulations on your shorts!

I usually write stories in batches, during January and August, to meet the usual deadlines.

What great advice—if you can write short stories. It's something I'd like to focus on when I have the time. Now I'm going to read your 2 stories!

Excellent advice. It never occurred to me that there were so many anthologies looking for submissions and that it is easier to break into them. Short story crafting is different and in some ways,more challenging.
Nice to see a shout-out to Barb Goffman. She is a fine writer.

Doing them in batches is a great idea, Margaret.

Tonette -- I'm in awe of Barb Goffman -- she's so prolific and all her stories are so different and wonderful. I wish I had the time to spend on writing more short stories, because I find them very challenging (but so satisfying if I'm happy with how they came out) and would like to get better.