An Interview with Veronica Bond by E. B. Davis

We had learned through terrible experience

that predators were found not only outdoors.

Actor Nora Blake finds her dream job when she is cast in a murder-mystery troupe that performs in an imposing but captivating old castle. When she stumbles upon a real murder, things take a nightmarish turn in this first book in an exciting new series.

Maybe it was too good to be true, but when Nora Blake accepted the job from Derek Corby, proprietor of Castle Dark, she could not see any downsides. She would sink her acting chops into the troupe’s intricately staged murder-mystery shows, earn free room and board in the fairy tale–like castle, and make friends with her new roommates, which include some seriously adorable kittens.

But something sinister lurks behind the walls of Castle Dark. During Nora’s second performance, one of her castmates plays the part of the victim a little too well. So well, in fact, that no one can revive him. He has been murdered. Not ready to give up her dream gig—or to be the next victim—Nora sets out to see which one of her fellow actors has taken the role of a murderous real-life villain. 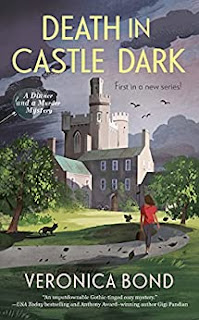 I had read this book a month before I wrote questions for the interview. So, while reviewing my highlighted passages, I found myself slipping back into re-reading the book. That says a lot about the author’s writing. Once I’ve finished a book, I rarely re-read.

Veronica Bond (aka Julia Buckley) started A Dinner and a Murder mystery series with this first book, Death in Castle Dark. Main character Nora Blake is an extremely likeable character. She’s an actress, but she can also sing and play the piano. She’s close to her family, who visit her at the castle. Readers come to know the entire family.

The co-owners of the castle, two brothers, Derek and Paul, share banking and financial skills. While Derek is the playwright of the dinner murder mysteries, Paul keeps the books and the troupe in the black. Derek’s dog, Hamlet, a part black lab/King Kong mongrel, also has walk-on parts in the plays.

When a murder occurs, Nora wonders if she made a mistake accepting the position. Solving the murder mystery proves she has what it takes be a sleuth in real life, not just on the stage.

Have you ever worked in the theater? Or are you a dinner murder mystery aficionado?

I have never acted professionally, but I had leading roles in three high school musicals, and those were experiences that left a lasting impression. When my husband and I were first married, we played a couple of those murder-mystery-in-a-box games with friends. We hosted a dinner party and everyone was assigned a role. It was fun, but a lot of work to prepare, and once we had children we never had time for things like that.  :) 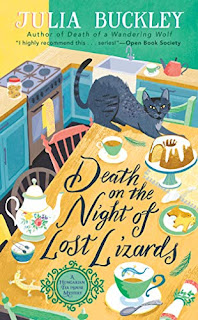 Where is the castle located? How far is it from Nora’s hometown of Chicago?

Castle Dark is in a fictional, rural town called Wood Glen, more than an hour southwest of Chicago.

How did the castle get there? How old is it?

The castle was commissioned just after WWI by Derek’s great-great-great uncle, Philip Corby. He made a fortune in steel after the war and indulged a desire to own a castle like some he had seen in Europe as a soldier.

What are the brothers doing to keep the castle afloat financially?

The castle has two main sources of income: the murder mystery dinners (which are expensive), and the occasional contracts they have with film crews who want to use the setting for a movie or commercial. So far that has kept the financial wolf from the door.

Nora seems close to her family. I’d never heard of a family who has their own chat room. Why don’t they just group text each other?

They are group texting, in a Facebook group chat for just their family. My family has one, too.

Why does fellow actor Connie want Nora to take the acting job at the castle?

Connie and Nora form an immediate rapport--one of those friendships that simply forms out of a certain favorable chemistry. And Nora does, in fact, take the job mostly because of Connie.

Nora describes herself as an introvert. Can actors/singers who entertain in front of audiences be introverts?

Absolutely! I would guess that a majority of actors are introverts. I think that introverts are drawn to performance because it’s a way to be someone else, someone more outgoing and exciting, at least for a short time. I’ve seen actors in television interviews who gave monosyllabic answers to all the questions, clearly shy despite their gregarious personality in the role they played. But I also see it in my students; some of the shyest students I’ve ever had tried out for the school play and surprised me with their ease upon the stage. But then again, I tried out for all my school plays, and I would describe myself as a classic introvert, from that time to this.

Why does Derek go from one extreme to the other on finances? He won’t light the staircase to the actors’ rooms but then he buys birdseed and treats for the squirrels.

These details are meant to highlight Derek’s eccentricity. He is a “creative,” and he doesn’t think or act the way other people do. He’s fun to write, though.  :)

You mentioned that Hamlet has jowls. So, if he is part black lab, is the other part blood hound? Is there another part, which is Bernese Mountain dog making him so big?

Well, there are jowls and there are jowls. The older I get, the more I notice my own. :) Seriously, though, I have a Black Lab, and his cheeks are very loose, so that when he relaxes they kind of hang down in a jowly way. He also drools up a storm. As Nora says in the book, no one quite knows Hamlet’s origins beyond Labrador. 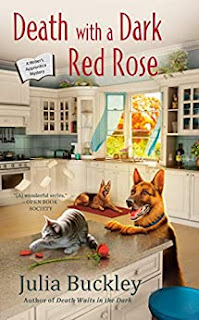 In the middle of the case, Nora adopts three kittens. Why would she do that? What are their names? Does she ever tell Dereck about her living contraband?

Nora is characterized as an impulsive person. She felt the need to keep the kittens safe, and suddenly she was stuck with them. I’ll keep their names a mystery since there is a moment of revelation in which the reader learns them. And by the end, Derek has learned of their existence.

It was interesting that you had more scenes involving Paul, who seemingly is at the periphery of the story. We get to know him better than Derek, who is more involved with the actors. Why?

Paul seems peripheral at first, but he becomes an important character. His genial nature makes him more approachable than Derek, who retains an aura of mystery appropriate to Castle Dark. But readers will learn more about both brothers as the series progresses.

Zana is an interesting character. She’s the cook for the troupe, but she is married and has ties to the community since she lives in the town and used to work for a bakery. Why does she need to “treasure hunt?”

Zana is an interesting and mysterious character who is devoted to family. Her grandmother taught her this little “game,” and she still likes doing it. It’s a throwback to her childhood and an homage to her grandma.

Why is Tim, another actor, passive aggressive?

Why is anyone?  :)  I wouldn’t say that Tim is passive aggressive most of the time. He has a couple of moments with Nora in which he seems like a different person but uncovering a character’s true self is always part of solving a mystery.

What is a naiad?

In Greek mythology, a Naiad is water nymph said to inhabit a river or waterfall. There is a fountain behind Castle Dark, and over it presides a statue of a Naiad who looks eternally at the water.

Nora’s teenage twin brothers are blood thirsty, but because of their attraction to violence they save her. How did they do that even though they weren’t at the castle during attacks on her?

Nora’s brothers are pretty standard teenage boys: they’re very physical, they love being loud and obnoxious, and they tend to be drawn to movie-style violence. They are also very smart. They love their sisters, although they don’t like to talk about it.  :)  When Nora moved to her own apartment in Chicago, her brothers made her a PowerPoint about how to defend herself. It was rather comical, and she laughed at it.  But later, when Nora is actually in danger, she remembers some of the good advice that her brothers had offered beneath the nonsense of their presentation.

What’s next for Nora?

Nora will be back in Castle Deadly, Castle Deep, the next Murder and a Mystery title. Life at the castle continues to be spooky and mysterious.  :)

How many series are you now writing? How do you do it and keep it all straight?

I’m actually on a little break right now. However, I have several books that just came out, one in the Hungarian Tea House series (which has received some lovely reviews from both Kirkus and readers), and the Castle Dark series. I have two other series which have ended (Writer’s Apprentice and Undercover Dish), but I’ll be self-publishing a new book in the Undercover Dish series this fall.

Juggling things while writing them all could sometimes be stressful, especially because I teach high school full time, but mostly it was fun, because writing is such a pleasurable escape. I’m convinced that if a writer enjoys the writing, a reader will probably enjoy the reading.

Thanks so much for having me on the blog!!

Veronica Bond is the pseudonym for Julia Buckley, a beloved author who has taught high school English for twenty-nine years. Her previous series include the Undercover Dish mysteries and the Writer’s Apprentice mysteries. She currently resides in Chicago, Illinois.

congratulations on your latest release. I look forward to reading it.

Thanks for sharing with us. I'm looking forward to investigating these books.