I received what's called a "first pass" from my editor at St. Martin's Press for my book Cheddar Off Dead. This is the stage where the publisher has formatted the manuscript, and I look it over to make sure there are no glaring errors. (Their copyeditor and proofreader do so, as well.) I am also writing up the cheese-forward recipes to be included that my main character Willa makes in the book. My deadline is September 20. The book is available for pre-order.

In Korina Moss's cozy series debut, Cheddar Off Dead, cheesemonger Willa Bauer discovers that her new home in a small Sonoma Valley town is ripe for murder... something here stinks to high heaven, and Willa knows it's not the cheese.

Miss Grayling, a character who appears in some of my short stories, is at it again. Her cat Arabella, who is fond of presenting dead mice and other treasures, has brought home a diamond ring. When Miss Grayling brings it to a local jeweler, she discovers it appears on a list of recently stolen items. Who would ever suspect an eccentric, elderly lady who lives in her deteriorating Victorian mansion of being a partner to burglary? Yet it is undeniable that she was in possession of stolen goods. Complicating the situation are two neglected children from one of the apartments next door. Miss Grayling, who has a healthy fear of authorities who may decide she is incapable of living on her own, sets about doing what she can to remedy the situations in her own, usually fatal, way.

I’ve just gone through my first editing phase of Dewey Decimated, the sixth book in the Haunted Library series that I write as Allison Brook. It’s due October 31, and tentatively scheduled to come out in September 2022. Two new characters appear in the book—the ghost of a man who has been murdered and can’t remember much of anything and a brash young investigative TV reporter who insists on solving the murder with Carrie.

Death on the Shelf debuts on November 9th.

My mind is awhirl with plotting ideas for Book Number Seven in the series.

I am incorporating the comments of beta readers in my sequel to Fatal Intent and hope to have it off to the publisher by the end of the month (hopefully before this is posted :-)) I'm starting to plot the third in the series of Dr. Kate Downey, a most unusual anesthesiologist who keeps running into murderous schemes she has to solve.

I've been busy promoting recently released Four Cuts Too Many in which Sarah Blair, who finds kitchens more frightening than murder, gets an education in slicing and dicing when someone in the culinary school where her friend teaches serves up a main corpse and Sarah soon discovers that there’s no time to mince words when it comes to finding the real killer. I also submitted the edits for Five Belles Too Many, a tale of five couples, including Mother Maybelle and George, participating in a television competition for the perfect Southern wedding. In Five Belles, which releases in June 2022, Sarah gets roped into being her mother's chaperone.

I just finished the final proofread of my fourth Endurance mystery, The Witch's Child. It's off to the formatter and will be out by October 15, 2021. Grace Kimball welcomes home her former student and daughter of a notorious woman who went to prison following a bitter murder trial ten years earlier in Endurance. Not everyone in town is willing to forgive and forget. I'll be editing Death in a Pale Hue (An Art Center Mystery) soon with Level Best Books, and then I begin writing the second book in that 3-book contract.

A Key West Kind of Death – Second in the Southernmost Secrets series.

Hank Wittie has put her medical career on hold to manage her family’s newly opened B and B in Key West. The director of the tourist board is found dead at the grand opening celebration in the poison garden he opposed. When his death is attributed to a berry found in the garden, and more deaths follow, Hank must use her medical knowledge and investigative skills to find the killer or lose her reputation and livelihood.

I’m working on the first round of edits for Argyles and Arsenic, book 5 in the Highland Bookshop Mystery series, where murder at a Scottish manor house leads to a poisonous game of cat and mouse – with the women of Yon Bonnie Books playing to win. The book comes out March 1, 2022.

At the same time, I’m madly typing toward the deadline (in three short weeks) for an as yet untitled book in Annie’s Museum Mysteries. The story involves photographs, developed from an old film, that provide clues for solving a mystery – or do they? I’m writing two of the projected twelve books in the series with the rest written by other authors. I’m writing them under the name Margaret Welch, which I chose because Margaret, protagonist in my Margaret & Bitsy mysteries, has always wanted to write books. Why a penname? To separate these books, whose characters and guidelines come from the publisher, from books that are wholly my own.

As Kate plans her future with Detective Inspector Tom Mallory, she is also helping her colleague Ivor Tweedy organize an upcoming auction in a seaside village on the Suffolk coast. Netherfield Sanatorium, an abandoned Victorian insane asylum, is being converted into luxury townhouses. Kate and Ivor have been asked to auction off a fine collection of antiques, including a fifteenth-century painting attributed to the Dutch master Jan Van Eyck. But when retired criminal inspector Will Parker is found dead, Kate discovers that the halls of the sanatorium housed much more than priceless art.

Kate is surprised to learn that Will Parker was her friend Vivian Bunn’s first boyfriend. They met in 1963 at a seaside holiday camp when, along with three other teens, they explored an abandoned house where two years earlier a local doctor and his wife had died under bizarre circumstances. Now, when a second member of the childhood gang dies unexpectedly—and then a third—it becomes clear the teens discovered more in the house than they realized. What was the deadly truth they found? When Kate makes a shocking connection between a sixty-year-old murder and the long-buried secrets of the sanatorium, she understands that time is running out for Vivian—and anyone connected to her.

As is usually the case, I’m juggling a couple of projects right now. I’m working on revisions to my next Zoe Chambers Mystery, which is due to my publisher in mid-November. I’m also in the rough draft phase of a potential new series. And by rough draft, I mean I’m swamped in the dreaded muddle in the middle but trudging onward.  Finally, I have Crime in the Country: A Zoe Chambers Mystery Anthology coming out October 5.

Curtains for the Corpse, a 2019 Daphne finalist, is in final revisions. When Lizzie finds a body at her carriage house renovation site and learns the college student last seen with the victim is missing, she becomes involved in the investigation.

Corniced to Death, a 2021 Claymore finalist, is a work in progress. When Lizzie finds twelve young women locked in the college conference center attic, she is determined to protect them while identifying who brought them to campus.

I'm excited about my next novel, Mimi Lee Cracks the Code, which releases November 30. In the meantime, I’ve turned in my draft of Death By Bubble Tea, Book One in my new Night Market Mysteries. It’s set to release in June 2022 and is about two opposite-personality cousins, who are thrown together in a delicious mystery, while working at a food stall in a Los Angeles night market.

Since the launch of the third book in my Laura Bishop Mystery Series, "Upstaged by Murder," in the spring, I have been focusing on interviewing mystery authors for our Writers Who Kill blog. It gives me the opportunity to read a variety of books in order to interview them. I'm also learning what I can about writing short stories so I can try my hand at that. Writing short sounds easier than writing a novel, but as other authors have found, it is a bit of a challenge. I've also taken advantage of several online conferences and participated with some online panels. Zoom has been a real blessing, keeping authors connected with each other and with organizations.

I’m seeking representation for a spinoff series (Niki Undercover) featuring the undercover FBI Special Agent who first appeared in Cabin Fever (Seamus McCree #3). I’m also working on the first draft of the next book in the Seamus McCree series. 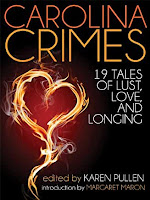 I’m revising a short story as per the editor’s direction for Carolina Crimes: 20 Tales of Rock, Roll, and Ruin. My short story is “Stevie and Keith for the Win.” Jenny is arrested for breaking and entering, assault, and theft when she goes to her not-quite ex-husband’s house to take care of their dog while he supposedly is out of town—not! The anthology doesn't have cover art yet. This is the first anthology, which I had a story in called, "Ice Cream Allure."


I am also trying to promote the Guppy anthology, The Fish That Got Away. My story is, “The Pearl Necklace.”

I have often thought it would be a great benefit to have a computer app or at least a paper map to figure out the answer to that question. But I don’t.

At the moment I am deeply into writing music. I have been singing with the intention of singing well for the past seven years. I feel like I have begun to learn how to learn to sing. For example, Latin words are pronounced differently when singing British Latin than when singing American Latin. It is helpful for me to think of my voice as a wind instrument. I am a saxophone. There are sixteen types of saxophones. I am a tenor saxophone and a baritone singer.

I found it fun to write my own lyrics to songs. The notes dominated. I had to match rhythm and find a way to put the emphasis on words that matter. Sending out a ringing “the,” “and,” or “very” did not work.

I took classes in music theory, which was like taking classes in a foreign language. Words that I knew took on a new meaning. Counting went up to eight. Rhythm is dividing and subdividing. Chords progress. They should anyway.

At this point, I plunk notes and figure out simple tunes. My teacher helps me add depth and character. And the left-hand notes on a keyboard. I am having fun. Some of the songs are actually singable.

Writing is an act of self-disclosure. But standing in front of an audience while self-disclosing, is quite another thing.

What a talented and ambitious group you are! And lovely to see the cover of Moonlight & Misadventure included (thank you, Kathleen!)

Thanks for the up dates. We're a busy group.

Fun to read what everybody's up to! A lot of good reading ahead.

I love finding out what my fellow WWK bloggers are writing. We ARE a busy group!

So much fun to catch up with everyone!

We are busy indeed.