If Trees Could Talk by Connie Berry 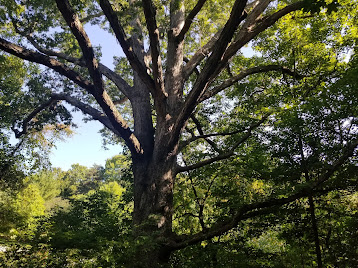 Twenty-one years ago when my husband and I bought our virgin forest land in rural Ohio, we fell in love with this huge old oak tree on the property. Because we didn’t want the construction of our house to damage the tree, we hired an arborist to make recommendations. He measured the trunk’s girth and told us our tree was approximately 250 years old. Think of the history that tree has witnessed during its long life. If it could talk, what tales would it tell?

We’re taking good care of the tree in hopes it will see another century or two. It’s certainly possible.

In 1700, the poet John Dryden published Palamon and Arcite, based on The Knight’s Tale by Geoffrey Chaucer. In that poem, Dryden wrote this:

The monarch oak, the patriarch of the trees, Shoots rising up, and spreads by slow degrees. Three centuries he grows; and three he stays, Supreme in state; and in three more decays.

A nine-hundred-year lifespan is impressive. 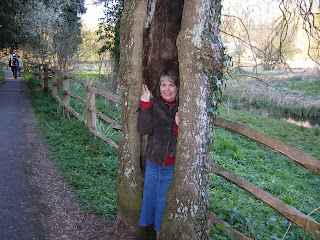 Britain is rightly famous for its ancient oaks. The largest native tree, the oak has come to symbolize the very essence of Great Britain. Oaks can reach almost 150 feet—equal to a fifteen-story building—and can attain a girth of more than 45 feet. Unfortunately, oaks are prone to fungal rot which creates hollow cavities. Here’s a photo of me taken several years ago near Lower Slaughter in the Cotswolds. This oak was a relative youngster. The giant Cowthorpe Oak in Yorkshire was already venerable in 1600 when William Shakespeare described it in As You Like It:

An oak whose boughs were mossed with age, And high top bald with dry antiquity. 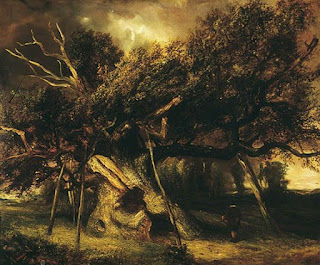 The Cowthorpe Oak (now gone) was said to once have held seventy people within its hollow cavity, including children perched on shoulders. Now all that remains is a stump, but acorns from that tree have been planted all over Britain and in such far-away places as New Zealand.

So far, ancient trees have played no part in the Kate Hamilton Mysteries. I really think that should change! Now all I have to do is come up with a plot.

Have you ever planted a tree? An old Chinese proverb says, “The best time to plant a tree is twenty years ago. The second best time is now.”

Do you have a favorite tree in your personal history—maybe a climbing tree in your childhood or one of the giant redwoods? Tell us about it.

The oldest tree on property I owned that I am aware of was a sugar maple that dated to the American Revolution. Just this past weekend we discovered a yellow birch on some property I recently acquired that has a diameter approaching 30". It dwarfed the other trees in the area and was the only yellow birch around. Given those woods have been logged for the last 150 years, how this one survived is a bit of a mystery, but I was delighted to make its aquaintance.

I planted a Forest Pansy Redbud to celebrate my grandson's birth, then remembered cicada season was about to hit. I acquired the proper netting and checked twice a day to make sure cicadas weren't slitting small branches to lay their eggs. I'll spare you the details of hapless cicadas who made it through the netting.

Lots of vigilance paid off and Jack's tree is thriving.

I have a gingko in my front yard. Love the gold leaves in the fall.

What a great tree! So glad you have preserved and protected it. I've planted many a tree - mostly citrus when I lived in Florida which were then demolished by the Department of Agriculture in the first citrus canker blight. None of the trees had canker, but canker was found within the 500 foot radius of my trees so I came home from work one day to find them gone and a pile of sawdust marking where they had lived.

Our current Florida property has a massive live oak. It sits right next to the house. When we called the arborist to advise us prior to having it trimmed, he said it was close to 500 years old. My skepticism must have showed - old yes, 500 years - hum - he brought us copies of old maps that showed the oak as a landmark. However old it is, I'm glad it managed to survive the various development surges. It's a lovely tree.

It always pains me when I see those old photographs of lumberjack standing proudly in a group on massive tree trunks or the pictures of a train with chunks of trees so wide that each portion takes up an entire railroad car. How long had they taken to grow to such dimensions, only to be cut down in a few days?

Charcoal burners (mostly to supply iron furnaces) clear-cut acres and acres of woods. The biggest ones on our property dated from just after that, hardly more than a hundred years old.

I hope we are beginning to show a better appreciation for our trees.

How I love trees and loved this essay, Connie. That pic of you inside the tree is adorable.
Our area has a few remaining old copper beeches, which grow in the most appealing way, with strong low branches that resemble elephants' trunks. These branches make them irresistible to children. Most survived hundreds of years of climbers, but were carried away by a freakish hurricane-like storm a few years ago. I'm still not over it!

I love this post about large trees. Yes, time to have one in your series.

Lovely essay, Connie. When I was curator at the history museum in Tennessee's oldest town, I occasionally took kids on a tree tour of town. One oak on Main Street was estimated to be 450-500 years old. The kids loved seeing how many of them it took, holding hands, to circle the trunk, and thinking about how much history the tree had witnessed.