A few years ago, my kids gave me a subscription to Acorn TV, which I used to watch the Agatha Raisin TV show. As a tiny drop of rain can turn into a mighty flood, this small taste of streaming television has led to me trying the offerings of many different streaming services. Thank goodness most give a one-week free trial. Here are a few shows that I discovered – with trigger warnings for the discerning mystery viewer. 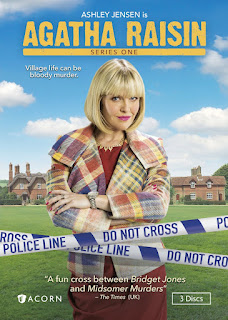 Agatha Raisin: If you’re a fan of the books, where Agatha is an insecure brunette former PR executive with little bear eyes who retires to the Cotswolds and tries, with little luck, to fit in, you might be disappointed in the new version. Ashley Jensen, who plays our Aggie, is a gorgeous blonde who is much more adept at navigating the social waters of Carsley than M. C. Beaton’s character. But if you simply pretend that it’s a new show called “Ashley Raisin” you’ll enjoy the talented cast, Cotswolds scenery, and snappy banter. 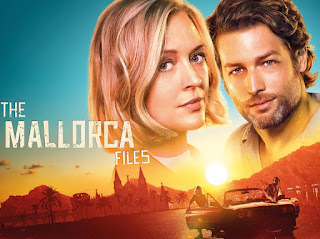 Mallorca Files: The scenery is the only thing prettier than the two leads. The mysteries, alas, aren’t nearly as attractive.

TRIGGER WARNING: I didn’t watch enough episodes to find any overarching problems, except that you may empty your bank account to buy tickets to this stunning island. 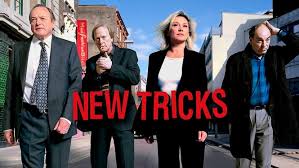 New Tricks: Following a drug bust disaster videotaped and shown on TV, a disgraced, but ambitious and talented female detective is given a last chance to save her career: run a cold case program staffed by similarly problematic police officers called back from retirement. The Unsolved Crime and Open Cases files offer meaty problems for the underrated crew of Sandra Pullman and “the boys” to unravel. This well-written BBC show was so popular it ran for 13 seasons. 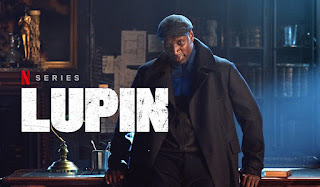 Lupin: Quelle surprise! I had a few complaints as plot holes and storyline issues you could drive a bateau mouche through popped up, but in the end I stuck with the show and am so glad I did. Inspired by the adventures of Maurice LeBlanc’s Arsene Lupin novels, gentleman thief Assane Diop takes on a French billionaire in an attempt to avenge his father’s death. (I can’t say more – no spoilers!) The actors’ charm and panache, the Parisian setting, and the way elements of the classic Lupin books are woven into the story are as delightful as an airy mousse au chocolat. It’s all a bit over the top, the characters have plenty of TDTL (Too Dumb To Live) moments, but there’s so much style and warmth on screen, you’ll be hooked.

TRIGGER WARNING: Those plot holes may have you tearing your hair out. Plus, my French is rusty, but I want to watch the untranslated version to see if all the F bombs are in the original. If this is a trigger for you, prenez-garde. 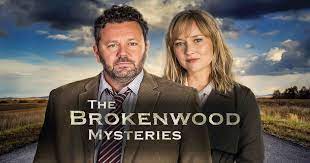 Brokenwood: My new favorite show. Some have called Brokenwood “Midsomer Murders transported to New Zealand,” but there’s a special charm to this show and its lead, Senior Detective Mike Shepherd, a laid back, country music loving wine aficionado. The New Zealand setting and culture are spectacular, and the mysteries are top notch. The special sauce for Brokenwood is the way supporting characters, even very minor ones, pop up in episode after episode. Trudy, Jean, Frodo…you’ll see what I mean.

What new shows are you watching?

My TBW is growing by leaps and bounds! I came late to the joys of streaming. Oh, there was Netflix and The Crown, of course. Then I checked out the offerings from my Prime subscription - Longmire, Downton Abbey, Bosch. I was hooked. Now I reel from one channel to another happily bingeing on Midsomer Murders and the Inspector Lynley Mysteries. So many shows, sigh - it's like going to a visual library.

No new shows, but I'm still working my way through Longmire and Bosch. Nearly done with both, so I'll need to find new things. Obviously, I'm not much of a television watcher.

Kait, that's the first mention of a "TBW" I've seen - I'm adopting! I'm working through Longmire, too. Love that show!

Jim, you have your own wonderful adventure channel to watch, right outside your door! Moose TV.

Sadly, I've been consumed by other things and my TV watching took a hit (other than news shows here and there)

I haven't been watching anything, but thanks to you I have plans for when I have time!

Love Lupin! And Balthazar, about a French police detective. We watched both in French with subtitles.

Currently watching Republic of Doyle which gives me a lift.

Loved New Tricks, Lupin and Agatha Raisin—both in books and on the screen. Isn't it great that we have so many wonderful shows to watch?

Reaching the end of a long Midsomer Murders "binge" (I never watch more than one show a day, and that not every day.) Thanks for the suggestions of where to go next.