EVERY LAST SECRET in paperback, at last 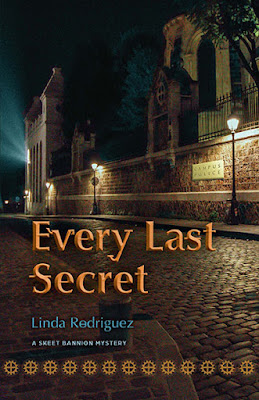 I'm excited to announce that on Tuesday, September 28th, the first of my Skeet Bannion mystery novels, Every Last Secret, will be re-released in ebook and trade paper format in a new edition with a new cover.
Pre-order here.
This is a thrill, especially, because readers have asked for a paperback version of these books for a long time, and my former publisher would not bring them out in that format. That was just one of the problems with my former publisher (not with my editor or publicist or any of the other people I worked with directly at that publisher, however--they were all terrific people for whom I still have lots of respect and affection). All three of my Skeet Bannion mysteries will be released with new covers in these new formats as a prelude to the launch at the end of the year of the 4th Skeet Bannion mystery, Every Family Doubt.
This book was originally to have been launched on September 5th, but problems in the supply chain have caused a delay. That's simply one of the many problems that has dogged this reissue of the first of the Skeet Bannion books.
I would like to mention for all the writers in our audience that this could not be happening were it not for my agent's diligence in insisting on clauses in my contracts that would revert all rights to me if my books went out of print in paper form. She even took on revision of the first contract I had signed with them before signing with her, taking a hit in money for both of us in exchange for inserting the same clauses--without which Every Last Secret could not be appearing now.
And sure enough, they let my books go out of print in paper without telling me, but they continued to reap the profits of selling my books in e-format, until a bookstore owner let me know that they had been told they could not get my books, because they were out of print. My agent got right on the publishers and forced them to revert all rights to me. Simply a reminder of why it's important to make sure that all of your contracts allow every form of your books to revert back into your hands the moment they stop making your hardcopy books available for sale, as well as a reminder of why a good agent is worth her weight in gold.
This is the book that first introduced Skeet Bannion, Cherokee campus police chief in a small river town and former Kansas City, Missouri, homicide detective. Skeet has left the big city and come to this bedroom community to escape her drunken and disgraced policeman father and her ex-husband, who refuses to give her up. She's tired of the grim toll that being an urban homicide detective has taken on her and is looking forward to a more peaceful existence in this quiet, little town.
Still, murder happens everywhere, and when it happens in her town and on her campus, Skeet moves back into the investigative mode and obsession with justice that made her one of the most successful big city homicide detectives and the highest ranking woman in that police force before she resigned. No one kills someone on her watch and gets away with it scot-free. Little does she know that this case will change her entire life.
I hope the many fans of these mysteries will enjoy this peek at the new cover of the first of them. Keep an eye out for the new edition of Every Last Secret in paperback for the first time, coming Tuesday, September 28th.

Linda Rodriguez's 12th book is The Fish That Got Away: The Sixth Guppy Anthology. Her 11th book was Fishy Business: The Fifth Guppy Anthology (edited). Dark Sister: Poems was her 10th book and a finalist for the Oklahoma Book Award. Plotting the Character-Driven Novel, based on her popular workshop, and The World Is One Place: Native American Poets Visit the Middle East, an anthology she co-edited, were published in 2017.  Every Family Doubt, her fourth mystery featuring Cherokee detective, Skeet Bannion, and Revising the Character-Driven Novel will be published in 2021. Her three earlier Skeet novels—Every Hidden Fear, Every Broken Trust, Every Last Secret—and earlier books of poetry—Skin Hunger and Heart's Migration—have received critical recognition and awards, such as St. Martin's Press/Malice Domestic Best First Novel, International Latino Book Award, Latina Book Club Best Book of 2014, Midwest Voices & Visions, Elvira Cordero Cisneros Award, Thorpe Menn Award, and Ragdale and Macondo fellowships. Her short story, “The Good Neighbor,” published in Kansas City Noir, has been optioned for film.

Yea! Just pre-ordered. I had looked for the Skeet books in the past and been unable to find them, now one will be arriving on my Kindle soon.

I made Skeet's acquaintance several years ago, and I'm glad that this re-release will mean that many other readers will, too. A hard earned victory, for sure. So glad your agent has been so firmly in your corner!

Kait, thank you, thank you. Those are the most welcome words any writer can hear. I am fortunate that my husband was a long time University press publisher and now has his own small press, so I have a publisher who is not only knowledgeable but firmly on my side.

Thank you, Margaret. Yes, it has been. It's been a long hard journey. I've been grateful for the support of friends like you.

Shari, yes, a bad agent is worse than none, but a good agent is absolutely priceless, and mine is not only one of the best, but she's a good friend, as well. She has continued to believe in me, even as I have been unable to write or publish, because of serious health issues and the pandemic.

I hope this very positive event is a step on your journey to improved health and a reawakening of your publishing career.

Are you planning to re-release all the Skeet books?

Thanks so much, Molly.

KM, yes, we will release all of them with new covers in e-format and paperback. After which, we will publish the brand new fourth in the series, Every Family Doubt. Although that one keeps getting pushed further and further back because of problems related to the pandemic and my own health issues.

Wonderful cover! I've loved all three of the books in the series so far, albeit in hardcover, so I'm looking forward to buying the fourth book when it comes out! Highly recommend this series to anyone who hasn't started it yet.

Thank you, Debra. I'm so pleased that you like the books.