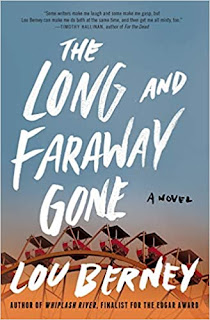 Lou Berney’s award-winning fifth book, The Long and Faraway Gone, was published in 2015. Kirkus Review termed it “a mystery with a deep wounded heart.” Berney’s language is subtle and lyrical, but not as lushly poetic as the narrative voices of James Lee Burke and Dennis Lehane. His dialogue reflects the Oklahoma City setting, and his setting descriptions are both emblematic of small-town America and unique to Oklahoma:

“Stockyards City drew a few tourists, but is was also a working livestock market, gritty and authentic in the way Bricktown, with all its frat-bars, wasn’t. Down here you could buy a wide-brim Stetson at Shorty’s Caboy Hattery or, on auction days, a few hundred head of Angus.” (p.302)

Berney bases his dual narrative on two true incidents in Oklahoma City: five teenage employees are murdered during a restaurant robbery, and a few weeks later, a young woman vanishes from the state fair without a trace.

In The Long and Faraway Gone, Wyatt, a Las Vegas-based P.I., agrees to make a trip to Oklahoma City to assist a woman fighting harassment and threats concerning the live music venue she recently inherited. Wyatt bears emotional scars after surviving a mass shooting during his adolescence twenty-five years earlier. While he investigates who might pose a threat to the music venue, Wyatt repeatedly visits the movie theatre and adjacent parking lot where he almost died as a teen. He has survivor’s guilt, and feels compelled to solve the movie theatre robbery and killings. “Wyatt didn’t know which side of grief was worse. The feeling that these people had always been in his life and were now gone or the feeling that they’d never really been there at all.” (p.300)

Meanwhile, in a separate narrative, Julianna, an Oklahoma City nurse, is determined to discover how and why her older sister, Genevieve, disappeared from the state fair during her childhood. She, too, has survivor’s guilt. “The landscape of memory was like that. Sometimes the near seemed far, far away, and the faraway was right beneath your feet.” (p.57)

Curious about the title of the book, I checked lists of song titles and found three called “Long Ago and Far Away,” by James Taylor, Bob Dylan, and Kern and Gershwin. None of the lyrics match Berney’s theme of “faraway gone.”

Though Wyatt and Julianna’s investigations periodically intersect in the book, the two characters independently risk their lives to learn enough about the twenty-five-year-old crimes to start their journeys towards acceptance and closure.

Readers and writers, have you read or written a book about memory and survival?

Always happy to hear about good reads I missed when they first came out! Gives me a chance to investigate.

I was just going to write "Love your reviews, Margaret," and now I see that Susan feels the same way. You do a great job.

Sounds like a wonderful book, Margaret. What a great review! I wish I could call the books I have read about the themes of memory and survival to mind, but they escape me. I know one was a Harlan Coben book. Maybe another commenter can provide the title.

Kathleen, Susan, Molly, and Kait: Berney's book is about the aching awareness of how individual characters deal with traumatic memories. It's subtle, which gives it an even better punch.

so glad to see your review. The book has been on my tbr bookcase... it may have to be moved to the night-table.

Marilyn and Debra, I hope you enjoy reading it.

A fabulous review of a fabulous novel. It's the language--lyrical yet understated that turns this compelling plot into a story that sticks with the reader long after the final page.

Margaret, this is an excellent review of a wonderful and haunting book.