Shaking Off the Rust by Annette Dashofy

After nearly two years of being holed up, limited to Zoom and Crowdcast “appearances,” I took part in my first big in-person event last weekend.

I was a nervous wreck.

I’ve been out in public a few times. I interviewed my pal, Liz Milliron, at Mystery Lovers Bookshop for her new release in August. I taught a writing workshop at a local library. I set up a table at a small first responder community day event. All were fun. I remembered how much I loved seeing smiling faces (larger than the thumbnail size of Zoom squares) and hearing laughter and answering questions asked out loud rather than typed into a chatbox.

Last weekend, though, was the Festival of Books in the Alleghenies, and I was their keynote speaker at the Friday night fundraiser reception. The foundation that supports the festival was raising money for children’s literacy. The reception was held in an art museum. Classical piano music accompanied wine and hors d’oeuvres.

However, it’s been a while. My public-speaking skills were rusty. Normally, the nerves set in about an hour before I’m scheduled to step up to the mic and dissipate as soon as I start talking. This time, anxiety set in a couple of days prior to the event, growing as the evening approached. As we gathered in the museum, I considered a glass of wine to soothe my nerves. Wisely, I did not give in.

I’m a cheap drunk. One glass, I’d have been slurring and/or snoozing my way through the speech. 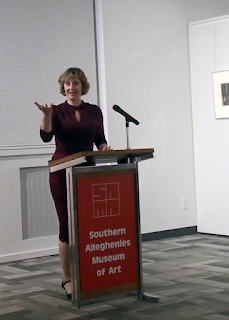 Thankfully, the gentleman who introduced me did a great job of warming up the audience. As usual, the nerves vanished as soon as I started talking. The real, live, faces in the crowd smiled back at me, laughed at the right moments, and appeared engaged in what I was saying. Even better, several audience members came up to me afterward to ask questions or tell me how my experience mirrored their own.

Looking back, it was a wonderful evening. And the festival the following day was wonderful as well. 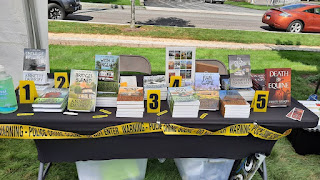 I had one more speaking gig there—I did a short reading from my newest book. But those words had already been written. All I had to do was put on my glasses and follow the script. 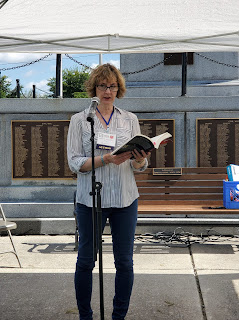 Overall, it was awesome to get out in public again, to exercise my public speaking muscles, and to not have to worry about my internet crashing in the middle of a Zoom meeting.

What about you? Have you been able to use your face-to-face people skills yet? If so, did they feel rusty?

Email ThisBlogThis!Share to TwitterShare to FacebookShare to Pinterest
Labels: Annette Dashofy, Festival of Books in the Alleghenies

You look awesome, Annette! I'm going to dust off my skills at a big public library in Maine on Tuesday. Not a keynote, not at an art museum, and I'm not nervous yet...

I survived Killer Nashville wearing a mask, socially distancing. It was tough to be friendly and engaging.

Sounds like you are back on track once again.

I did two events at our local library this summer -- one on crossover mysteries and the other an introduction to birdwatching. Both were shortly before the delta variation started to ramp up. I have a joint booksigning at a semi-local bookstore next week, about which I am a bit nervous as delta is running wild in our neck of the woods.

Oh, Annette, sometimes I am sorry I live in the far reaches of Maine! I would have loved to attend and cheer you on.

No personal appearances for me yet. I'm working on stretching my marketing muscles before I plan anything and, oh yeah, getting a book out :)

Jim, no matter what you decide--stay safe.

There is definitely an internal struggle between wanting to engage with friends and readers...and wanting to protect ourselves from Covid. I keep hoping it will be under better control by spring. (I've been saying that for a couple of years now.)

Annette,
I'm sure you did a wonderful job. And what an honor! Love the photos!

Congratulations on your successful re-entry, Annette! I'm beginning to poke my head up, but haven't gotten farther than that. I'm proud of you!

I'm glad it went well for you, Annette. You look wonderful, and I'm sure you sounded even better.

Thanks, everyone. Marilyn, yes, it was quite an honor.

I'm so happy you were able to do this. I've seen a few posts recently from writer friends who are finally getting to do some in-person readings. At least the excitement (hopefully) outweighs the nerves!

Definitely, Korina. And the best part is always talking to attendees after the speech.

Brava! Well done! I am hearing from storytelling friends that they've gotten to do some in-person events again.
. . . I'm with you on alcohol avoidance also. A friend says he always waits until after a performance because it makes him think he'd more witty than he really is. ;-)

Annette, you are the very picture of poise, beauty, and competence here! I knew you'd be great.

Thanks, Mary and Kathy.

And, Mary, I totally agree with your friend!