Once upon a time I had three children who married and had children of their own. Now I have eleven grandchildren. I hadn’t thought I’d have such a bonanza, but four of them came as twins to my older son and his wife. Yes, two sets. That adds up quickly. Once they were old enough to talk about books, I started asking them to give me words to use in my mysteries. They have since spent time figuring out which words will give me the most trouble in the setting of a small Illinois town. The harder the better, like “tundra.” Now they’re able to look up words in dictionaries, so I get things like “ubiquitous.”

Recently, I asked the four twins, ages 10 and 13, to give me words to use in my upcoming Endurance mystery, The Witch’s Child. Thinking caps went on, giggles ensued. What could we come up with to fool Grandma?

Once the book was done, I mailed them a letter about how I used their words. Being a former teacher, I had to ask them questions, of course. Here’s what I wrote:

Although you tried very hard to come up with words I would NEVER be able to use in my new mystery, I found a way to use them. Better luck next time.

The Witch’s Child is about a group of characters who have Scottish names: Fiona, Sybil, and Rowen. The cat on the cover has green eyes, and her name is Skye. She’s named for the Isle of Skye.

Do you know where the Isle of Skye is and what country owns it? 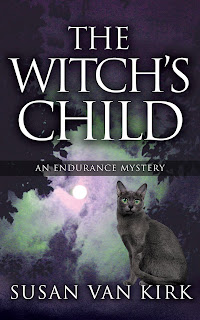 Camille, you wanted me to use your name. So I made you “Camille Whitacre,” a very nice college girl who runs a podcast where she interviews people who could turn out to be the killers. She is very smart and does a great job with her interviews. Your father told me I couldn’t make you a killer, a victim, or a mean person. So you are a podcaster. A nice podcaster.

Josephine, you wanted me to use “Niagara Falls.” That was very sneaky of you. How can you have Niagara Falls in smalltown Illinois? I managed it, thanks to my detective’s black and white cat named Eliot Ness. While two of the main characters are planning to discuss a murder, one of them thinks Eliot Ness shouldn’t hear about it. Here’s what it says in the book:

“About this time, Eliot Ness walked into the kitchen, and Grace looked at Jeff. ‘Probably not for baby’s ears.’ She scooped up the cat and took her to the family room, turning on the television to a documentary on Niagara Falls. ‘Here, Eliot, enjoy!’”

Bonus Question: Do you know who the real Eliot Ness was?

Ryan used an equally despicable word to make me think. He wanted me to use “rhino.” Fortunately, Eliot Ness came through again.

“Later that evening, Grace peered through her mail. Lettie had dropped it on the dining room table. Eliot Ness was watching ‘Animal Planet’ on the television in the family room. He was fascinated by a show on rhinos.”

Finally, Wade wanted me to use “wade” as a verb. Clever, Wade. There is a judge in the story whose office is ransacked by people looking for something. Grace and her friends must clean it up. This is what one of her friends says:

“‘How should we wade through all this?’ Deb O’Hara posed her question to Jill and Grace as they stood in the living room of Judge Powell’s house staring through the open office door.”

You’ve done a great job of keeping your grandmother’s brain functioning. Thank you, my dears. For the next book, I’ll check with your cousins to see what words they can use to fool me. In the meantime, keep reading.   Love, Grandma Sue

If you’re a writer and have grandchildren, this is a wonderful little exercise to talk with them about words. Your turn!

Gosh this is such great fun! I want to use this idea somehow :-) Congrats on the new release, Susan.

Great idea! I'll busily acquiring books for my grandson Jack and I'm sure I'll invent a little boy character based on him.

Easy to use for grandchildren, children, nieces or nephews.

A great which will both engage the children in your life and work, and stimulate their curiosity and word skills.

I love this idea! What fun. A special bond between a grandma who's a writer and her grandkids.

I love this idea! And how much fun for them.

What fun! Let us know if they ever stump you - that would be quite a coup!

They obviously get their clever and diabolical genes from you! I love this idea, Susan.

Shari, I learned never to say "never" when I was raising kids. Thanks, Vicki. Try it, even if on the neighbor kids. And Molly, I will never let them read this blog because it might give them the idea to use "diabolical."

I see a lot of words just in these comments that they might try to stump you with. Hats off to a great idea! Love that your grandkids are so involved. One of mine asked me if I just sit at my desk and scroll through Facebook all day. Not sure where he thinks the books come from!

You're such a good grandma! How fun for them, and for you.

Thanks, Judy and Kaye. I try. They live so far away that this is one of the things I can do. Not sure they think I scroll through Facebook all day, but I do think they have no idea how hard it is to write a book. So this is fun without telling them about all the slogging through the middle.