Happy Anniversary to My Hometown Favorite 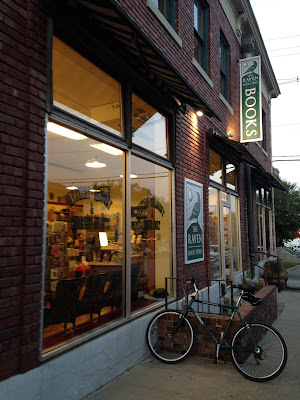 This week, I want to give a shout out to the Raven Book Store in Lawrence, Kansas, on the occasion of its 30th anniversary.

When Borders came to town twenty years ago and built a huge (by comparison) store half a block away from the Raven, there was much trepidation. Could the little store survive in the face of big competition? Short answer: yes. Borders, however, closed as part of corporate bankruptcy proceedings six years ago.

The Raven, which celebrated its anniversary with a weeklong series of parties, readings, and special events, is a tremendous supporter of local authors and the mystery community, even relative unknowns like me. When my first story appeared in an anthology, the Raven ordered copies, indulged my squeee-ing over the display at the counter, and even took my photo for me. 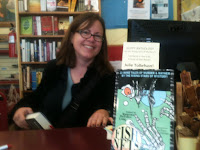 Last year, the store invited me to participate in one of its more-or-less monthly Big Tent events featuring local authors reading pieces of their work, from poetry to fiction to memoir and other nonfiction.

The Raven is also the sponsor of a book club that I joined by accident. Author-friend Diana Staresinic-Deane (Shadow on the Hill) was scheduled to speak, so I dropped by to support her only to find that she was speaking to a book club rather than the public event I expected. I joined that night and have been happily reading and discussing a wide variety of books with the Last Wednesday Book Club ever since.

I can’t imagine our town without the Raven. It’s vital to our quirky, thriving literary scene. My everlasting thanks to the store and the people who make it special.

What’s your favorite local bookstore?
Posted by Julie Tollefson at 12:00 AM

It's wonderful you have such a resourse.

Alas, for me there is no local bookstores. A used bookstore just started up about 30 miles from here. They have limited hours, so I haven't had a chance to determine whether they also have new books.

Treasure your local bookstore. We have a local chain 15 minutes away that does all the author visits, but it's not the same.

The only thing that could resemble my local book store, One More Page books of Falls Church, is almost 20 miles away. It too is tremendously supportive of local writers. Sadly, the bookstore that was close to my home was put out of business by a large chain book store, which itself went out of business a few years later. A story too often repeated.

I'm delighted the Raven is still going strong. So many book stores I loved are gone.

We have a mystery book store in Mechanicsburg, unsurprisingly called the Mechanicsburg Mystery Book Store. It's a bit idiosyncratic but delightful. It holds an annual one-day conference, Murder as You Like It, that is well worth attending. This year, I unfortunately had a conflict and could not attend.

KM - Sounds wonderful! I'll have to keep an eye out for Murder as You Like It.

Oh, all of you who don't have a local bookstore are breaking my heart! My fantasy is that I win the lottery and open a bookstore/coffeshop/bar (and my husband would add pet store) and never worry about whether it makes money.

Hi Julie, the Raven sounds great! I have Bank Square Books not too far away in Mystic, CT. They do author events and are just fabulous. I try to buy there whenever I can, even though I know it is cheaper on Big Soulless Internet Company. We have to treasure our local indies.

You are lucky to have a books store like that. The only local bookstore I have is one that mostly sells used books or ones the owner ordered to read and then put on her shelves. She has a huge amount of books and sells mine too. I often donate books for her to sell. The only other bookstores that sell new books are each about thirty miles away from where I live.
We used to have a Borders closer, but they went out of business.

Shari - I always try to buy local, too. It's hard sometimes, knowing I could save money if I gave in to the BSIC, but I feel like I'm doing my part to keep my favorite store in business. :)

Gloria - How wonderful that you have a store close by at all and that she sells your books!