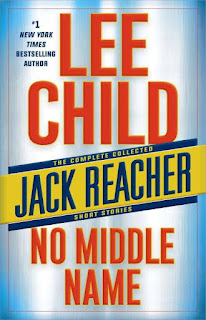 During our last move from Atlanta to Cincinnati, our van driver was Larry, a military brat who relished his life on the road, transporting families to new posts. Larry grew up on an Army base near Frankfurt and told me that by age eight he traveled the city on public transportation.

"You sound a lot like Jack Reacher. Ever read his books?” I asked him. Larry jotted down Lee Child’s name as he took notes about my kids’ science project show boards for his own children.

I know what I’m getting in a Jack Reacher novel: a static character who moves around the country, righting wrongs as he, by chance, stumbles into situations. Reacher is a retired Army major who served with the Criminal Investigation Division for thirteen years. He owns the clothes on his back and a folding toothbrush. His pockets yield an expired military ID and passport, plus a wallet with a current ATM card.

As a mother, I wonder how I would have raised a son like Reacher. His older brother, Joe, is a smart, introspective problem-solver.

In “Second Son” (p.75) his father has this passage: “His second son was a whole different can of worms. The kid was going to be huge. He was going to be an eighth of a ton of muscle. Which was a frightening prospect. The kid had come home bruised and bloodied plenty of times, but as far as Stan knew he hadn’t actually lost a fight since he was about five years old. Maybe he had never lost a fight. He had no trigger, either, but not in the same way as his big brother. Joe was permanently set to safe, and Reacher was permanently jammed wide open on full auto…The smart money brings a gun to a knife fight. Reacher brought a hydrogen bomb.”

His parents refer to Jack as just “Reacher,” and recognize his cunning and shrewd ability to size up the facts and act upon them. Reacher is a big kid, who grows up street fighting at a string of Marine bases where his father is stationed around the world, before he follows his brother to West Point.

In “High Heat,” a teenage Reacher spends the night in New York City during a blackout and stumbles across the Son of Sam serial killer. Reacher identifies what kind of gun the killer carries, his approximate age, and military experience, and an FBI agent relays the information before she dies.

Reacher is ordered to appear, under the guise of a black ops sniper, at a Senate appropriation hearing in “Deep Down.” He identifies which of the four female Army officers is a double agent, and evades execution by her embassy hit squad.

My favorite story is “Everyone Talks,” narrated by a bright, newly-minted female police detective. Reacher is in the hospital ostensibly recovering from a gunshot wound. He gives the police the name of the crime lord running a protection racket, who is subsequently arrested and charged. But the crime lord denies shooting Reacher, who disappears from the hospital, the doctor insisting that he hadn’t been a patient. No records exist. The detective ends the story:

"I pictured the Greyhound depot at midnight. A tall figure getting on a bus. The bus rolling out. No bags, no schedule, no plan.” (“Everyone Talks”, p.333)

Reacher is a ghost, an enigma, a man who was never there.

The last story in the collection, “The Picture of the Lonely Diner,” refers to Edward Hopper’s painting Nighthawks. “So you’re the redhead,” he tells an FBI agent enforcing a road block near a New York City park. “I’m the guy in the hat with his back to us, all alone… I’m going to take a walk. Like a First Amendment thing. Meaning you’re going to stay here. Like a smart tactical thing.” (“The Picture of the Lonely Diner”, p.416)

In the story, Reacher talks to a man sitting in a park who is under FBI surveillance after giving a Russian agent American intelligence. The man has the choice of accepting Reacher’s protection until he can surrender or be killed. His choice. 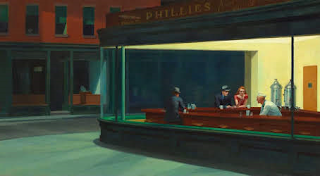 Reacher rights wrongs and seeks to protect people, sometimes with the cooperation of law enforcement or military police. Then he makes his way to the edge of town and holds out his thumb, hitching a ride to an unknown destination and his next problem.

The stories fill in Reacher’s backstory, particularly his relationships with his parents and older brother. They range from the clever, with diabolical twists, to what Reacher would consider maudlin Christmas stories. They were written after Child had published his first three Reacher novels.

Thanks, Margaret, for introducing me to Jack Reacher. I haven't read any of the books, and my only familiarity with him came from reading comments online about how unsuitable some people thought Tom Cruise was for the part.

In my manuscript, I make references to some of my favorite characters from other books, such as, "I wonder what Anne Perry's Hester Latterly would do in this situation." It's fun including a reference to characters I love.

I enjoyed the book. It gave a picture of the hero as he was growing up.

After reviewing this blog, I decided to try him. When I was at a library sale in Benicia in California visiting my daughter, I found the first book in his Jack Reacher series, and started reading it on the plane and when I got home. My only problem with it is it's hard to put down so I'm losing some sleep over it. I've heard of him before, but your blog made me want to try him.

Grace, I think about memorable characters in certain situations, too. What would Vera Stanhope do?

Warren, I enjoyed the stories about Reacher's childhood and young adult life more than the books.

Gloria, I enjoy a Reacher novel from time to time, particularly when I'm traveling. I'm currently reading Night School, which takes Reacher to Europe on an intelligence mission in the nineties.

I haven't read any of these short stories, although I have read some of his work. It is gripping.

I love short stories, and I'm going to have to look into these.

I do enjoy seeing familiar characters from series appear in short stories and novellas. Seamus McCree has appeared in one Novella (Low Tide at Tybee) set after the latest novel I’m working on, and several short stories—the published ones are interspersed between novels in timing. One that is still a WIP is set after the planned series novels.