It's In Their Stars 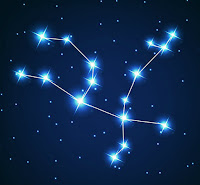 There is a phenomenon in astrology called the Saturn return: an astrological transit that occurs when the planet Saturn returns to the same place in the sky that it occupied at the moment of a person's birth, roughly 29.5 years into their lifetime. It’s a time of reckoning, of karma and consequence, and its effects can last for over a year.

In the first book in my Tai Randolph series, I introduced Tai, my narrator, right smack dab in the middle of her Saturn return. She's tipped over that edge now in the sixth book (the upcoming Necessary Ends), but is still mired in the transitional chaos, still struggling with the upheavals in her life. By the end of this book (out in April!) she makes a choice that rewrites her understanding of herself in a significant way. Pure Saturn return stuff.

This isn't the first book for which I've employed astrology as a developmental tool. Way back when I first started thinking about my characters, I created their natal charts, which are celestial maps that show the position of the sun, moon, and planets when a person was born. To make these charts, I used a very basic computer program that came with my favorite astrology book—the perfectly named The Only Astrology Book You’ll Ever Need—but the Astrolabe site offers a free version of the same. And the information I learned, even if very basic as astrological interpretations go, has proven quite helpful.

My protagonist Tai Randolph was born on March 21st.  That makes her an Aries sun sign—fiery, aggressive, energetic. It's where she gets her recklessness too, and her competitive streak. Her moon is also in Aries, which gives her a double dose of that head-first, all-systems-go, Ram energy. Her rising sign, however—the sign that was overhead when she was born—is Sagittarius the Archer. No accident that the first tattoo she got was of a flaming arrow in a flaming bow. Here is where we see Tai's independence, her philosophical streak, and her love of the outdoors.

Her partner in all things both romantic and crime solving is Trey Seaver—his birthday is September 17th, which gives him a sun sign of Virgo, with all the caution and reservation and love of order conveyed by that sign. It's where he gets his brain power and his overly analytical mode of operation. His rising sign is Taurus, which bestows strength and calmness and deliberation to his nature. And his moon sign? Capricorn—serious and practical, with a strong sense of duty. All three of these are earth signs, a combination that can make him spectacularly and aggressively stubborn, but also faithful and trustworthy, with a good head and grounded personality.

What keeps these two characters from butting heads to the point of mutual destruction? They both have the planet Venus in the sign of Leo, a fiercely loyal and ferociously passionate sign. Tai and Trey each have a fire heart, and as the saying goes, fire calls to fire.

I'm no professional astrologer—tarot is my divinatory tool of choice—but I do have an amateur's love of the stars and their celestial mysteries. If you'd like to learn more, visit your local bookstore; there's plenty of material to get you started. Or better yet, consult a professional astrologer and get your own birth chart done. It's an illuminating process no matter who you are, even if you happen to be a fictional character.

*     *     *
Tina Whittle writes the Tai Randolph mysteries for Poisoned Pen Press. The sixth book in this Atlanta-based series—Necessary Ends—is scheduled for an April release. Tina is a proud member of Sisters in Crime and serves as both a chapter officer and national board member. Visit her website to follow her on social media, sign up for her newsletter, or read additional scenes and short stories: www.tinawhittle.com.

I read my horoscope in the Sunday paper every week. Does that count?

Congratulations on your upcoming release.

Tina -- it hadn't occurred to me to do my character astrology charts. next time I need to do a long procrastination, now I know what to do!

Fascinating how you tie this into your novels! I'm sure it helps with character development.

Margaret, I have discovered that the newspaper horoscopes are more for entertainment than actual astrological information. But I'll give you credit for that.

KM, I need all the help I can get with my characters. This is an excellent tool.

And Jim, we need to cast Seamus' chart. I am sure it is a very interesting one. I can't wait to see it.

Have fun, Holly! And you are very welcome!

Fascinating stuff and what a cool tool for character development.
I cannot wait to do my chart - I'll have to ask my folks about my birth time because I have no idea.

So cool. I did charts for my main characters in the Hayden Kent series and was surprised at some of the discoveries. I had mine done years ago by a professional, but like you, the Tarot is my weapon of choice.

Interesting pot. and I was SO happy to see the back side of my first Saturn return. The second was more interesting.

Very interesting Tina. I have to admit, I'm not into Tarot, horoscopes, or anything else like that. Still it makes for a good book as I know from reading one of your books.

Shari,
If you don't know your birth time, you can still do one (you won't get your rising sign, but unless some of your planets are on the cusp, the rest of the info will be generally correct). So even if you only get a general time, give it a go!

Kait, I am heading into my second in a few years, so I am going to remember to keep my metaphysical seatbelt on this time.

Gloria, thank you for the compliment! That means a lot coming from you. My characters don't believe in tarot or astrology either (though they probably should).

You know when your characters' birthdays are. Wow. For most of mine, I'm not even sure how old they are! Kudos.