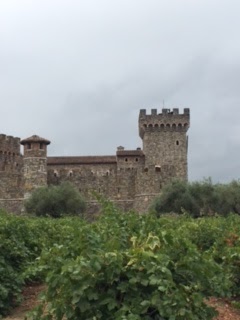 On my recent trip to California to visit my daughter we went to Napa Valley, California’s wine country where we passed numerous vineyards and wineries. What we were heading for was a winery that was in a fantastic authentic Tuscan castle. 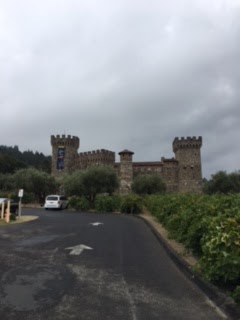 The owner, Dario Sattui calls it “The Castle of Love.” It was a culmination of his life’s dream to build an authentic Tuscan castle where he could make outstanding Italian-style wines. It took him thirty years to build. To make it authentic in every respect, he used only old, hand-made materials and had it built employing the same methods and materials that would have been used 700-800 years ago. He said you can’t fake something like this. You either do it right or people will know it’s not authentic.

Experts consider the Castello an architectural masterpiece. It’s a magical place which will transport those who visit to medieval Italy. With two thirds underground, the Castello contains eight levels – four of which are underground. (I think he was counting the towers.) – 107 rooms; each one of which is beautiful and distinctive from the others. It totals 121,000 square feet or three acres of rooms. We visited most but not all of them including a room with a video playing with Dario Sattui talking about how he had his castle built. 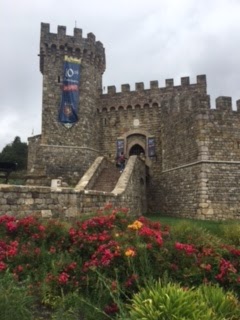 He brought more than two hundred containers from Europe filled with old materials and furnishing, used more than 8000 tons of local stone which they hand-chiseled, and brought nearly 1 million antique hand-made bricks from Europe.

The Castello contains all the elements a medieval castle would have possessed – a moat, drawbridge, five towers, high defensive ramparts, courtyards and loggias, a deep well, a functioning church, stables, an outdoor oven, an apartment for the Nobles, a Great Hall, and even a prison and torture chamber, and some of the most beautiful vaulted wine cellars in the world. 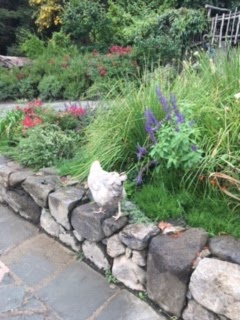 The castle is surrounded by 171 acres, 30 of which are grapes situated on one of the most beautiful properties in the United States. Looking out from one of the higher windows, it was lovely. I liked seeing goats and chickens wandering over some of the grounds. 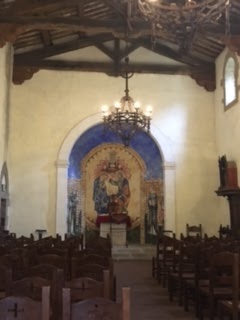 Mary and I didn’t take the guided tour which was more expensive, but paid the entrance fee and wandered about on our own. The Catholic church was a beautiful, and we each lit a candle for my son John, and sat down on chairs in front of the church to say a little prayer. 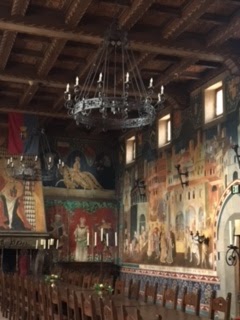 Then we wandered on to look at the huge Great Hall which had tables and chairs enough to fit many, people. I didn’t take time to count all the chairs, but there had to have been two dozen or more. In the inside court yards there were planters full of lovely flowers. 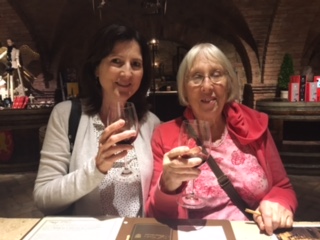 We eventually ended up in the basement area where there was a gift shop, lots of wine bottles for sale, and free wine tasting, which we did. Mary bought some wine.


From there we wandered on to the room holding large wine caskets, and eventually to the prison area, too. 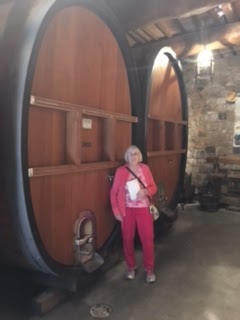 Some more facts from the brochure:


*All ironwork including lamps, gates and door hardware was hand-forged by Italian artisans.


*All doors and windows were made by Italian artisans and feature leaded glass windows.


I have visited castles in England, Wales and Scotland and was impressed by them, but I think this castle was even more impressive, and we didn’t even have time to visit all the 107 rooms. Fortunately, there were modern day toilets.

Have you ever visited a castle or some other building that was very impressive?

Gloria -- Sounds like a fun place to visit. One of my favorite places to go to when I am in New York City is the Cloisters, located in Fort Tryon Park. It's part of the Metropolitan Museum. While it is not a copy of any particular medieval cloister, it contains elements from many.

Gloria, what a unique place to visit in the Napa Valley! Jim's right, the Cloisters in NYC get an A+, especially the gardens.

My favorite is Berkeley Castle in Gloucestershire, England, which dates from the eleventh century. Instead of a moot, the castle owners flooded the nearby marsh to create a natural moot to protect it.

What a lovely place to visit... one question: Did they have a library? My favorite picture is you standing by that giant cask. LOL Laura

What a fabulous place! It's now on my bucket list.
I loved visiting the Mont Sainte Michel in Normandy, France. It is surrounded by tidal lands, so when the tide goes in, the castle/town/monastery becomes an island. You have to make sure you move your car from the parking lot before then, or the car will get flooded! We were there after dark, and you really get the feeling of being back in time.
Jim, thank you for mentioning the Cloisters - I haven't been in years. Time to go back.

Such wonderful pictures! It sounds like you had a great time, and is definitely someplace to put on my list of places to see.

Jim, I've only been to New York City once and didn't see the cloisters. I'll have to go there again so I can see them.

Margaret, I don't think I saw the Berkeley Castle when I was in England twice.

Laura, it was a big cask, and that was only one of many I don't know if they had a library or not. It wasn't mentioned and it would have taken us hours and hours to cover the whole castle.

Shari, I know you'll love it. Although I've traveled overseas five or six times, I have yet to go to France. I'll keep that place in mind for when I do go there some year.

The Hearst Castle in California was impressive.

Thank you, Kathleen. Most of them were taken by my daughter although a pair of twin sisters took the one of Mary and I together with her camera. The pictures I posted where only a small percentage of the pictures I have. Napa Valley even without the castle is a beautiful place to visit.

Sounded like an interesting place to spend a lovely afternoon.

The Cloisters, absolutely, but as a kid we wandered around Lambert Castle in the Garret Mountains. I remember it as being fairly unrestored at the time, but that could have been because I was a kid and I perceived it as old. I know there was no admission and most of the rooms were unfurnished. Of course there's Viscaya in Miami, and a multitude of castles in Europe whose names have long since fallen out of my brain. One place I've always wanted to go, nope, make that two - any castle in Transylvania and San Simeon.


Grace it was. If you ever get to California just north of San Francisco, you'll have to visit it.

Kait, I'm not sure where the Garret Mountains are, and I've never been as far south in Florida as Miami. I don't remember the names of all the castles I've seen in England, Scotland and Wales, either. I remember someone on our bus tour calling it ABC - Another bloody
Castle.