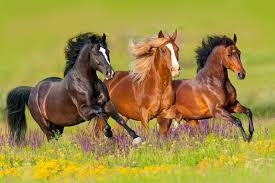 When I was a young girl I galloped everywhere hitting my thigh to go faster on my imaginary horse. I galloped through fields and woods leaping logs, galloped across the road to my cousin’s house or to my grandparents’ farm and sometimes further down the road to another cousin’s house. Sometimes I rode Wildfire, and sometimes it was Thunderhead or Flicka or another horse in my stable of horses. I dreamed of someday having a ranch in the west with hundreds of horses. 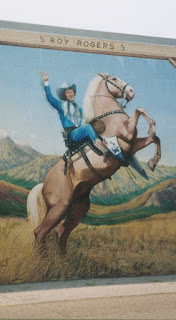 I think my love of horses came from the story my dad told of a pony he rode one summer in the mining town in Pennsylvania where he grew up. My grandfather was foreman of the mining stable. The superintendent of the mine bought a beautiful black pony for his son, and it was kept in the mining stable. The pony tossed the boy the first time he tried to ride it so the superintendent asked my father, about the same age as his son, to ride and gentle it. All summer my father rode that pony, but the superintendent’s son never got over his fear of it so the pony was eventually sold.


During my galloping period, I read every horse book in my small rural library numerous times, and at Christmas I usually got a horse book, too. I dreamed of horses and drew pictures of horses, but I was thirty-eight years old before I finally got my first horse. My husband heard of a horse for sale and took me to see it. Of course, I fell in love with that strawberry roan paint. I thought he was beautiful. A few days later he was delivered. We had no barn, no saddle or bridle or even a lead rope. We did have hay, grain and a water bucket.

We put him in a shed and a few days later my husband and young teenage sons started building a barn – a large barn with five stalls. A week after my horse arrived, I now had a saddle and bridle.  I was ready for my first ride on my very own horse. Now, mind you, my riding had been very limited over the years. Mostly it was while we were on vacation and found a riding stable where you paid for an hour ride with a group on trails following a guide. Seldom did we move out of a walk, but maybe we’d trot a little and once in a great while gallop for a few minutes. Neither my husband nor I had ever saddled a horse, but we’d watched while these trail horses were saddled so we knew how to do it. Or so we thought.


As soon as the horse was saddled, I mounted and headed down a trail into the woods beside our home. He was a high stepper and both of us were eager to be out and on the trail. I was euphoric. His ears were perked forward interested and curious as we went along. And then I turned him around to head back. Maybe I should have thought twice about buying a horse named Rebel because as soon as we were heading back, he took the bit in his mouth, and I couldn’t slow him down. He was heading home, and just where that home was in his mind, I didn’t know. It was then I felt the saddle slip. I learned from that experience, you always tighten the girth, wait a bit for the horse to relax and then tighten it more. Anyway. the saddle slipped and ended up under Rebel. Fortunately, I was able to kick my feet free from the stirrups and landed on the ground still holding onto his reins so he didn’t end up in some other county. He jumped about trying to get rid of that thing, but fortunately, I was able to unbuckle the saddle and not get kicked or stepped on.

So at the end of my first ride on my very own horse, I walked home with a saddle on my back now leading a docile horse. It wasn’t exactly the way I had envisioned that first ride. Eventually, Rebel was sold. He was a rebel. Over the years there were other horses and ponies. Once we had five at one time, one we boarded for a friend. My four kids joined 4H, and I became proficient at saddling and caring for horses. I learned to pull a horse trailer to take them to shows and for riding lessons and even took riding lessons, too.

Then there came a day when I had to move. I had to sell my last two horses because I didn’t have the money to put new fencing around the pasture of the small farm I bought. The house needed too many repairs and the barn needed a new roof. But my love of horses never went away. However, I down sized the dream. I bought a seven-month old pony I named Puffy, and her mother. The following spring, Mama Cietta had another little filly I named Phoebe, because that was when my phoebes returned. I didn’t have enough room in my small pasture for three ponies so when Phoebe was weaned, I sold the mother because she had been broke to ride. Now I have two totally useless small ponies – sisters – that I rationalize keeping as being compost makers for my gardens, but it’s really because I love them. 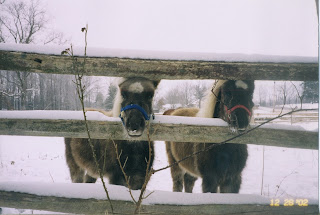 What dream did you have when you were young? Did it ever come true?

Oh, I did have dreams when I was young: fireman, cowboy, third Hardy Boy brother, savior of the world. None of those quite worked out, and yet I have no regrets because I would have made a lousy fireman or cowboy. Two Hardy boys seemed to work just fine, and saviors of the world tend to die young.

I have a bucket list that I have been whittling down. (while adding a new item here and there -- if you complete your entire bucket list, do you die? -- I don't want to chance it.)

I enjoyed meeting your ponies -- they're part of what keep you young.

Unlike many girls, I never went through a horse phase--it was always dogs and dog-themed books.

How great to meet your ponies.

You're an inspiration, following through on your dreams and adjusting as needed to make your dreams come true but still be practical!

To tell the truth, I can't say as I remember having too many dreams as a child. Just survival seemed like an adequate (and challenging) goal. My life today is much better than I'd even envisioned it could be.

I had the usual childhood dreams it did not occur to me that some person wrote books for quite a while. I like the blog. Buy a horse and the barn will come.

With five uncles who were career members of the Armed Forces, my goal was always to go into the military. That dream faded a bit because every time I mentioned it, people would tell me that nice girls didn't serve. But I decided that I would rather try it than to always regret that I didn't. So, I marched down to the Navy recruiter and, with my parents blessing, signed on the dotted line. I NEVER regretted it. I served for seven years, met my husband while on duty in London, England, and only left the Navy because my husband, who was in the British forces, and I would have been separated. Now our daughter is serving in the Army. I guess you could say we are a military family.

I loved seeing all your ponies and horses, Gloria! Your blog made me think of a little neighbor girl of many years ago. Callie also went everywhere slapping her thighs and whinnying. Definitely a pony girl.
Childhood dream? I don't know that I had a "dream" per se, but I did always want to be Emma Peel of the Avengers.