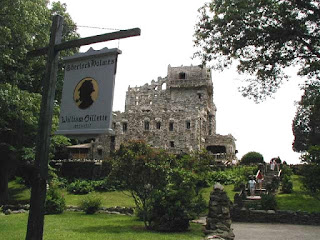 Don’t believe me? My daughter and I visited just last week. The castle looks like it was transplanted directly from a misty Scottish moor to a spectacular overlook on the Connecticut River.

How did that incongruous mansion get there? It all started with a young man who defied his parents to become an actor. 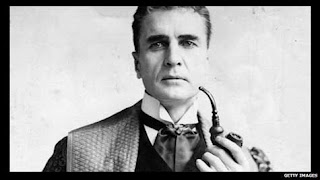 William H. Gillette was born in Hartford, CT, the son of a US Senator. His mother was the direct descendant of Thomas Hooker, the co-founder of the Colony of Connecticut. Mark Twain and Harriett Beecher Stowe lived down the street from his boyhood home. To say that his parents didn’t support his desire to work in the theater would be an understatement.

But William H. Gillette became one of the most popular playwrights and actors of his time. His legacy endures in two ways. 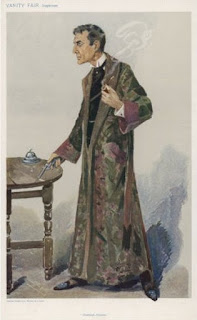 First, Gillette was the first to portray Sherlock Holmes on stage and screen, and his acting choices became the bedrock for the Holmes persona. When Sir Arthur Conan Doyle decided to bring Sherlock to the stage (evidently Doyle needed the money) he contacted a fresh, young American to adapt the stories into stage plays. Gillette read all the stories and the play he wrote, called simply Sherlock Holmes, debuted in 1899 to great success. Holmes and Conan Doyle enjoyed a long creative partnership and personal friendship.

Some of the trademarks we associate with Holmes were the creation of Gillette, not Conan Doyle. The signature deerstalker hat and caped coat were hunting gear a well-bred Englishman would never wear in the city, but became part of Gillette’s Sherlock costume. He also adopted the curved briar pipe, which did not appear in the stories, thinking it a distinctive stage prop.

Gillette played Holmes on stage and on film for almost 33 years and made over 1,300 stage appearances as the great detective. This work made him a famous and wealthy man. 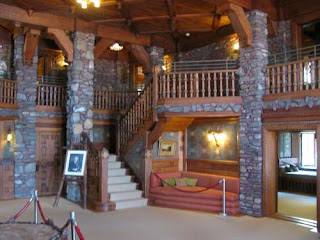 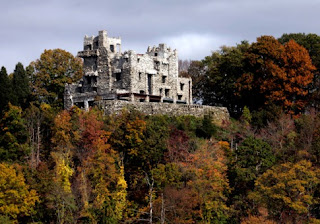 He used his fortune to build a twenty-four room mansion of magnificent imagination and charm in the Connecticut countryside. Known to locals as “Gillette’s Castle,” the building sits high over the Connecticut River in East Haddam. The exterior walls were constructed with local fieldstone, interior walls built in southern white oak. One can imagine Sherlock Holmes retiring to this retreat, walking in the woods enjoying the spectacular view of the river. Inside, Gillette designed ingenious locks, built-in furniture, and strategically placed mirrors that allowed him to keep track of the comings and goings of his guests.

Gillette died in 1937 and the State of Connecticut purchased the property from the executors of his will. He had directed that the property not fall into the hands of “some blithering saphead who has no conception of where he is or with what surrounded.”

If you’d like to visit this home of “Sherlock Holmes,” it is open from Memorial Day through Columbus Day. Check out www.stateparks.com/gillette_castle.html for more information.

Have you ever visited the home of a fictional character?
Posted by Shari Randall at 12:00 AM

Fascinating! I loved the castle story, but was astonished to learn that the original Holmes did not have the hat, cape or pipe!

what fun! A visit is on my life-list, when I'm next in Connecticut during the summer or early fall.

I enjoy learning about transformations of the original Sherlock, which continue today.

Such a fun post, Shari! I'm teaching a Sherlock class now, and my students were disappointed to learn that Holmes never said, "Elementary, my dear Watson." But part of what we discuss is how so many others, right up to Benedict Cumberbatch today, have been part of building our conception of Holmes.

Would love to visit this castle! Thanks for taking us there virtually. :-)

I had no idea. Thanks for the history lesson, Shari.

Shari, I found your blog very interesting. I want to visit the castle, and I'm sure my sisters who I go camping with would like to visit it, too.

what a fun place.

WOW! I had no idea that most of what I associate with Holmes were made in America. How cool is that! The castle itself looks familiar. I may have visited as a child, or seen it from afar. Looks like the type of place I'd love to see again up close and personal.

Isn’t it interesting how our memories of things are often formed by pictures rather than words? Gillette’s inventions surely inform our “memory” of Sherlock as do Hollywood’s The Wizard of Oz inform our memories of Frank Baum’s Oz books.

That said, I’ll never picture Tom Cruise as my vision of what Jack Reacher looks like!

Thanks for stopping by everyone! I was out of town and away from Internet - glad you had fun visiting the castle virtually.

And I definitely agree with you on Reacher, Jim!

Thanks for your valuable information. It really gives me an insight on this topic. I'll visit here again for more information.

companies that do home staging