THE UNLIKELY PILGRIMAGE OF HAROLD FRY 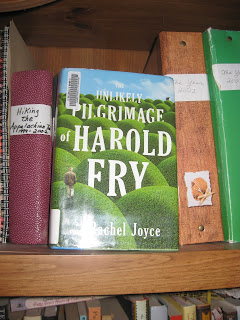 Two weeks ago at my Red Read Robin book club, we discussed the book The Unlikely Pilgrimage of Harold Fry by Rachel Joyce.  Unlike the last book I wrote about Grandma Gatewood’s Walk, this was a book of fiction about a man who took off on a walk.


Harold Fry is recently retired and lives in a small English village with his wife Maureen who seems to be irritated with him much of the time. He spends a lot of time sitting in his recliner or mowing the lawn, while Maureen spends every day dusting, sweeping and cleaning the house whether it needs it or not and talking on the phone to their son, David. Then one day a letter arrives from a woman he used to work with and hasn’t seen or heard from in twenty years. Queenie Hennessy is in a hospice and is writing a good-bye to him because she’s dying of cancer.


He writes a reply, but before he can mail it to her in the mailbox down the road a chance encounter with a girl at a gas station makes him decide to deliver his message to Queenie in person. In his yachting shoes and light coat, Harold Fry starts out on an urgent quest determined to walk six hundred miles to the hospice. He believes as long as he walks, Queenie will live. He’s left his phone and his wallet behind. He meets many people along the way, many that help him and many who think he’s crazy.


Maureen has no idea what happened to him. She starts talking to the widower next door who lost his wife recently. Eventually Harold calls her collect and tells her what he’s doing. She thinks he’s crazy but starts to realize she really misses him. As he goes along, he calls his wife to talk briefly with her, but both of them can’t quite tell the other they miss them.


Like Grandma Gates, people ask him why he’s walking, and eventually reporters write about him and people start joining him to walk on the pilgrimage to save Queenie’s life. 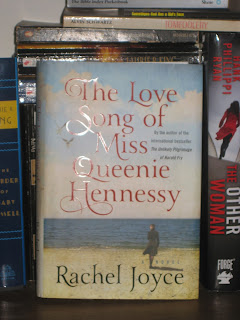 The book has wonderful reviews from The Washington Post, The New York Times, and People, and everyone in our book club who read it loved it and we had so much to say about it. I loved it so much that after I returned it to the library I bought a used copy at The Village Book Store plus her 2nd book called The Love Song of Miss Queenie Hennessy which she wrote after this book. I haven’t read it yet, but look forward to it. Her first book had me smiling at times, and worrying about him at other times, and sometimes feeling teary eyed, too. I won’t tell you how it ends because I’m hoping you’ll read and enjoy the book, too.

What book have you read that had you smiling at times and a little teary eyed at other times, too.
Posted by Gloria Alden at 12:00 AM

Gloria, this books sounds wonderful! I felt that range of emotions while reading A Man Called Ove. Have your book clubs read that one?

Thanks, Gloria, for the recommendations. You and your book club read some very interesting books. Have you tried audiobooks? I listen to them in the car, while doing housework, and at night when I can't sleep. It really increases your "reading" time.

Your description had me asking how does it end? Great review and synopsis, Gloria. Keep them coming.

No spoiler in your review. Thanks

Shari, yes one of my two book clubs read A Man Called Ove, and I bought his next book "My grandmother asked Me to tell you she's sorry." I haven't gotten around to reading that yet because I have so many other books to read.

Grace, I belong to two book clubs, and yes they do choose some interesting books to read. I seldom am in my car long enough to listen to a book, and I prefer to hold the book in my hands and go back to check on something if I'm trying to remember what happened earlier. I
don't have an e-reader, either. It's why my house is filled with books. :-) And I can share
my books with friends as long as they return them which they do. I'm sort of like a library that way. I just finished Louise Penny's latest book, and as soon as I see my sister, I'll be giving it to her to read. I always write my name at the top of the title page.

Elaine, I didn't want to give the ending. You have to read it to find out, and I'm sure you would enjoy it even if it isn't a mystery.

Warren, I'm glad you appreciate that. I know you'll love the book.

it sounds like an interesting read, Gloria. Good review.

Thanks, Margaret. I think you would enjoy it.

One thing I like about book clubs is that they have me reading things I might not otherwise even pick up.

My book club is going on a "field trip" to hear Laura Lippman speak, so we read one of her Tess books. I'd never read any, despite her being a fairly local author for me. Her books at set in Baltimore. I worked in Baltimore for a while, and knew some of the neighborhoods in which she set some of her scenes.

I'm now going to work my way through all the Tess books.