Losing My Way by Trixie Stilletto

Professional writers write. Like professionals in many other fields, we tend to work through sickness and health, times of triumph and failure. Writing is a job; one we take seriously.

I have followed that rule for years. I wrote fast and always had multiple stories waiting to be told. Until the summer of 2014.

That’s when I learned I have a particularly aggressive form of breast cancer called Her2+. Throughout the next year, I tried to work while undergoing chemotherapy and radiation treatments. I came up with several really good story ideas and characters. When it came time to sit down at the computer and put those ideas into words or give those characters a voice, I simply couldn’t.

I was a failure as a professional writer. I had lost “it,” whatever “it” was. I doubted I would ever be able to get “it” back.

After getting diagnosed, I decided to chronicle my treatment on social media. I’ve never been one to journal or keep a diary. My first writing job was as a sports writer/photographer for a small daily newspaper in Wisconsin covering two or three stories a day. With each successive newspaper job, I got busier. Who had time for personal stuff other than my fiction?

I was determined, though, to let my small band of social media followers know what I was experiencing. I know breast cancer can kill. Despite numerous discoveries and advances in treatment and survivor rates, there are types of the disease that kill with brutal efficiency and calculation. Too many women (and men) ignore signs or don’t get examinations. By being vocal about my journey, perhaps someone else would be spared.

Anyway, how hard could this social media thing be? I’m a professional and this was for the greater good.

But throughout the rest of 2014 and over half of 2015, I found I had trouble organizing my thoughts enough to form a coherent post. I learned there’s something called “chemo brain.” It’s a real thing, I was told by doctors and other patients.

Right. That’s like “writer’s block.” Another one I knew didn’t exist. You never hear plumbers say they can’t do their job because of “plumber block” and my belief is if something isn’t working, rewrite it until it does.  I kept remembering my first boss who used to throw a glue pot (yes, I’m dating myself because it’s been more decades than I can count since glue has been used in newsrooms) at me when I was struggling with a lede (the opening paragraph of a news story).

Since I knew I wasn’t blocked, there was only one other conclusion. My writing ability was officially dead. “It” was gone for good. Time to find another career. 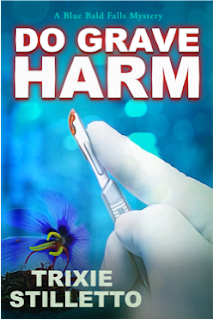 Then one day, I was undergoing radiation treatment and “it” came to me. The perfect character and the perfect story. From that germ of an idea came my latest story, Do Grave Harm. Things have changed, of course, because I’m not the same person I was before 2014.
I don’t write as fast. Do Grave Harm took over a year to complete. Before, I would have finished three or four stories in that time. But change is okay. I’ve learned to accept and revel in what I can do, not in what I can’t.

In talking to other cancer patients I realize this kind of change is something we’ve all had to learn. I’ve also learned sometimes my “it” needs to regroup and recharge. Like my physical body getting older and maturing, my mental stamina has done the same. Perhaps this change was caused by something I had no control over, but it is my new normal. The “it” is back with a different flavor and focus. Perhaps my “it” will be better for the change.

Author Bio
A southern girl, Trixie Stilletto traveled north when she found the love of her life. Together, they enjoyed more than 20 years working as journalists. Now back home in Tennessee she’s writing stories that range from short hot romances with a kiss of humor to southern-flavored mysteries. She lives seven miles from the neighborhood where she grew up with two cats, an aging beagle and a host of characters waiting for her to tell their stories.

Do Grave Harm, the first in the exciting new Blue Bald Falls cross-genre series is available in digital and paperback from major retailers. Portions of the proceeds from Do Grave Harm will be donated to breast cancer charities.

congratulations on your new release with, I hope, many more to come

Thank you for your inspiring words. Best of luck with your new book!

I've been there and recovered at least to a new normal. I have a darker edge to some of what I now write and, like you, I continue to write.

Thank you for sharing your experiences with us. Yours is a lesson in overcoming adversity and gaining sheer determination to carry on with your work. You have certainly inspired me to keep on trying.

Congratulations on overcoming such adversity.

When my sister was diagnosed with advanced breast cancer, it felt like the world had stopped for me. I can only imagine what it felt like to her.

I am now dealing with some personal & familial health issues, and while I am writing, I often find that the day has come to an end, and I have not written anything. Like you, I hope to recover "it" one of these days.

Adversity gives us perspective on what is really important to us. Best of luck with your newest story.

Congratulations on your new book which I have put on my TBO list. Although I haven't had cancer, I've had many other things happen - death of a child, grandchild, parents, and a
brother close in age to me. I think these things that happen to us eventually increase are ability to write. It's those that live the perfect life with no problems that can't write a novel with depth, in my opinion. Good luck with this book and those that follow.

Fist bump, Sistah! Rock on. Class of 2008 here. Congratulations on the book and I am off to Amazon now.

Thank you one and all for commenting! Much appreciated!
Margaret: Thanks, I am hoping for many more releases to come as well and am working diligently on my next release, an as yet untitled story set in the same town, Blue Bald Falls, as Do Grave Harm!
Shari: I'm glad my post inspired you. Hopefully it will do the same for others!
Warren: So thankful you recovered and are still writing. Keep it up. A new normal can be ok, can't it?
Grace: Thank you! Your words of praise have lifted me today!
KM: Keep hanging in there. I discovered on my journey that sometimes you just have to forgive yourself on those days. As a former sports writer, I likened it to a relief pitcher in baseball. Some days, he just doesn't have it and gets pummeled. Others, he's a sure bet for the Hall of Fame. But that pitcher never remembers the day he got pummeled, just the day he was unhittable.
Jim: Thank you very much!
Gloria: I can't imagine your suffering but I believe you're right in the adversity helps once we get past it!
Kait: Woohoo on your continuing battle to beat the monster!!!!