The Big Reveal by Carla Damron

I just wrote a critical scene in my WIP. It’s the big reveal—when the bad guy gets outed as the bad guy, after everyone has believed him to be someone else. I mulled when to insert the reveal. I tried it in a few spots: Too soon. Too late. Yes, here. 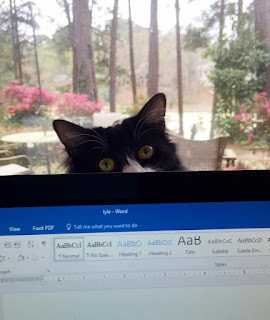 My Editor Keeps a Close Eye

Writing the scene took me into the zone. My pulse quickened. Breathing fast, shallow. On the keyboard, my fingers took flight.  I felt the suspense build in my nervous system. This is what I want my readers to experience, too, and it’s odd but wonderful when, as I writer, I experience what I hope I’m conveying on the page.

I’ve grown tired of one-dimensional villains: characters that aren’t well developed.  Mystery writers will do this when they view the antagonist as a plot construction. That can work, too---if the reader doesn’t connect with the bad guy, it’s an easier read: Good vs evil. We root for the hero and ultimately, he or she wins.

As a writer, I find that less satisfying. I’ve lived in my bad guy’s head for weeks now. I know what he drives, what he wears, how he voted. I know his deepest regret and most hidden fear. I know what and whom he loves. I get him. He isn’t pure evil, but someone who got trapped and made the wrong decisions. He kept digging himself deeper and now the only way out is doing something deadly.  He’s a survivor and will do what he perceives he must do, but who will suffer as a result?

I haven’t decided what should happen to him at the end.  Should he die? I find myself not wanting him dead. He needs consequence—prison, or worse—but something in me wants to keep him going. I’d like to revisit him later, perhaps in a sequel.

How might the events of this novel change him?  Can I let him get away?  We don’t let bad guys get away, do we?

Some writers do, though. At times that bothers me, but at other times I accept that it’s realistic. After all, plenty of bad guys walk our streets, get away with serious crimes. Some hold positions of authority—even win elections. I’ll stop there.

Will the reader connect with him as I have? Will that make the novel more difficult to read? The subject—human trafficking—is difficult enough. While I want to entertain, I also like to challenge my readers. Maybe this limits my audience. Or maybe it can expand it. Maybe people who don’t normally gravitate to mystery/suspense will be willing to give this a try.

Or maybe it’ll be too weird for my agent to place.

I plan to finish this revision in the next two weeks. We’ll see what happens then!

Have you ever found yourself connecting with a bad guy? How did it affect your reading experience?
Posted by carla at 12:00 AM

Well-drawn antagonists can be at least as interesting as the protag – and why not allow him to survive, maybe even get through a hung jury so he’s out on the street for your next novel? I introduced the Happy Reaper in ANT FARM (Seamus McCree #1 – BSP Kindle ebook on sale right now for $0.99) and he reappears in #s 5 & 6, both of which are Works-in-progress.

A big mistake some writers make is always portraying their bad guys as bad or downright evil. Sometimes that isn't the case. G. K. Chesterton said to look for the person who became desperate. That way you can have a likable character who in desperation turned to murder. Now when I read a mystery I always suspect the most likable character in the book.

I, too, like nuanced villains. In my current WIP, I'm afraid my villain is too one-dimensional, and your post gives me a few new things to think about as I'll need to fix this in revisions.

Oh, Jim, I'm so glad the Happy Reaper is coming back! I hope he does well in Irma. Not sure which Island is his. I'm quite sure he IS a survivor though.

Carla, one of the joys of British mysteries is that the reader often gets to know and care about the villain as well as the protagonist and the victim before the crime. It's a method of character development different to the US model and it often humanizes both the crime and the criminal.

I don't watch much TV but as far back as I remember, there have been popular TV shows based on that very premise- THE Cat, It Takes a Thief, How to Get Away with Murder. I know I'm missing a big one, I can only come up with the letter D. I'm sure readers would also identify. In fact, I'm sure it would make a great series.

Most "bad guys" are conflicted. Just like most "good guys."

You do want a satisfying ending, but I see nothing wrong with people in fiction escaping consequences. As you say, it happens all the time in real life.

Right! Desperation can drive us all to do stupid things. Maybe each of us is just a few bad decisions away from being on the other side of the hero/antagonist continuum.

I think an interesting bad guy has most of the characteristics of the good guy but also lacks something the goos guy has or hads developed during the book.

In most of my books, the murderer isn't a bad guy so much as he/she is desperate like G.K. Chesterton said. I develop most of the people who will be the murderer, and often I feel so sad for him/her, especially if he/she has family who will be hurt by this. Once I liked my potential murderer so much, I had to change it to another equally nice person.

In books that aren't whodunnits, the bad guy is the protagonist--his past, he's trying to overcome. Sometimes, people don't forgive him. Others fall in love with him--but usually in those books the bad part doesn't include murder.

Did you fall for bad guys in your youth, Carla? I did too, but I am totally over it. Now--I look at bad guys and wonder why I put up with them, how I could have been so stupid, and think what PITAs they would be to live with. You don't have to write a one-dimensional character--but I'd say--just get over him.

Hi Carla, It's such a great sign when you're heart is pounding while you're writing your scenes of suspense!
I've gotten so tired of the brilliant, mastermind bad guy - the Moriarty character from the television show Sherlock comes to mind. The writers tried to make him so over the top it was just ridiculous.