The Dreaded Deed by Carla Damron

Today I had to do it. It could wait no longer. I had to pick up the telephone and dial, despite my dread, despite the small knot of worry in my sternum. This is the call one avoids like the one to tell your spouse that you dented the car, or the call to set up your colonoscopy appointment. You postpone as long as you can then do the horrific deed.

So I did. I dialed my cable TV company.

Our bill had been climbing at the rate of kudzu on a power pole—a seventy buck increase in three months. The last decent rate we had, the one that ended in March, came about only when I made the call like I was making today. Only this time, I didn’t have a glass of wine to get me through it.

The first person I talked to, “Guy,” who didn’t sound, in any way, American, was “sorry to hear of our bill troubles,” so he offered us a GIANT discount of ten whole dollars!

Nope, I said. “Let me talk to a retention person.”

“This is the best deal we can offer at this time. I’m so sorry.” Guy was trying to sound sincere, but I wasn’t buying it.  I started Googling “options to cable” and “cutting the cord,” when he put me on hold for the third time. None of the alternatives gave us everything we need. Sure, our cable package includes about ten thousand channels we never watch, but it has the 7-8 we do, and we like that.  I can watch my crime shows. Jim can watch the Red Sox. And, when it’s needed, I can usually find a therapeutic Big Bang Theory episode to put me in a good mood.

I wished I could watch one while I was on hold.

Finally, “Amy”, also not English, came on the line. She would love to keep us as valuable customers. How about ANOTHER TEN DOLLARS off our bill?

“No, A-M-Y,” I accented her name. “I want the $70 increase to disappear. Only you can make that happen. So. Do you keep us or do we switch?”  I’ve gotten good at playing hardball with Cable, but it takes its toll. 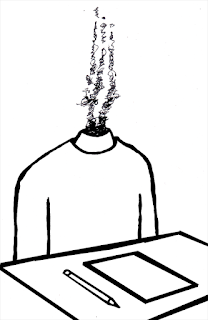 On my doodle pad, I draw Amy’s picture. I gave her a big nose and unflattering glasses.

“I see what you’re saying. Let me check with a manager.” This is an annoying, ineffective car dealer tactic. I made Amy’s torso fatter.

After about three years, she came back on the line. “I’m sorry. We have no other cable or internet specials other than what we’ve offered. You don’t have phone service with us, and the only special we have right now is with phone.”

“Well, you get phone, the same cable package, and faster internet for seventy-five dollars off your bill. That deal lasts one year.”

Why hadn’t she led with that? Why put me through the cable phone maze, then leave me on hold so long that it felt like I was driving through Texas?

ADDENDUM: When an email statement of the change to my account arrived, they had ADDED a hundred dollars to the monthly plan. Yep. Back on the phone. I think it may be resolved. Or not. I may turn the Amy drawing into a voodoo doll.

I think the only way to beat this system is to opt out totally.

While I wouldn't mind that, my husband watches a fair amount of TV. I watch almost none--the last thing I watched was the Belmont Stakes, and I would have been just as happy watching it on my computer. Even later, in news reports.

My husband now makes sure I never see a cable bill. He does the same thing with the membership for the country club where he plays golf multiple times a week.

I remind myself that he worked hard for years to provide a home for my daughters and me, and that I should begrudge him the things that he feels greatly enhance his quality of life, especially since we can afford them.

When my cable company got swallowed by a giant boa constrictor of a bigger and lousier cable company the headaches started. I found an alternative and carefully followed the directions to escape the thorny grasp of the lousier company. (Mixed metaphor alert) However the billing continued and I got threats to turn me over to a collection company. When I finally reached a human by phone she wanted me to give them proof. I told her to talk to her own company and her own company's records.

Funny blog, but also sad. Life just gets more complicated every day. I used to wonder how some religious groups could eschew modern technology. Perhaps they have the right idea.

I went through this last month! I left my "dish" company to move over to my internet provider because each month the charge went higher.
I ended up moving my landline as well. I only need it to open the front door access to my building, and the former long-time company kept increasing my bill for that too.
When I went to leave, they threatened a $200 fine for early cancellation! I'd been a loyal customer for ten years! They did not charge me the fee after three supervisors.
I am still not happy, but I am saving $75.00 a month with no foreseen increases. (knock on wood-my head in this case).
Recently, I visited my wireless provider's store (my former cable provider). there were at least six people ahead of me all with double billing problems which had occurred since they switched to a "better" package instead of dropping them. Mark Wahlberg and his groundhog aren't what this company needs. A swift kick in the package would be more in line.
My hubby is the reason for us keeping cable; he works hard and enjoys network tv.

Similar story to yours, Carla. Those bills just get higher and higher. I dropped their protection plan, I dropped everything I could--they offered improved service, which would have cost me money. I have to admit,

I like Apple TV. We get Netflicks through it so I don't have to hook up my computer to the TV. I wish everything came via the Internet--except our TVs would be hacked, too.

We have cable with the sports package for soccer...lots of soccer. And during the Olympics, additional coverage on NBC Sports. But like Kathleen's husband, the scientist works hard and does enjoy his soccer coverage.

I hate feeling fleeced, which I do when dealing with the cell phone company and car dealership service department. And don't get me started on computer problems.

thanks for the feedback. Wouldn't it be wonderful to have this option: an ethical, company with polite, helpful workers who keep you because of good service. And maybe a la cart channels--I really don't need 700 shopping channels, nor most of the smaller networks. A woman can dream ...

Ah, we recently went back to TV (by which I mean the box on the wall, not the thing with the rabbit ears I grew up with) Dish came up with an offer we could not refuse so after 10 years of, "No thank you." we said, "Yes." So far, it's worked out well. Of course, we only watch it maybe once a month, Netflix had become our habit and now that we've become Prime members, we are learning to speak Amazon as well. Why did we make the switch? HGTV and The Weather Channel. This is Florida!

We just had a storm blow through and I was lamenting the lack of real coverage when my husband and I suddenly remembered, we have real coverage! It does take a while to come back home again.

We left, Carla, for the same reasons you did. Our bill climbed at an alarming rate and every month brought a new hike. So far, Dish has been reliable, the bill predictable, and we are happy. If that changes...I plan to remember those magic words, "May I speak with someone in the US, please." From what I understand, if they do business in the USA, they have to have some customer service in the USA, and they have to make it available to you. So much is lost in nuance when you're not speaking to a native speaker. I always accomplish so much more when I speak with US based customer service, and even if I don't get what I want, I understand why.

Good luck -- it can be SO frustrating.