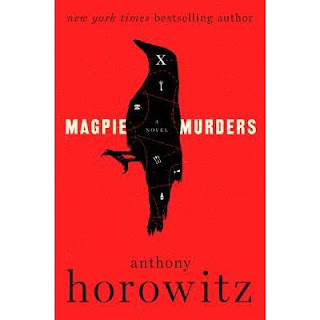 Writing a review for a mystery is a tricky business. How to keep the review spoiler free while at the same time giving readers a taste of the ingredients that make a book a tempting dish?

This is especially true of Anthony Horowitz’s Magpie Murders. Some reviewers called Magpie Murders “a puzzle within a puzzle.” It was certainly that, but more importantly for me and other fans of classic British mystery, it was a book that better channeled Agatha Christie than any other I’ve read in years.

I read once that when Horowitz was a young man, he traveled around the world, reading Agatha Christie novels as he went. He certainly absorbed all the elements that make Christie’s Poirot books catnip to the mystery reader: the omniscient-but-irritating investigator, the cozy English village, the simmering resentments and crimes barely covered by a lace tablecloth of respectability and good manners. More than that, he’s mastered Christie’s deft and delicate planting of clues in broad daylight.

Horowitz is well known for his work on television’s Foyle’s War and Midsomer Murders. He was chosen by the estate of Arthur Conan Doyle to write The House of Silk and Moriarty, and completed one of Ian Fleming’s James Bond novels to acclaim. Plus, he’s known to millions of young adults as the author of the exciting Alex Rider spy novels. Talk about writing chops.

I couldn’t wait to dive in.

The story opens with an editor, Susan Ryeland, reading the latest book in her best selling author Alan Conway’s Atticus Pünd mystery series. The book-within-the-book is called Magpie Murders. One begins to feel the proximity of a rabbit hole. One doesn’t mind. One jumps in with both feet.

The novel within the novel is perfection. Atticus Pünd (yes, with an umlaut) is just as brilliant, irritating, and pompous as Poirot. He may be German instead of Belgian, but he’s the guy. His assistant, James Fraser, was actually an improvement upon the dim but good hearted Hastings — younger, more sympathetic, more perceptive.

That’s why it jarred a bit every few chapters to be tossed back into the current day, “real world” with Susan Ryeland. She discovers that the last few chapters of Magpie Murders have gone missing. Susan’s search to find them leads her into the twisted world of the author and another constellation of suspects.

Verdict? I give Magpie Murders four and a half teapots out of five. It would have been five but the framing story was bogged down by just one too many red herrings, especially one that just didn’t ring true.

But honestly, reader, you won’t care. If you are looking for a perfectly entertaining and pitch perfect channeling of the great Agatha’s Poirot, look no further. Get the book, make yourself a lovely cup of darjeeling, and dive into Magpie Murders.

Have you read the Magpie Murders or any other great mysteries lately? Please share in the comments below.
Posted by Shari Randall at 12:00 AM

Two stand-outs from my summer reading:

Daniel Silva, House of Spies (Gabriel Allon and his team end up in Morocco on the hunt for a terrorist)

Looking forward to Magpie Murders. I've read only good comments about it. I'm 203 out of 205 holds in the Cincinnati library system.

I haven't read this book, but I wrote it down.

I've been reading Anne Cleeland's Acton and Doyle series. I finished the latest Murder in Honour that came out this year and then went back to read the first in her series because I wanted to refresh my memory on how they connected although I pretty much remembered it.

I read the latest Linda Castillo's Kate Burkholder series of an ex-Amish police chief in a small town. "Down a Dark Road."

Louise Penny's latest book is on order and should be arriving shortly.

I read 10 books in July and so far 5 books in August with two I'm still reading. Most are
mysteries, but there are the books I read for two book clubs, too. The one I'm finishing
up now is River of Doubt, the true story of Theodore Roosevelt written by Candice Millard.
I read it years ago and when we picked books for the coming year last December I picked
that for a true story book review. It can be a real page turner as you wonder what is going
to happen next as he goes down a river that has never been explored by anyone although there are natives who are dangerous. All sorts of problems arise making you wonder if
they'll ever get to the end alive. His son is with him.

I haven't read the Magpie Murders. I have read two terrific mysteries this summer:

Michael Connelly' sThe Wrong Side of Goodbye is the latest in his terrific Harry Bosch series. I am rarely disappointed by his books.

I'm working my way through Craig Johnson's Longmire series and just finished Hell is Empty, which is the third book. I loved the first (The Cold Dish), not so much the second (Death Without Company), and wanted to give the series one more try since I had liked the first so well. Glad I did.

Margaret, those two sound great. I hope that library holds list moves quickly for you.

Hi Gloria, River of Doubt sounds terrific. I love the Kate Burkholder series, too. Too many books so little time!

Hi Jim, We all need WAY more time for reading, don't we? I've only read a couple of Michael Connelly's books, but they were both terrific. I'd love to dive more fully into the Longmire books also. I came to them by a novella, The Spirit of Steamboat which I loved and gave to lots of people for gifts.

Magpie Murders sound like my idea of a great winter read. Don't ask me why, I always read Christie books in the winter.

I've been working my way through my TBR list and have vowed not to buy another book until I get my tottering piles under control and my Kindle list down to something manageable! I confess, I have not had much time for reading this summer and am woefully behind on my Goodreads challenge. That said, I have just finished Shelley Costa's Practical Sins for a Cold Climate and loved it. The writing is clear and crisp. A style that makes me want to start right over on page 1 when I get to the end just for the beauty of the use of the language.

Currently, I'm reading a book by a guy named James Jackson - Ant Farm, you may have heard of it? I'm loving it.The story is engrossing and the two mysteries weave back and forth into an evertighting pattern. Can't wait to discover how it all turns out.

Kait, I'm with you! It's definitely a curl up with a cup of tea book.
Practical Sins for a Cold Climate is one of the best titles ever (slips title into tottering TBR).
Hey I've read some of that guy's books, too! Cabin Fever was fantastic. Watch out, you might get hooked ;)

You've caught my interest. Sounds like a book that I definitely want to read. Right now I'm reading "Death at the Seaside," by Frances Brody, a delightful British writer I met at Malice. Of course I've got several audible books that I'm also listening to (one in the car, one on my iPhone, and one near my bed), including "The Inspector and Mrs. Jeffries" by Emily Brightwell, a charming and light mystery for summer, Sheila Connolly's "Buried in a Bog" and "Murder on the Gravy Train," by Phyllis Richman.