My new release, Run Dog Run, is centered around the world of greyhound racing. I wanted to write an engaging story about animal rights issues, which are one of my passions. I used to be a member of Wildlife Rescue, Inc. when I lived in Austin. I rehabbed and raised orphaned wildlife with the goal to release them back into the wild if possible. It was a very rewarding experience and planted the seed for the Kate Caraway series. 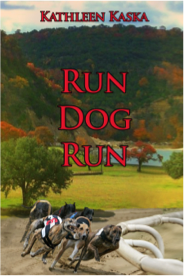 Run Dog Run is my latest release, but not my first. I finished the first draft fifteen years ago. It came close to being published several times, but no cigar. An agent told me I preached and editorialized too much. She was right. My first attempt was too heavy-handed. I rewrote it, but put it on the back burner and let it simmer for a few years. Two years ago, I updated it again and sent it out. Black Opal Books sent me a contract, and there you have it.
The story takes place in the Texas Hill Country west of Austin. My protagonist, animal-rights activist Kate Caraway, travels to a friend’s ranch in Texas for a much-needed rest. But before she has a chance to unpack, her friend’s daughter pleads for Kate’s assistance. The young woman has become entangled in the ugly world of greyhound abuse and believes Kate is the only one with the experience and tenacity to expose the abuse and find out who is responsible. On the case for only a few hours, Kate discovers a body, complicating the investigation by adding murder to the puzzle. She’s in a race against time to find the killer before she becomes the next victim.

The most difficult part of writing the book was doing the research, which sent me to a few places I wasn’t thrilled to visit. A knot formed in my stomach the day I drove up to a greyhound racetrack outside of Houston. I wasn’t sure what to expect, but if I wanted to write a book about greyhound racing, I needed to watch the dogs run. I spoke to the staff about what happens before and after races, where the dogs are kept when they are not racing, how much of their lives are spent running, and how to bet on the dogs. I also toured a greyhound adoption facility where the dogs were well taken care of. The only problem is that I wanted to take all of them home. In my book, I included a character who operates an adoption facility. Part of my rational for writing the book is to heighten awareness of the adoption process for retired racers. 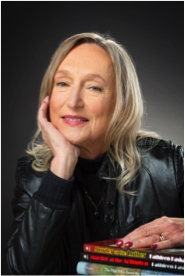 Kathleen Kaska is the author two awarding-winning mystery series: the Sydney Lockhart Mystery Series set in the 1950s and the Classic Triviography Mystery Series, which includes The Sherlock Holmes Triviography and Quiz Book. Her first two Lockhart mysteries, Murder at the Arlington and Murder at the Luther, were selected as bonus-books for the Pulpwood Queen Book Group, the largest book group in the country. Her latest Sydney Lockhart mystery, set in Austin, Texas, is Murder at the Driskill. When she is not writing, she spends much of her time with her husband traveling the back roads and byways around the country, looking for new venues for her mysteries and bird watching along the Texas coast and beyond. It was her passion for birds that led to the publication The Man Who Saved the Whooping Crane: The Robert Porter Allen Story (University Press of Florida).
Kathleen is a writer and marketing director for Cave Art Press. Her collection of blog posts will be released in August 2017 under the title, Five-Minute Writing Tips: Does Anyone Have a Catharsis Handy?
Run Dog Run Kathleen’s her first mystery in the new Kate Caraway animal rights series. A portion of the book’s proceeds will be donated to The Greyhound Project.
Books are available through Black Opal Books, Kathleen’s website, and Amazon.
http://www.kathleenkaska.com
http://www.blackopalbooks.com
https://twitter.com/KKaskaAuthor
http://www.facebook.com/kathleenkaska
Posted by E. B. Davis at 12:00 AM

Stepping back and putting a book on the back burner was the right thing to do. But what is impressive is that you went back, rewrote it, and got it published. That's hard to do. Many of us get enthused about a book, but when it goes south, we let it sit without doing due diligence. It's a waste of all the effort we put into those book if we don't go back and dig in again. You've set a great example. Will this book be the first in a series or is it a single title?

I think the temptation for many people today is when they can't find an agent or the agent can't find a publishing contract is say the problem is the publishing world today and then self-publish the manuscript.

I had a similar situation with the first book in my Seamus McCree series. In my case it wasn't a preaching problem, but an immaturity in writing style. The book was simply not yet deserving of publication. I brought the manuscript back out of the virtual bottom drawer after several years, rewrote, polished and the result was Ant Farm, which won a publication contract from Kindle Press after going through the Kindle Scout process.

Congratulations on your latest publication.

congratulations on publication! I look forward to reading your new book.

We have retired greyhounds in the neighborhood, from a Cincinnati rescue group. They're real couch potatoes, agreeable to a daily walk but that's all. They need to wear jackets against the winter cold. So sweet and gentle.

Thank you, Kathleen, for joining us at Writers Who Kill. You make an excellent point about a manuscript not being ready. You, however, were given a reason for why it wasn't quite ready. So often writers receive a series of rejections and don't have a clue why and can't address the problem.

It is so sad how our animals are treated. A few years ago, I read the book "Practically Perfect" (not a mystery) by British author Katie Fforde, about the rehoming of greyhounds. It made me aware of the plight of these animals.

Kathleen, I've heard about greyhounds being overworked and then when they get too old ending up in rescue places. I think the same thing happens with many race horses. Although it's outlawed there are the rooster and dog fighting events that still go on. Hopefully, they're not as common now. I remember passing a bunch of dog houses with a rooster attached by a rope or leash to each one. The only reason anyone would have that many roosters would be for fighting. Fortunately, they disappeared a few months later so the owner must have been found out. As an animal lover, I'm glad your book finally got published and I look forward to reading it.

Hi Kathleen, congratulations on your publication and kudos for your work with the greyhounds. A family in our neighborhood rescued one and he is a gentle creature.
I was fascinated by your book's selection by the largest book group in the country. I'll have to google to find out how big!

Congratulations on your publication and your persistence in rewriting and polishing the story until it was ready!

Thanks for reminding us all that we need to bide our time with our manuscripts, and many of them will benefit from being revisited later.

One of our neighbors has three rescued greyhounds. They are handsome, elegant creatures, all female. Vinny, our male dog (who has lost his companion dog in the last few months) is smitten with them. He practically goes into a trance when we encounter them. A distinct upgrade from the stuffed Rottweiler who he keeps on his bed and upon whom he showers affection.

Thanks to everyone who read my post and commented. I still have to remind myself not to rush my manuscripts out the door. After working on them for months, even years, I'm eager to see them in print, though. Run Dog Run is the first in the series. I don't have a release date for the second one, A Two Horse Town. Gloria, this story is set in Montana and involves saving a herd of wild horses. Number three is finished and simmering. To all of you who have, or know someone who has greyhounds, you know how loving and gentle they are. A portion of sales from RDR go to the Greyhound Project. Thanks again.

It's a good practice to let a manuscript rest before sending it out, but it's equally important to do diligent research when writing a novel. Not only does it add authenticity to your pages, but it gives the author moral and historical authority to represent a controversial subject. Kathleen, I applaud you for both practices, and I look forward to reading this novel! --Saralyn Richard

Thanks, Saralyn, Sometimes being patient pays off.

Thanks, Writers Who Killer, for having me as a guest!