The Sherlock Holmes Book: A Review and a Warning 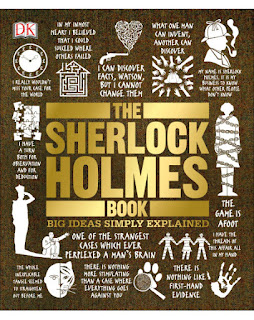 I was browsing the New Books shelves at the library when the spine of a book caught my eye. Gold letters on a Harris Tweed background proclaimed THE SHERLOCK HOLMES BOOK. A bold invitation from Dorling Kindersley Publishers, known for their fact stuffed books for kids. I pulled it from the shelf, intending a quick flip through. Before I knew it, twenty minutes had passed. This book, while certainly appealing to younger readers, is a feast for all fans of the great detective.

The Sherlock Holmes Book is part of DK’s Big Ideas Simply Explained series, which also includes books on Shakespeare, Philosophy, Economics, and Politics. The book is chock full of historical, social, and scientific background for the Holmes stories.

It's also full of spoilers.

The book begins with a short biography of Sir Arthur Conan Doyle and then continues with biographies of Holmes, Watson, Moriarty, and Lestrade.

The next section, the main part of the book, moves on to the tales themselves, all four novels and 56 short stories, devoting a few very readable pages to each. This section is delightful — but dangerous.

Delightful because of the broad ranging facts and intriguing historical tidbits that the editors share. Dangerous because these sections are rife with spoilers. The introduction states that this book is an “introduction” to Sherlock Holmes. But this book should only be read by those who have already enjoyed the tales. It’s stuffed with info graphics and information, but also spoilers galore.

For those who have read the stories, and especially for writers, the way the stories are broken down to their essentials, practically to their outlines, is intriguing and illuminating. In many sections, we see each clue and follow Holmes' fascinating trail of deduction. But if you plan to give this to someone new to the Sherlock stories, be sure to give them a book of the tales, also. As any reader knows, part of the fun is trying to solve the mystery yourself.

Among the fascinating facts you’ll find in the book:

In Victorian London, there was a notorious all female gang called the Forty Elephants. The gang was headed by a “queen” and led a successful shoplifting operation up until the 1950s.

At one time laudanum use was so widespread that it has been called “the aspirin of the 19th century.”

Conan Doyle never specified exactly what type of hat Holmes wore, but Sidney Paget, the illustrator of so many Holmes tales, provided the deerstalker since it was his own favorite headgear.

At a dinner party hosted by the publisher of Lippincott’s Monthly Magazine, Conan Doyle and Oscar Wilde were both asked to write a mystery for an upcoming edition. Wilde wrote “The Picture of Dorian Gray" and Conan Doyle wrote “The Sign of Four.” That publisher had a nose for talent.

Each chapter begins with a quote. Is there a character more quotable than Sherlock Holmes?

“You see, but you do not observe.”
“There is nothing more deceptive than an obvious fact.”
“You know my method. It is founded upon the observation of trifles.”
“Danger is part of my trade.”

The book is rounded out by sections about the Holmes films and television shows, Holmes pastiches, and Conan Doyle’s other works.

A highlight of the book is the introduction by Leslie S. Klinger. In a book filled with graphics, snippets, flow charts, timelines, maps, facts, and factoids (no matter how fascinating), Klinger’s graceful foreword puts Holmes, Conan Doyle, and the entire Sherlock Holmes phenomena into context, fulfilling the “big idea” promise of the subtitle.

Recommendation: A fun addition to the library of those who can’t get enough Sherlock and have already read the stories. I just wish the publisher would put a SPOILER ALERT sticker on the cover.
Posted by Shari Randall at 12:00 AM

What fun! I periodically browse in my annotated two volume Sherlock Holmes.

I'm a big fan of Laurie R. King's Sherlock Holmes and Mary Russell books. The first one in the series is THE BEEKEEPER'S APPRENTICE. She's written over twenty of them. When I was teaching third grade, I drew and painted a picture of Sherlock Holmes on poster board and cut it out and put it up on my wall and started The Sherlock Holmes Detective Club in which partners would read a mystery from my book shelves filled with books for their age. In advance I bought duplicate copies for them to read wherever they chose to sit throughout the room. They also had a work sheet to write down who they thought might have committed the crime (no murders in these books). They were to read one or two chapters a day in the half hour I gave them in the afternoon. Whenever a pair finished their book, their names were put up on the wall by the picture of Sherlock Holmes.

It sounds like a great book for a mystery writer. My and and I have read all the Sherlock Holmes stories.

This sounds like a terrific book to read if you want further discussion of one of the stories or for an explanation of something you may have have fully understood in the story. I've sometimes come away from a book with "Huh?" about something. Thanks for reviewing it. And since I haven't read or seen televised all of the stories, I'll be careful about spoilers.

Hi Margaret, I had a feeling I'd be surrounded by folks who have read the stories. I have my Holmes anthologies somewhere in one of these packing boxes.

Gloria, once again I wish I could have been in your classroom. You had such fun and creative opportunities for your students. I also love those Laurie King books, but always thought Mary Russell was too young for Sherlock.

Hi Warren, then you'd be safe reading the book!

Hi Grace, The book is wonderful for those "huh?" moments. It is so rich in detail - really wonderful for putting things in context and illuminating Sherlock's deductive process.

Love it, a Sherlock handbook. What could be better.

Fun! Sounds like it would be a terrific addition to my SH shelf!

Sounds like a "must have" for those of us who love Sherlock Holmes!