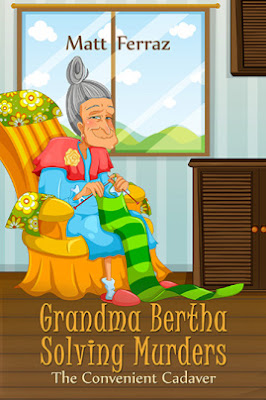 Matt Ferraz contacted me for a book review of his novel, The Convenient Cadaver (Grandma Bertha Solving Murders), a cozy English mystery. His book description hooked me. I didn’t promise a review, but I also didn’t turn down his offer of a free copy.

After reading the mystery, I had questions and decided to interview him about the book—written while he was getting his master’s degree in biography, a major I didn’t know existed but is available in England. His undergraduate degree is in journalism. The Convenient Cadaver is his third self-published mystery—quite a feat—keep reading and you’ll understand why.

Matt—I find it remarkable that you not only wrote this book during graduate school (when most of us were trying to grapple with our school work) and did so at a relatively young age, but that you also wrote an English cozy and are a native of Brazil. Had you read a lot of English cozies? Were you fluent in English?

In Brazil we have basic English lessons at school, but apart from that I'm self taught. I've always preferred to watch movies with subtitles rather than dubbed in Portuguese, as most of my friends did. That helped a lot. And yes, I've read lots of English cozies, as well as other genres, in their original language. I'm also fluent in Italian and a bit of Russian.

Did you write the book in Portuguese or English?

The book was fully written in English. I prefer to write all my literature in that language, for the Brazilian publishing market is sadly very poor. We have great writers and a rich literature, but it's almost impossible for a newcomer author to be published and make some money out of it.

Although your plot is twisty and enjoyable, the book is character driven. Had you studied the mystery genre?

Yes, I've done a lot of research on the genre. Mystery novels are my favorite kind of literature ever since I learned how to read, so I'm familiar with it. But I wanted the book to be not only about a murder mystery, but also about this family relationship with an older relative. I was inspired by my own relationship with my grandmother. In fact many of Grandma Bertha’s lines are quoted verbatim from her.

Grandma Bertha is an old woman who still wants to do something memorable with her life. She lives in a remodeled garden shed at her son's backyard with her three dogs, and loves to watch horror movies. Even though she's funny and witty, I think there's still some sadness to Grandma Bertha, for her life didn't go the way she expected. When she sees a chance to fix that, she grabs it without thinking twice.

Grandma Bertha lives with her son, Todd, and his wife, Lydia. All is not well between Bertha and Lydia. In the opening paragraphs, readers know of Lydia’s distaste for Bertha’s three dogs and that Lydia requires a glass of sherry prior to visiting Bertha at the converted garden shed she lives in behind the main house. Often daughters-in-law and mothers-in-law don’t mix well, but Lydia seems especially picky. At one point in the book, Lydia and Bertha discuss the case over a glass of sherry. They even seemed to be working together—giving me hope—but Lydia reverted to form. Is Lydia a hopeless dullard?

If you think about it, Lydia is 100% on the right. She's a middle-aged woman who gave birth a bit late in her life, her husband is desperately trying to get a promotion, and she has to deal with her mother-in-law who she's not fond of. She has a lot to pull through, and the idea that a murderer could be stalking her family drives her over the edge. I really don't blame her for being such a pain in the neck.

When the body of a young woman is found by the three dogs and subsequently by Lydia, what is Grandma Bertha’s motivation for solving the murder? Does she have any experience with investigating?

Many years ago, Grandma Bertha had the chance of helping the police with a murder case, but didn't do it because she was afraid to be wrong. Now she feels it's her obligation to help the police with this one.

Grandma Bertha seems a natural at asking suspects questions, but she actually relies on her considerable life experience to get the case facts. Although the characters are very different in personality, did you base Grandma Bertha on Miss Marple?

Yes, mostly on Miss Marple as portrayed by Margaret Rutherford, who's my favorite actress. Those movies are very different from Agatha Christie's original novels, but are still a ton of fun to watch.

In which POV did you write the story and why did you choose it?

I wrote in multiple POVs in this story, but the important thing is that I wanted the whole action to happen inside the Hepburn's home, including the house, the backyard and Grandma Bertha's shed.

Why would Lydia and Todd make fun of Grandma Bertha trying to solve the crime? Doesn’t Todd know his mother is crafty and smart?

Todd is another character with too much to deal with. He's afraid to stand for himself, so he takes his wife's side because she's stronger than he is.

After so many years investigating crimes, Inspector Shaw is convinced that even the smallest and apparently silliest details may make or break a case. That's why he's open to hear what Grandma Bertha has to say. He doesn't want to dismiss anything that could possibly help him catching the killer.

Your characters transform from the beginning to the end of the book. What’s next for Grandma Bertha?

The next Grandma Bertha book will be a collection of short stories, which I hope to release in 2018. Right now I'm very busy ghosting some projects, but I will hopefully be able to release this in the first semester of next year.

Are you a beach lover, Matt?

I live far away from the sea, so every time I get the chance to go to the beach, it feels like a special moment. The same is true for Grandma Bertha. 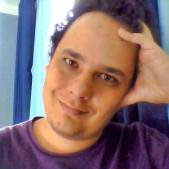 The Convenient Cadaver by Matt Ferraz


When Grandma Bertha moved to her son’s place, she brought along her three dogs, several cases of beer and many, many Horror film DVDs. While her daughter-in-law insists on the idea of sending Grandma Bertha to a retirement home, a dead girl with three bullets on her back appears near the house. Once in her youth, Grandma Bertha let a murderer escape for not trusting in her own detective abilities. Now, armed with her wit and wisdom, she decides to solve that crime before the police. Could this crazy dog lady be a threat to a cold-blooded killer? And for how long can the family stand that situation?
Posted by E. B. Davis at 12:00 AM

Matt, I forgot to ask - are there any Brazilian cozy mysteries?

Fun interview! Grandma Bertha sounds like someone I'd thoroughly enjoy. :)

Writing in a second language is quite a feat.

Congratulations on your books and hope you publish many more. Grandma Bertha sounds like a winner.

I think this sounds like a series I would love. Good interview.

What an accomplishment to write a book, especially in a language that is your second language. Congratulations.

Thanks, Grace! It wasn't easy!

What a fun book, Matt! All the best.

This sounds like such fun! I'll have to look into Grandma Bertha.