An Interview with Kellye Garrett by E. B. Davis

“Hollywood is high school with prettier clothes and better lunch options. You study scripts,
not textbooks. Try out for roles, not varsity. Take screen tests, not math exams.
And you vote for Oscars, not prom king.”
Kellye Garrett, Hollywood Homicide, Kindle Loc. 678 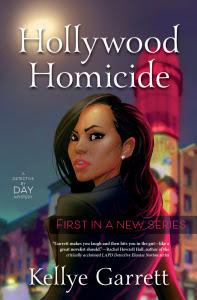 When I contemplated reading Hollywood Homicide, it brought to mind other mysteries set in Hollywood that weren’t the best reads. So when I picked up the book and found that I didn’t want to put it down I was surprised until I realized why. Kellye’s book is character-driven. Her main character, Dayna Anderson, is an enjoyable gal who could be your best friend. Some of her friends have skewed values bent on obtaining stardom, but then readers consider the Hollywood venue and adjust to the realities of Tinseltown.

Kellye utilizes her characters’ traits to work in some interesting plot twists to culminate in an unexpected ending—even the very end—wrapping up the backstory. Hollywood Homicide is the perfect beach read even if you prefer to be at the pool or (I shudder) the mountains.

Main character, Dayna Anderson, was the star of a popular TV commercial. For a time, she had recognition, popularity, and money. Not so much now. Why didn’t she save her money? Is the rags-to-riches-to-rags a typical Hollywood scenario?

The entertainment industry isn’t known for job security. You can get fired tomorrow and not work for years. That’s what happens with Dayna. When we meet her, it’s been 18 months since her spokesperson contract ended. She assumed she’d find her next gig pretty quick. She was wrong. So although she did indeed save her money, her savings is pretty much wiped out at this point.

Dayna, along with three friends, witness a hit and run accident while drunk. What motivates her to solve the crime?

Desperation. Her parents’ home is going into foreclosure. Her initial attempt to save it backfires when she realizes she’s dealing with a shady loss mitigation firm. Needing money fast, she thinks if she can remember the car then she can share that information with the police and get the $15,000 reward they’re offering. Her intent definitely isn’t to solve anything but, of course, she ends up getting more and more involved in both the victim’s life and the case itself.

Is the reason for Dayna’s recent weight gain due to depression about her “lost” acting career or is it a reaction to high school friend (and her heart throb) Omari Grant winning a major part in a TV show?

She had to maintain a certain, nearly impossible weight during her TV commercial spokesperson gig. On the surface, she’s eating everything because she’s making up for essentially being on a diet for years. (Julia Roberts has a great line about that in Notting Hill.) It’s her way of saying “eff” you to Hollywood. Deep down, depression probably has a lot to do with it too though. It’s definitely not related to Omari’s success.

Although Dayna’s friend Sienna got her money from a rich ex-husband, her friend Emme earns her living off the Internet. How does Emme do it?

That is one of the most-asked questions in Hollywood. You see people chilling in a coffee shop at 11:00 a.m. on a Wednesday without a care in the world and you want to ask them, “Umm, how do you pay for this?”

In Emme’s case, she was a child star who I based off the idea of, “What if one Olsen twin decided to quit acting after Full House and the other became the biggest star in the world?” So she has savings from her acting career way back when. Otherwise, she plays online poker for cash and does a bit of editing work. Living very frugally and barely leaving her house help too.

Why does Dayna call the room she stays in at Sienna’s condo a “bloset?”

It’s a bedroom turned shoe closet turned bedroom, which makes it a bloset! The backstory is Sienna converted her spare bedroom into a closet right before Day moved in. (Think how Foot Locker is set up but with stilettos. Amazing, right?) They decided to keep them there because shoes make Day happy.

While investigating, Dayna meets “…homeless serial killing fashionista who loved playing in traffic” (Location 400) Aubrey S. Adams-Parker. Is he a private detective or is he after the reward, too? 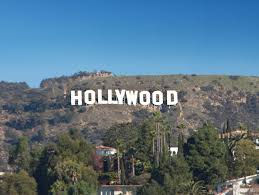 At first Day’s not sure what Aubrey is. Her best guess is he’s a private investigator, but he never confirms it. A little later in the book, we get a bit of his backstory so I don’t want to say too much. But I will say he’s definitely not doing it for the reward. In fact, he’s kind of appalled that Day is, which puts them at odds when they first meet.

People halfway recognize Dayna from her commercial days. Does that recognition help or hurt her investigation?

At first, she finds it more of an annoyance than anything else. Because she wasn’t some A-list star and it’s been awhile since she’s been on television, she’s more familiar than recognizable. Everyone thinks they know her from high school! It’s more of a funny runner throughout the book than anything else.

What are Hollywood “Hand-Outs?” Is this the reason why Dayna won’t ask her wealthy friends for financial help?

A Hand-Out is someone who wants something because you’re suddenly successful or have come into some money. Basically they want a hook-up, whether it’s investing in their idea or passing along a script to your agent. Emme and Sienna both helped Day out before the book starts. Emme loans her money to help with her parents’ house and Sienna lets her move in rent-free. So, yes, at this point Day doesn’t want to take advantage of either of them.

Emme talks text language. Is this due to her being a geek or is it adolescent?

Emme’s love of acronyms speaks more to how much time she spends online. Every time she does leave her house, someone mistakes her for her twin—and comments on how bad she looks in person. As a result, she barely leaves home. Her main communication is through typing, whether it’s texting friends or a poker game or something else. So that way of speaking carries over to her real life. Usually Day knows what Emme’s saying but sometimes even she needs a translator.

“Sienna played on her cell as she spoke. You had to love twenty-first century interactions. No one looked at each other anymore.” (Kindle Location 876) Have human interactions changed or is today’s cell phone the equivalent of the 1940s cigarette, enabling a distraction for prickly subjects?

Probably both. There are a few videos online of the Paris Hiltons and Kim Kardashians pretending to be on their phone to avoid paparazzi questions. On the flip side, you can be at a dinner with three of your best friends and I guarantee at least one is glancing at his/her phone at all times. I try not to do this but I will definitely whip out my phone to Google something we’re discussing or show a funny meme I saw.

TMZ is a well-known entertainment website that breaks a lot of entertainment news. They also have a television show. I always say that I don’t believe anything until TMZ reports it. They broke Michael Jackson’s death in 2009. More recently, they were among the first to report the names of Beyonce’s twins.

Is there such a thing as a sweet potato cupcake? Does it have cream cheese frosting?

Yes, this wonderful thing not only exists it does indeed have cream cheese frosting. I’m sure several people make them (as they should) but the ones in Hollywood Homicide are from Southern Girl Desserts. (http://southerngirldesserts.com/) I actually went to college with one of the owners.

What’s next for Dayna?

I just turned in Detective by Day Book 2 to my editor and I’m figuring out the story for Book 3. I tend to base Dayna’s cases on real-life Hollywood crimes, so right now I’m researching to find one that fits. I have a couple of ideas, but if there are any Hollywood related crimes you’re fascinated with, please let me know! You might find it in Book 3. (I’ll name a character after you as a thanks.)

NJ and LA—are you a beach chick, Kellye?

I like to think that I am, but I’m not. I’ve been back in New Jersey for six years now and have yet to make it to the Shore. 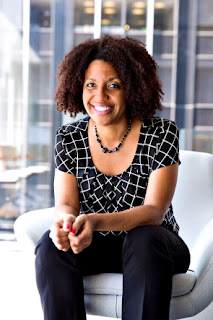 Jacket Blurb of Hollywood Homicide by Kellye Garrett:
Dayna Anderson doesn’t set out to solve a murder. All the semifamous, mega-broke actress wants is to help her parents keep their house. So after witnessing a deadly hit-and-run, she pursues the fifteen grand reward. But Dayna soon finds herself doing a full-on investigation, wanting more than just money—she wants justice for the victim. She chases down leads at paparazzi hot spots, celeb homes, and movie premieres, loving every second of it—until someone tries to kill her. And there are no second takes in real life.
Posted by E. B. Davis at 12:00 AM

What fun to read about a new setting in a mystery. I'm looking forward to this.

Looks like a winner! Excited to read your debut novel.

Kellye's book as a fun read with insider information about Hollywood, the entertainment industry, and the populace thriving in the creative environment--some artists and some business types. Her character-driven mystery was not only fun, but main character, Dayna, will be a memorable friend I'll be glad to return to in the next book. Which will be when, Kellye?

Fun interview. Congratulations, Kellye, on the publication of your first book. May it be the first of many and that they all become best sellers.

Thanks everyone! Hope you enjoy it.

The second book, Hollywood Ending, will be out next summer!

A fascinating setting for a new series! Congrats on the publication, and best of luck with the series!

I really need a bloset! Can't wait to take my copy to the beach. Best wishes, Kellye!

Thanks KM And Shari, everyone needs a bloset!