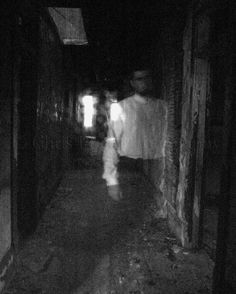 This might be a ghost story. There was nothing unusual about the beginning. A woman came to the agency I was working for asking for therapy. She described her life history. It was clear that she had a terrible life mostly due to her continuing illicit drug use. She said she had tried repeatedly but could not stop using.

All of her children except the youngest had been taken away due to her drug use. As the result of a legal hearing, she was subject to unannounced urine testing with the understanding that if she tested positive again, her youngest child would be removed from her home. She was on the verge of losing her job. She hated her boss. But she needed the income the income her job provided. Her work attendance had been erratic. On Mondays she was often so hung over that she could not work. Also, her car was old and unreliable. She lived in public housing in a dangerous building in the worst part of town. She had applied for a transfer to safer housing years earlier but the waiting list had hundreds of names on it. Feeding her addiction left her with barely enough money to buy food.

After listening to the recital of problems, I asked why she wanted therapy now. The problems she mentioned were chronic. I knew there had to be an immediate reason for her to come in. After some hesitation she said one of her sons had approached her about two months ago after years of refusing to see her. He told her she had been a terrible mother, leaving her children in jeopardy when she went off to get drugs, being too stoned to take care of them and disappearing for days when she binged. He said he loved her anyway and he wanted to help her get off drugs. They started talking. She felt hope for the first time in many years. Then he was shot and killed, an innocent victim of a drive-by shooter targeting someone else.

I said that was truly terrible. And I asked again, “So why come in now?”

“It’s my dead son,” she said. “Every night he stands over me, not saying a word. I know he hates me and blames me for everything he had to go through.”

I asked if he had done anything like that when he was alive. She said no, on the contrary, he’d been loving and supportive. He was seriously trying to help her get clean.

I said, “I wonder why he has changed so much just because he died. He hasn’t said anything. He might be there for the same reasons he restarted contact with you when he was alive. Do you want to invite him to join us in the office so you can ask him?”  She refused and stormed out of my office.

At the next appointment she said “I asked my son why he came to see me. He told me he still loves he. He wants to help me.” She said he insisted that she had to stop using drugs. Night after night he said the same thing. Eventually she wore down, promised to cut back and finally gave him a date in the future when she would stop using entirely.

Then things started happening. The housing office called to offer an apartment in a safer place. Out of the blue, her sister called her to say she and her husband had bought a new car. Did my client want their old car? She started to show up to work on time, not hung over and she got a lot more done. She was no longer threatened with being fired. After some time she got so annoyed at her boss for putting her down that she told him off. To her surprise, he stopped insulting her.

She kept her promise to her son to stop using. He continued to show up, encouraging her and acknowledging the changes she made.

She met the goals she set for herself and graduated from therapy.

Please note: in this account I have simplified events and condensed the time frame, but it is entirely truthful.

I never saw her son. So, was her son a ghost? Was he angel? Was he an auditory and visual hallucination? Part of her mourning process? Or was his love for his mother so strong that a little thing like dying made no difference?

Beautiful story. Years ago I would have said it was a fragment of herself, the part that really wanted to change, creating something to hang on to. Now I'm not so sure.

Good story, Warren. Stories don't always need to have a clear-cut ending. Stories that end with a question are often the most haunting--with or without ghosts.

Great story, Warren. Whether or not his ghost truly visited or she had imagined it, he still helped her. I think love can transcend time. It can't be destroyed, which can be problematic or a Godsend.

Fascinating story, Warren. Thanks so much for sharing!

Great story! I know her son was with her during her recovery.

What a fascinating story, Warren. You could expand on this and make it a book. However, as a therapist, you probably have to be careful what goes into your fiction writing.

Warren, this is a very interesting story. Sometimes, the unexplained can't be explained.

I agree with Jacqueline Seewalds' comment, stories don't always have to have a distinct conclusion. Stephen King has showed us that over and over again :) I enjoyed this...and, as an aside, I believe in these type of things. In this case, the "coincidences" that follow are too "coincidental", they're all following a flow. I think if you perceive the flow, you know the guidance was real...

On another note, congratulations on your latest release! I'm trotting to Amazon to have a look :) Lo

Thanks KB, I'm not sure either.

Jacqueline, I agree. So much of life is uncertain.

Thanks EB, It sounds trite but I believe love never dies.

Thanks Margaret, Somehow her son was with her.


Grace, You're right. I try to be careful that noting I write identifies a particular person.

Loretta,Thanks for your kind words.

Warren,
What a wonderful story. While I have never seen a ghost, I sometimes write them into my books. I think it's possible that your story played out just as the woman told you it did. And the great thing is, she got off drugs and turned her life around.

Great story, Warren. When I moved into my old house, I'm sure the elderly man who lived here
before was still here. I saw things out of the corner of my eyes. When my son was fixing it up for me before I moved in, he was in the basement with a guy helping him when they both
heard footsteps. He called up asking who was there and then went up and no one was. When I moved in, my daughter heard two guys talking as she started dozing off after working a night.
That happened more than once. The same weird things happened in my grandparents farm house after both had died and my cousin lived there, so yes I believe. My son came to me in a dream and told me Heaven was wonderful and he was heading up into the mountains on a train. I didn't tell that to anyone because it was a dream. However, the following summer, my niece was at a 4H camp and met a girl my son had dated briefly before he died. She and my niece started talking when they found out my niece's cousin dated this girl, and the girl told her she had a dream John had come to her. I had not told anyone about my dream including this girl. John appeared to my other son one day when he was lying on my bed. He stood there smiling at Joe for quite awhile until he started to fade away. This was in less
than a month after he died.

I believe there are many things that can't be explained with science or logic. What's wonderful is that this woman turned her life around. Thank you for such an inspiring story.

As Shari says, many things are beyond our understanding.

I'm sure that the parent-child and child-parent bond can survive death.