Nazis and Ku Klux Klan and Aryan Brotherhood, Oh, My! 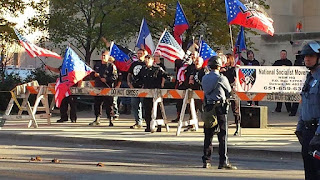 Back in 2013, a gathering of white supremacists and Nazis came to Kansas City to parade in celebration of the 75th anniversary of Kristallnacht, the bloody opening salvo of Hitler's Final Solution. In light of the recent events in Charlottesville, Virginia, I thought it might be interesting to run this again and notice the warning signs of what we're facing today, as well as sound a note of hope in the look at the variety of citizens who came out to oppose them, especially the many young people.

Yes, those are swastikas on the flags you see in that photo. This weekend, the Nazi Socialist Movement, the largest neo-Nazi organization in the country, came to my hometown, Kansas City, for a national gathering to celebrate the 75th anniversary of Kristallnacht with their pals the Ku Klux Klan, the Aryan Brotherhood, and Satan’s Saints, a white supremacist motorcycle gang. 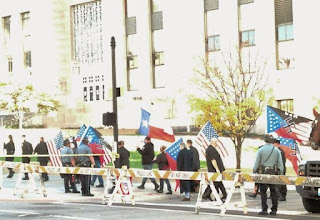 I’m a lifelong activist. The FBI has a file on me from the J. Edgar Hoover days (which puts me in very good company). I’ve been teargassed in antiwar protests and had rotten tomatoes and eggs thrown at me in civil rights marches. I’ve put in my time at trying to make this a decent country for everyone, and as lupus, fibromyalgia, and severe asthma have taken a toll on me and left me needing a cane, I had decided that I was done with going out into the streets to protest or demonstrate. I figured I’d earned my time to sit peacefully at home and finish the book for which I had an impending deadline.

Then the Nazis announced that they were coming to Kansas City. They came to KC in 2007 to celebrate Hitler’s birthday and paraded around in Nazi uniforms. I thought surely others would stand against them, and no one did. So this weekend saw me downtown at City Hall facing the Jackson County Courthouse where the Nazis, KKK, and fellow travelers were supposed to bring over a thousand jackbooted thugs to parade around to celebrate the night their German forebears destroyed Jewish shops, killed many Jews, and started rounding up them (and many other minority groups) for concentration camps to begin Hitler’s Final Solution. 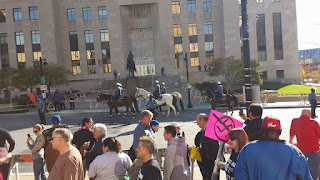 The same politicos who rolled out the red carpet for these Nazis, allowing them all kinds of things that we counter-ralliers were not allowed—bullhorns, ultra-large stereo speakers, microphone stands, and much more when we weren’t even allowed water bottles or purses to carry our medicine (I had to make use of Ben’s pockets for mine)—tried to keep us from protesting against them, and when they couldn’t, organized another rally miles away, effectively dividing the forces of reason for political purposes. So reluctantly, after an exhausting week of work and events every night for my husband’s job, we drove downtown early to set up for one more stand against hate.

Even with the politicians putting pressure on organizations to attend their rally safely miles away, seven hundred people arrived to stand up against the Nazis—ministers, schoolteachers, college and high school students, secretaries, longtime civil rights activists, young veterans of the Occupy movement, active-duty soldiers, grandmothers with their grandchildren, fiery young anarchists, Republicans, Democrats, Independents, white, African American, Latino, American Indian, and a few women in hijabs. What was especially gratifying to me was that the vast majority were young people. 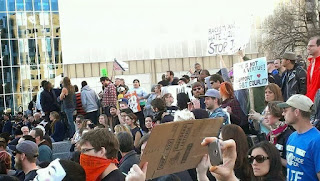 What was not gratifying was that the police were aimed at us and apparently had orders to threaten us with teargas and pepper spray. Fortunately, none was used against us, but that’s why in some photos you will see folks with bandannas or handkerchiefs over their mouths and noses. These were the ones who’d been involved with the Occupy movement and had recent experience of being sprayed with these toxic substances. Also, a little disconcerting was the militarized appearance of the police. About six clearly marked observers for the Department of Justice circulated among us—and may have been the only reason that our peaceful gathering was not attacked by the police, who paid little attention to the Nazis, et al. 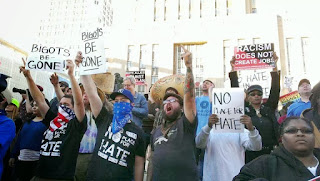 The Nazis and white supremacists only managed to field about three dozen people instead of the thousand-plus they had threatened. When asked later by the press about the low turnout, they said that many turned back, afraid of the publicity that our counter rally had drawn and afraid that they might lose their jobs if they were publicly seen. Some dismissed that as fake excuses, but I’ve seen the membership numbers that researchers have compiled for these organizations, and I know they could easily field that many people. Therefore, I count our protest a success since it inhibited more from coming out in public.

The rhetoric was as awful as you might expect. Talk of putting all but Aryans into “subservience.” Talk of the fun they have arming with guns and going “hunting illegals” at the border, as if it were a sport. Talk of the “judaization” of America and the world and how they will “cleanse” it. But mostly it was the same rhetoric you can hear any day on talk radio or from the extremist politicians who have seized control of Congress. That was the eye-opener. They even played a recording from the 1980s of a deceased leader, and it was basically Tea Party rhetoric with some extra-nasty violence added. It underscored how far to the right our country has slid when the lines the Nazis have been spouting for decades have suddenly become the main themes of powerful elected politicians.

But the main takeaway of the day was the beautiful, diverse gathering who peacefully stood up against the haters and said, “No.” That and the heavy involvement of young people from conservatively dressed yuppie types to the heavily tattooed anarchists who placed themselves in the front lines, fully expecting teargas or pepper spray. I have had my days of depression and cynicism when I look at the way things are going, but I am newly optimistic after this glimpse of the upcoming generation, who, with all their differences, will still stand up and stand together against violence and hate.

Rodriguez is past chair of the AWP Indigenous Writer’s Caucus, past president of Border Crimes chapter of Sisters in Crime, founding board member of Latino Writers Collective and The Writers Place, and a member of International Thriller Writers, Wordcraft Circle of Native American Writers and Storytellers, and Kansas City Cherokee Community. Visit her at http://lindarodriguezwrites.blogspot.com
Email ThisBlogThis!Share to Twitter
Posted by Linda Rodriguez at 1:19 AM

It seems to me that people drawn to hate groups are looking for someone to blame for their lack of success and are totally lacking in empathy.

I saw a photo the other day of WWII American soldiers holding a Nazi flag they captured when they helped free prisoners from a concentration camp. How has it happened that now some Americans embrace that symbol? It beggars belief.

Thanks, Linda for standing up for all of us.

There's plenty of hatred around here, as well as baffled bewilderment about health care. Lead the charge, Linda!

Grace, I think you're absolutely right.

Some WWII vets I know (quite elderly but still very feisty) have told me, "I fought Nazis once. I can do it again if it comes to that."

Warren and Margaret, thanks, but I think it's what every thinking person would do. Look at that satisfying turnout of peaceful demonstrators in Boston.

Linda, I totally go along with everything you said. I think Donald Trump instigated most of this hatred, not that it wasn't already there, but he made it seem as an okay way to think. I still remember how he ridiculed people like the reporter with a handicap and the Gold Star parents, and women. I certainly wasn't a Ted Cruze fan, but how dare Trump say the things he did about his wife! And then calling the immigrants all rapists and murderers. It seems like every time he opens his mouth or tweets something totally inappropriate comes out. He has changed the opinion of so many other countries about our country. I wonder if we can ever have the admiration or support of other countries again. I could write pages and pages about the things he has done wrong and my opinions but it's time to stop now.

Gloria, I agree with you that DJT has given these reprobates permission to move into the mainstream--something many in this country are fighting against. One reason I wanted to repost this was to remind us that they were always there among us, but there was a time when they didn't feel emboldened to come out openly in public. Also, I wanted to point out the closeness of their hateful spew to the Tea Party rhetoric already in the public arena.

Perfect day to post this, Linda. A total eclipse of the sun seems to be threatening.

Like you, it is heartening to me to read of the cross-section involved and of the number of young people. Keep up the good fight.

Kait, I'm less worried about the total eclipse of the sun than I am about the total eclipse of decency and patriotism shown by this administration and the fools and racists it enables and emboldens. If you want to see something threatening, google the VICE reporter who embedded himself with Nazis and white supremacists. Terrifying footage as these people say they need genocide against Jews and people of color to make the world safe for their white babies. That's darn near an exact quote.

After several major steps forward in civil rights for all, we seem to have taken a huge step backward. I'm afraid this is the nature of human progress. I can only hope this setback is a sign to those of us who care that we need to redouble our efforts. It's a long campaign, not a few incidents, and we can't relax our vigilance.

KM, I worry that it's more than a step backward. We're facing major signs of an attempt at authoritarian rule.