Who’s Interviewing Whom? By Geoffrey Mehl 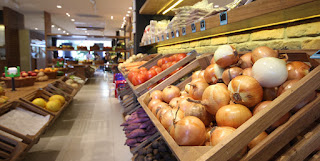 Geoff: Hello and welcome to an illustration of how casual sketches can help develop characters and practice character voice. Today we’re at a local supermarket, interviewing one of our favorite characters, Lucy Tramanian—

Lucy: Hi, everybody! Wait a sec. So here’s the thing. Just once it would be really cool if I interviewed you instead.

Geoff: But you’re the character, and I’m your writer.

Lucy: Ah, so, like being at your beck and call, day in and day, out makes me somehow unqualified?

Geoff: Not at all. It makes you special. Nobody cares about the writer. It’s always about characters.

Lucy: Hm. You’ve got that right. Without us, you’d be staring at a blank screen, sucking coffee, clicking on web pages, checking your sales for about the tenth time of the day.  I know this, because I’m really, really good at hacking, and I’ve been all over your hard drive. But still, c’mon, I’ve never had the chance to interview.

Lucy: How much space have we got?

Lucy: You’re kidding. Sheesh, they must really be on a tight budget. I can fix that with their hosting service, you know. Just a few clicks of the mouse…

Lucy: Yeah, yeah. Okay. First, how come we always do this stuff in the produce department of a supermarket?

Geoff: Because the idea is that when you’re designing a character, you take them out for test drives in innocuous places like, say, shopping for rutabagas. You converse about trivial stuff, you get acquainted with voice.

Lucy: I am so tired of the rutabaga example you use all the time. The entire cast thinks doughnuts and coffee would be better. Even the editors downstairs agree. I mean, like, there’s not even a rutabaga here. Just a bunch of onions. None of us even like onions. Tommy uses them in omelets sometimes, but I know for a fact that Mandy just tolerates it and Charlie and Sergei could care less.

Geoff: So is this some sort of a grievance thing or are you interviewing? 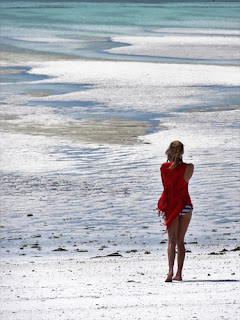 Lucy: Coffee, black, and a doughnut. With pink frosting and sprinkles. Or I cut you loose, and all the
readers are gonna snicker.

Geoff: Can I sigh?

Lucy: Only in third person and then probably in italics. Let’s get some doughnuts, and I promise not to screw up the next scene. Questions—okay, so when did you start doing this stuff?

Lucy: I know, and she’s also a much better writer than you. God, I would just kill to be one of her characters. Well, fictionally, of course.

Geoff: You’d probably have to. With me, you get to do that three-hundred-word-a-minute typing of code while the gibberish just flows across the screen.

Lucy: That is such a lame cliché! Next time, I want to use the delete and backspace key as much you do.  So, I’ve got to know. How’d you come up with me in the first place?  A brilliant flash of revelation? Months and months of careful planning? Based on someone you love and adore?

Geoff: Actually I was stuck on a plot point, knowing one minor character, who was so-so at low-level hacking, could not possibly have set up the theft of that Gulfstream jet.

Lucy: That was sweet, wasn’t it? I’m thinking about dusting off my old Nyx character for the next in the series, the one you dreamed up in that casino scene with Lester Finn.

Geoff: Nyx, the goddess of night. Not bad for a walk-on part that turned into a major character.

Lucy: Yep, that’s true. And I got to point a gun at Tommy in the pouring rain. I mean, how cool was that? He laughs about it now. How we doing on space?

Geoff: Nearly done. We’ve got to leave room for a bio. So there’s just about enough room to say —

Lucy: It’s been very cool, rush right over Amazon to buy the guy’s books, Stray Cats and Nine Lives, which you can get for three bucks each. Like, how cheap do you want it? Plus, make a point of stopping by to our little blog, Vapor Trail, over at geoffmehl.com.  Which, I heard, you’ve turned into a free magazine, stuffed with all the stories we tell. 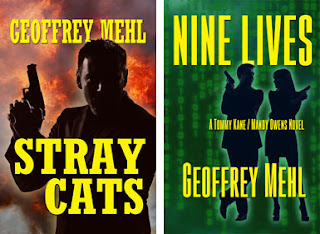 Lucy: Do we get a salary bonus for that?  I mean, these are great doughnuts and the coffee’s not bad for the sort of stuff you find guesting at a blog. But honest, money is handy in our business.

Lucy: Bye-bye! I’d wave, but you can’t do that in first-person interviews. Thanks for reading us!

Director: And... we’re clear. That’s a wrap. Thank you, everyone.

Lucy: You wouldn’t happen to know which way to the green room for Live with Kelly, would you? She does much better interviews.

Geoff: Go out the door, turn right. It’s just down the hall.

Lucy: Thanks. Catch ya later, boss. 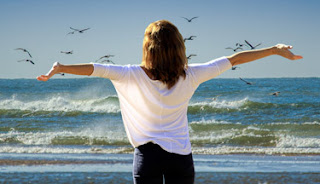 Lucy Tramanian, age 29, aka Nyx, is one of the most feared white hat hackers in the world and also manages the financial empire of Tommy Kane and Mandy Owens. Where she went to school and details about her youth are unknown. Until recently, she resided on an island owned by Mandy in the Bahamas and has control of a private bank in Grand Cayman. Her current whereabouts are a secret. Geoffrey Mehl (older) is her writer, a former journalist and marketing executive who lives in northeastern Pennsylvania.
Posted by E. B. Davis at 12:00 AM

Keep turning those tables, Lucy - there is no doubt you are good at it. What a fun interview! Stay away from the rutabagas by the way. I bought one once, it was Thanksgiving. The recipe sounded irresistible. My husband had to cut the danged thing up on a bandsaw. Coulda used it for a plot point in a holiday murder anthology. Still might. Would you like cranberry sauce with that? Don't mind the lumps...

Thanks -- Lucy's always a fun character to write

My characters tell me what to write too. Heaven help me if I don't listen.

Know what you mean, Warren! One of the nice things about really getting familiar with voice and personality via "nonsense" pieces is that when it comes to the main event, the characters just seem to take over. Half the time I feel like I'm just taking notes, frantically trying to keep up. Thanks for your comment! - Geoff

Can't wait to meet Nyx on the page.

Love this, Geoffrey (and Lucy)! What a delightful conversation. Looking forward to reading your books. :)

I loved this interview, Geoff. I'm going to order your books so I can learn more about your characters.

Thanks to all -- Lucy's one of my favorite characters ever since she bailed Tommy Kane out of a jam and then introduced herself by pointing a gun at him in the pouring rain in Allentown, PA. (Stray Cats)

Lucy says hi to everyone from where she's currently living -- in Providenciales (or Provo as they call it in the Caribbean) where she's bought a small former hotel and turned it into a new base of operations with much better security than she had in the data center on Wall Street. And she's the one who made Mandy Owens welcome as one of the team in Nine Lives.

Nyx reserves a special spot in a very warm location for spammers and cybercriminals, terrifying them for sport.

A fun blog! Thank you.