Into the Water and Thin Air
Margaret S. Hamilton 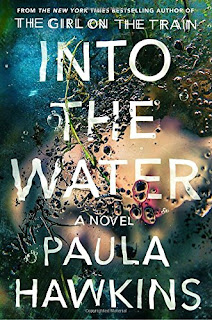 I’m learning about writing point of view: deep or shallow, third or first person, particularly when a plot is constructed using multiple points of view.
Paula Hawkins expands her use of multiple points of view in her second book, Into the Water. She has eleven characters, each speaking in their individual chapters in either first or third person, telling his or her version of two recent deaths in the Beckford drowning pool in the north of England.  The only narrator who appears reliable is the police sergeant, Erin Morgan:
“Seriously, how is anyone supposed to keep track of all the bodies around here? It’s like Midsomer Murders, only with accidents and suicides and grotesque historical misogynistic drownings instead of people falling into the slurry or bashing each other over the head.” (Into the Water, p.129)
I could only make sense of the novel by creating a character list: the dead woman, excerpts from her manuscript about historic deaths in the pool interspersed throughout the narrative, a dead teenage girl, the dead woman’s sister and daughter, the dead woman’s lovers, the dead girl’s adult lover, assorted family members, and the ranking police officer who had a relationship with one of the victims and no business running the investigation.
The characters’ voices are indistinct and blur together, their individual narratives much like the screenplay for Broadchurch as each describes his or her interpretation of what happened to the two recent drowning pool victims. As a group, the townspeople spend an inordinate amount of time walking the path along the river and speculating about what happened. Other than a brief foray to a seaside town, the action takes place in Beckford, but Beckford remains a stage set, never assuming the role of a character.
I re-read Ann Cleeves’s Thin Air as a comparison to Hawkins’s novel. Cleeves uses multiple points of view, but the local ranking police officer, Jimmy Perez, is clearly in charge of the investigation, in conjunction with his off-island superior officer and capable local sergeant.
Cleeves sets the tone with her first paragraph:
“The music started. A single cord played on fiddle and accordion, a breathless moment of silence when the scene was fixed in Polly’s head like a photograph, and then the Meoness community hall was jumping.” (Thin Air, p.1)
And we’re off: a murdered visitor; a child ghost, “Peerie Lizzie,”; the dynamics and backstory of a group of university friends who have come north for a hamfarin’ wedding celebration; and the past history of the island residents examined in light of the recent murder. It’s always clear who the players are. The police are careful to modify their local speech for the benefit of the “soothmoothers” from the South.
Perez sifts through the bits and pieces of the case, as he considers both forensic evidence and his knowledge of the residents and culture of Unst, the northern-most of the Shetland islands. Though his perspective is filtered through his grief following the violent death of his fiancée and subsequent guardianship of her child, he exhibits a quiet knack for extracting the truth from the pool of suspects.
Cleeves often uses two different points of view in one chapter, always in third person, as she advances the plot. Perez ponders and dismisses possible scenarios as his team investigates both local residents and visitors to the island. After a second murder, Perez focuses on a local resident, who retaliates with another act of violence before the final resolution.
As in all of Cleeves’s books, the geographic location of the Shetland islands becomes a character: the restless North Sea, the endless summer daylight, the mists and fogs, the cliffs and lochs, and expanses of treeless sheep pasture. A place where folk legend becomes fact, a place where murder is extraordinary, but occurs for the most common of motives—the love of a parent for a child.
Plotting using multiple points of view is difficult, particularly with a complicated backstory folded into the narrative. A character’s credibility is always in question. In Thin Air, Perez and his team are part of a series character arc, both as individuals and as a team. We learn and grow with them as they solve new cases in each book.
Who committed the murder, and why? In the stand-alone Into the Water, only Hawkins knows for sure, as she guides us through a morass of deceit and corruption before a stunning, climactic revelation in the final paragraph.
Writers, do you use multiple points of view in your books and stories? Readers, do you enjoy a plot constructed of multiple points of view, or do you prefer a single narrator? 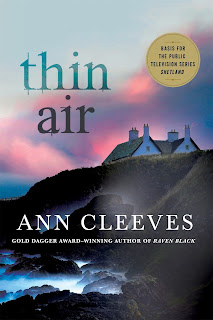 Did the voices become clear, Margaret? Eleven voices would be too much for me, as a reader, to want to handle unless they were very distinct and crisp. I enjoy multiple viewpoint books as a reader if the technique serves the story and if the voices are sharp. The Hawkins book seems wanting. The Cleeves book sounds much more satisfying.

As a writer, I too am in the process of learning how to effectively use multiple points of view. The technique is not easy to do well. It takes a deft hand and practice to be both seamless and effective.

If I need a scorecard to keep the characters distinct in my mind, then I’m on to another book. I’ve read excellent books with rafts of characters, each so distinguished I know who is who in an instant or two, so I know it can be done. If the author doesn’t care to or is incapable of writing that way, then I don’t feel obligated to read their works. Paula Hawkings sounds like a pass to me.

I enjoy multiple points of view, but that's a tricky thing to do well. Sounds like I may stick with Ann Cleeves instead - she's a terrific writer.
Thank you for the warning about the ending of Into the Water! Sometimes I'll browse the entire book before deciding to buy it, reading a paragraph here and there, instead of just reading the beginning like normal people. I'd hate to see that last paragraph before reading the rest of the book!

I write in multiple points of view, but not a lot of POVs. Mostly they are my main characters and some that are important to the book. I have a list of all the characters at the beginning of my books, at least the ones that appear more often. I have a lot of readers tell me they like having that character list at the beginning. G.M. Malliet does that in her mysteries,too.
Elizabeth George writes with multiple points of view, too, and I love her books. I like being able to know how and what others are thinking.

As I blogged about earlier in "Flight of Dreams" by Ariel Lawton, almost every chapter was of a different character, but they did return so it wasn't only one chapter per person. I think there were only five POV's, and some paragraphs were just setting up the background of the Hindenburg.

I don't have a preference for single or multiple points of view as long as it's well done. And some authors handle it very well indeed.

When I write, I tend to go with a very strict single POV, either 1st person or a very close 3rd.