Bringing a Character to Televised Life

Let me begin by saying I am an unabashed, wildly enthusiastic fan of Dana Cameron and her Emma Fielding archeological mystery series. My fandom is of long duration, going back to when the first Emma Fielding novel, Site Unseen, was initially published.

For the purposes of full disclosure, I met Dana Cameron at Malice Domestic when we were standing in line to get Elizabeth Peters’ signature. Dana asked me to take her photo with Peters. When I returned home, I read Dana’s novels, devouring each as it was released and being tremendously sad after the last was published. Although, I’m glad to say Emma has appeared in short story form since the end of the series.

Dana and I stayed in contact, meeting each year at Malice. I recommended her novels to my book club and moderated a panel she appeared on at the South Carolina Book Festival. The year she served as Malice’s Toastmaster, I attended the banquet for the first time and sat at her table with Frankie Bailey, Toni Kelner, and Charlaine Harris, an experience I’ll never forget.

I love Dana’s Fangborn stories and her dark colonial noir with Anna Hoyt, but Emma Fielding remains a favorite. And, it’s not just because Dana used my name for a young karate student character in Ashes and Bones, although I did give copies of that book to everyone I knew for Christmas the year it was published.

This year, Dana has experienced the delight of having her Emma Fielding novels reach new audiences through a movie on the Hallmark Channel, an organization known for consistently producing quality mystery programing. 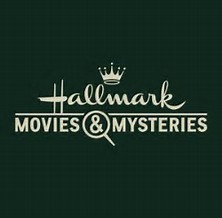 On social media and Dana’s website, I followed the project’s swift development. In a matter of months, filming began, and Dana had the opportunity to visit the set and meet the actors and production staff, which included such film-making veterans as Douglas Barr (familiar to viewers for playing Howie Munson on The Fall Guy) as the director and Kellie Martin (an actress who has appeared on numerous TV programs, including Life Goes On and ER) as producer.

I don’t have cable, but a good friend does. We eagerly planned a viewing party and set up with popcorn and phones ready to tweet as the credits rolled.

How thrilling to see Dana’s name, listed not only for having written the novel, but as an executive producer! The tweeting got a little intense.

Now, let’s face the $64,000 question: how did the teleplay compare to the novel? I think it’s reasonable to say they were offspring of the same mother and each deserving of its own love.

Certainly, there were differences. Courtney Thorne-Smith (known for her roles on Melrose Place, Ally McBeal, and According to Jim), who played Emma, was older than the character in the books and a blonde instead of a redhead, but she conveyed with conviction Emma’s tenacity in getting to the bottom of an issue, her fierce love of archeology, and her eagerness to teach her students.

In the dramatization, Emma got a love interest in the detective investigating the case. I have to say I missed Emma’s husband Brian, who appears in the novels. He’s often in the background, but always provided support and a reliable sounding board.

The movie did maintain Emma’s archeological mentor, her grandfather in the books and father on screen. As in the books, he is deceased before the start of the story, but remains an important motivator as does his research about a colony in Maine speculated to be older than Jamestown. It was a little disconcerting to know from the publicity that the movie was shot on the Canadian west coast, but it did offer some truly beautiful scenery. And, the Maine flag was raised at the building serving as the local police station. 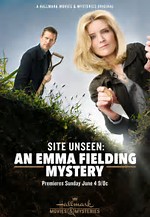 Perhaps the thing I missed most from the novels – yet understood why it was eliminated in the movie – was the “grittiness” of the excavation scenes. I still remember vividly Dana’s description of Emma returning to her lodging from the dig, disrobing, and jumping into the shower to rid herself of the dirt and sweat from the day’s work.

In the movie, all the actors wore stylish jeans, leather jackets, and knelt on pads when working in a pit. The grueling nature of the work was completely missing, but the joy of discovery was clearly conveyed. Perhaps the nicest technique in the movie was showing how Emma visualized the complete artifact after coming across a shard remnant. 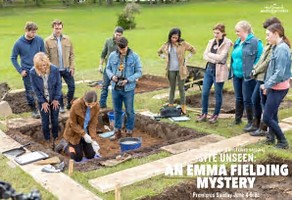 Hopefully, the other five books in the series will be made into Hallmark movies. It would be great for renewed interest in Emma to lead to more Dana Cameron archeological novels.

Which of your favorite mysteries have been made into movies, and what did you think about the cinematic result?

Movies and TV have a tough job competing in an hour or two with all the nuances an author can pack into a 300-page book. I don't watch a lot of TV, and I rarely prefer a movie over the book. The ones that seem to do the best job are thrillers, of which the Jason Bourne series immediately come to mind, as well as Clancy’s The Hunt for Red October.

I enjoy the TV versions of Ann Cleeves's Shetland novels: excellent photography, script, and actors. The latest TV movie used the same characters, but the plot wasn't based on a book. They did a fine job.

Nice recap/review here, Paula! I've not seen yet (we cut back on our cable too) but hope to catch. Enjoyed getting some of this even second-hand!

How exciting to have your characters spring to life on the screen!

While the different demands of video vs. the written word inevitably cause changes, both are popular forms of communicating with our audiences.

I am very fond of a number of BBC series that bring mysteries to life this way. Hamish McBeth is the one that comes to mind immediately.

Paula, there have been some books read in my two book clubs made into movies. I was always just a little disappointed when they made changes. I have to admit that I haven't read this series, but I'm putting it down to order because they sound like books I'd love to read.

It's almost impossible to be cinematically true to a book. What works on the page does not often translate well to the screen and the slower pace of written development would not work well in the slam-bang 2017 visual world of tv viewers. I think good screenwriting and good novel writing use different muscles, housed in the same body, of course. Anyone who can do both has my undying admiration.

I enjoyed Bones, based on the Kathy Reichs series. The overall story was true to the books, but none of the storylines were the same of course. Nor would I expect them to be. They worked though as do the books.

Nice review of the process, Paula. Recently, I had the pleasure of seeing the movie version of Nancy Pickard's The Scent of Rain and Lightning at a festival in Kansas City. Though it's not the same as the book, I liked it so much I have tickets for another showing in a couple of weeks at the Free State Festival in Lawrence, KS.

Jim - The Hunt for Red October is one of those movies I'll watch every time I run across it on TV. The first Bourne movie falls into that category, too.

I liked your response about books and movies - different children of the same mother. I'm also a fan of Dana's Emma Fielding books and scratched my head a bit at some of the changes made, but at the same time I was thrilled to see her work on the screen!